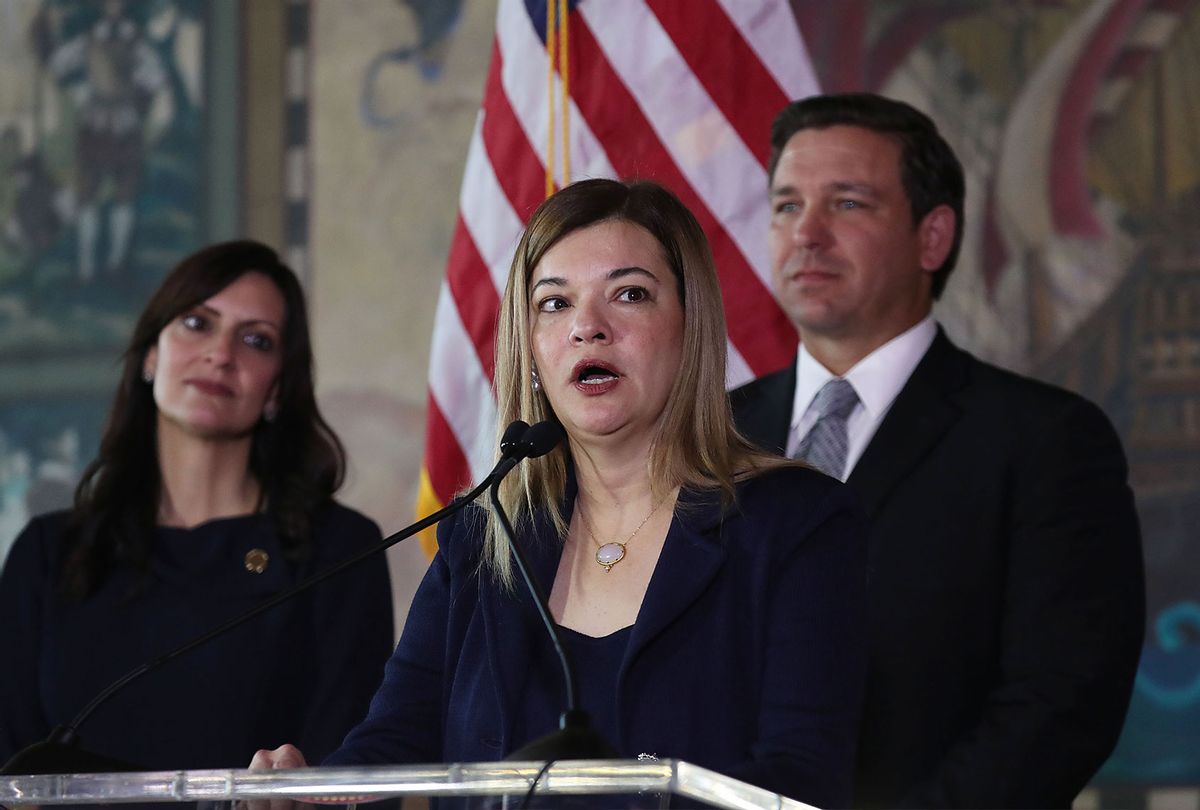 Judge Barbara Lagoa was appointed to Florida's 11th Circuit Court of Appeals less than one year ago by Trump. She is one of two Trump appointees on a three-judge panel which will decide whether the effort by the president's senior campaign strategist Jason Miller to revive a $100 million defamation suit against Gizmodo may advance.

Miller has sued the media conglomerate over a 2018 article in its now-defunct subsidiary website Splinter reporting that he drugged a woman with an abortion pill without her knowledge after learning she was pregnant.

Splinter reported that the allegation came in a court filing from A.J. Delgado, a former Trump 2016 campaign aide. Delgado has been engaged in a bitter custody dispute since 2017 with Miller, a married man who fathered her child while they worked on the campaign. Delgado claimed in a court filing that the alleged smoothie incident involved another woman, whose identity she did not publicly reveal.

Miller filed a $100 million defamation suit against Gizmodo Media and Katherine Krueger, the reporter for Splinter. He denies the allegations.

A Miami-based federal district court judge tossed out the case a year ago, ruling that the report was a fair and accurate summary of a judicial proceeding — and therefore shielded from libel charges. Miller appealed that ruling, and the court heard opening arguments last month.

The appeal hangs on Miller's argument that the "fair report privilege" should not apply, because the filing cited by Splinter was been under seal at the time of publication. However, Gizmodo claims that the document was available for at least a three-day window before Miller's lawyers filed to seal it. Because the court did not automatically seal the document, Gizmodo says it had a fair claim for publication under New York law.

The two Trump-appointed judges on the panel — Lagoa and Andrew Brasher — "seemed friendlier to Miller's case," according to a Politico report on the initial hearing last month.

For a Supreme Court nominee, Lagoa's judicial experience would be thin by historical standards. Lagoa has about nine months of experience on the federal bench, and she previously served for less than one year on Florida's Supreme Court.

In addition to the Miller case, Lagoa is also currently ruling on a challenge to a Florida law requiring anyone with a serious criminal conviction to pay all fines and legal obligations before they can vote. Florida is a key swing state in the 2020 elections.

In July, Democrats on the Senate Judiciary Committee wrote to Lagoa and Brasher, along with Trump appointee Robert Luck, asking them to recuse themselves from the case. The senators cited judicial ethics rules barring judges from ruling on cases if their impartiality can be "reasonably" questioned. Though Brasher recused himself, Lagoa and Luck did not.

Lagoa's potential conflicts of interest in that case may go beyond her connection to Trump. During her short stint on Florida's Supreme Court, the judge ruled to reverse a decision invalidating the felon voting law. She argued that the federal case is different from that state-level case, a difference that some see as a gray area when it comes to recusal.

The Trump campaign views Florida as a must-win on its path to electoral victory Nov. 3.

Lagoa, a Cuban-American from Florida, was also featured on Trump's Sept. 10 list of potential nominees.

Financial affidavits from Miller's child support case, reviewed and first reported by Salon, showed the Trump adviser has consistently argued for years that he is broke despite simultaneously reporting incomes anywhere between $20,000 and $67,000 a month. His August affidavit showed a $35,000 monthly income starting in June, when he joined the Trump campaign. However, the campaign has not disclosed any payments to Miller or other top staff members.

Delgado has publicly claimed that Miller may be financially "desperate" to overturn the initial ruling on his $100 million lawsuit.

"It's Lagoa who decides it," she tweeted. "So she was placed on this list and now has to rule in Miller's favor."

Federal judge Amy Coney Barrett has been reported to be the front-runner to replace Ginsburg. Trump said Monday that he intends to announce a decision by "either Friday or Saturday."