Why America’s political fights are as fake as pro wrestling 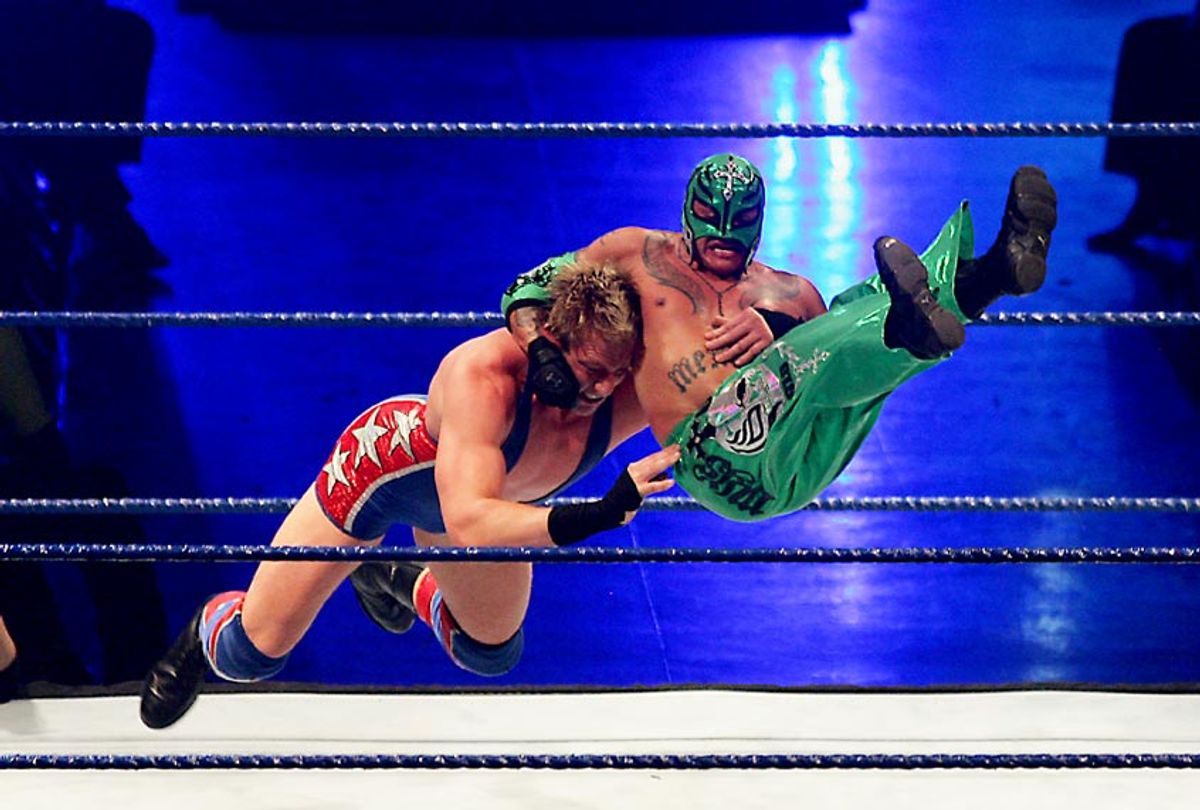 I recall being devastated when I learned that the professional wrestling I watched as a kid was fake. How could combatants show such contempt for their opponents in the ring and yet all work for the same company?

Years later, I felt similar distress when I learned that our national politics is as fake as pro wrestling. On television, our leaders appear to do battle—they tear up speeches, name call, and thump their chests. But behind closed doors, our two dominant political parties are working for the same group of wealthy donors.

As academic studies have shown, the wishes of ordinary Americans have little or no impact on the makings of federal government policy. (The single exception to this rule is for issues that don't impact the bottom line of the investor class, such as reproductive rights and identity politics; on these issues ordinary Americans can sometimes get their voices heard.) In other words, your opinion about most important issues carries zero weight unless you are a major donor or a bundler of donation checks. These truths about American politics help explain why the largest single voting bloc in America—nearly half of eligible voters—choose to stay home on election day.

Since the coronavirus forced businesses to shut down, our economy has lost 40 million jobs, and millions more workers have had their wages cut or been forced to work part-time. Desperate to maintain their profits, many large corporations are planning additional massive layoffs. The temporary relief provided to working people included onetime $1,200 stimulus checks and $600 unemployment supplements that expired this summer. Tens of millions of Americans cannot pay their rent and are at risk of eviction. The lockdown has also forced U.S. cities and states to cope with plunging sales and income tax revenue by slashing social services and depleting their pension funds savings to pay bondholders. Many experts are predicting a new pandemic of homelessness if nothing is done.

In this environment, Congress returned from its summer vacation and chose to do nothing to help working people. This should not surprise us. The major donors to Congress are doing just fine. They were saved from any loss by the CARES Act passed in March in which, as the rapper Ice Cube recently explained it, "[Congress] just pulled $3 trillion out their ass and gave it to their friends." In fact, the amount injected into financial markets to save their friends, i.e., donors, was closer to $10 trillion when Federal Reserve credit is added to U.S. Treasury allocation.

The country faces other crises. But our leaders' ability to even propose solutions is constrained by their allegiance to the donors. The West Coast of the United States is literally on fire due in large part to climate change. Yet neither party will take on fossil fuel production. Republicans deny the science surrounding greenhouse gases while the Democrats wish away emissions by supporting unproven technologies to capture carbon emissions from ongoing fossil fuel operations. Neither approach comes close to saving the planet.

Most Americans would like to see an end to foreign wars and a reduction in the military budget that consumes over half our country's resources. But these voices cannot be heard because wars are too profitable for the investor class and because the arms manufacturers donate so generously to both political parties. While Democratic lawmakers like to tell viewers of cable news that President Trump is a madman and a Russian agent, they overwhelmingly approved giving him $740.5 billion to wage wars throughout the globe, although Congress has not declared war on another nation since 1942, and despite the Constitution's mandate that Congress must declare war before unleashing death and destruction on other nations.

In 2019, the United States spent more money on our military than the next 10 countries combined. A recent study at Brown Universityestimated more than 800,000 people dead and 37 million people displaced in U.S.-led wars since 2001, at a cost of $6.4 trillion to U.S. taxpayers. As long as the U.S. continues squandering its resources on war, it cannot solve other issues like the destruction of the environment, crumbling infrastructure, access to health care, and education. Yet, because of the war industry's ownership of both political parties, no serious debate is even allowed. Joe Biden has already assured war-industry donors that if he's elected, there will be no major reductions in military spending.

The connection between military spending and the destruction of the planet could not be more clear. First, the U.S. military is the biggest polluter and consumer of fossil fuels in the world. Then it was recently reported that as Oregon battles the worst wildfires in living memory, more than half of the state's National Guard helicopters are unavailable to help fight the fires as they are deployed in Afghanistan.

At least in professional wrestling, we were allowed an open debate about the merits of corporate ownership of the combatants and about the extent to which the epic battles between the Sheik and Dick the Bruiser were choreographed. But in our national politics, open debate has effectively been squelched because it is too threatening to the donors.

For example, tens of millions of Americans have lost their health insurance during the pandemic. Yet little debate is permitted in the halls of Congress or in the corporate press about national health coverage or Medicare for All, something every other government in the civilized world provides to its people. Indeed, our neighbor to the north has been far more successful at limiting the spread of COVID-19 than the U.S. due in large part to its universal health care system. As a Canadian health official recently explained, "People [in Canada] don't have to pay for a test," and they aren't "worried that if they got sick they would not be able to get care." Also, the structure of the Canadian system makes it easy for officials to cooperate and consolidate their approach, both nationally and provincially.

But to have an honest debate about health care in the U.S. would threaten the profits of a private health insurance industry that claims a large cut of our health care dollars and imposes on us a nightmarish morass of paperwork and bureaucracy. Yet this useless industry, which provides no actual care for the sick, writes large checks to lawmakers in both political parties and is thus protected in the halls of Congress and in the corporate press.

Even in the Democratic Party, where 85 percent of Democratic voters support Medicare for All and where a candidate for president ran on that platform and nearly won the nomination, debate has effectively been suppressed. Some will recall that vice presidential nominee Senator Kamala Harris was once a cosponsor of Vermont Senator Bernie Sanders' Medicare for All bill in the Senate. But she quickly reversed her position, presumably after hearing from the major Democratic donors. This betrayal of the people didn't earn her many votes in the presidential primary. But it did earn her a spot on the party's national ticket. At August's Democratic National Convention, any discussion of Medicare for All was effectively prohibited. Even Senator Sanders was not allowed to discuss his signature issue during his speech at the convention. Further, the party's leaders successfully defeated an attempt to include the overwhelmingly popular proposal in the party's platform.

There is one group of Americans, besides mega-donors, who have the power to get their voices heard. They are professional athletes. In August, Milwaukee Bucks players went on strike to protest the Kenosha police shooting of Jacob Blake. There was reportedly significant momentum among a certain group of players to walk away from the season to protest police brutality and the disproportionate use of deadly force by cops against Black men and women. So serious was the threat posed by these players that former President Barack Obama was enlisted to talk the players out of striking. While the NBA season was saved, the episode showed the potential power of professional athletes who someday might join with the voiceless majority of Americans to demand some of the things the big-money political donors won't let us have—such as health care, jobs, a living wage, the preservation of the planet Earth, and an end to foreign wars.

Leonard C. Goodman is a Chicago criminal defense attorney and co-owner of the newly independent Reader.