Disunited states: Could a second Civil War — and an end to the union — really happen? 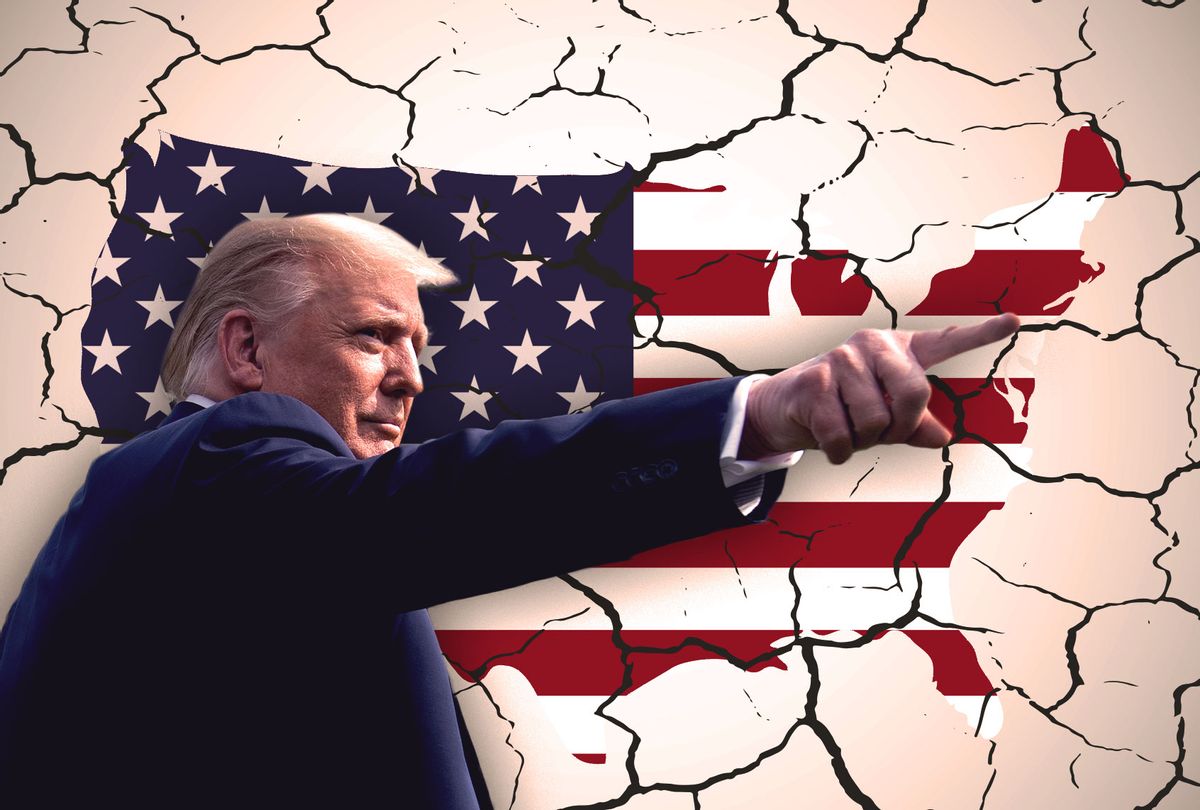 On Sept. 11, Donald Trump proclaimed on Twitter that: "Pelosi and Schumer want Trillions of Dollars of BAILOUT money for Blue States that are doing badly, both economically and in terms of high crime, as a condition to making a deal on stimulus — But the USA is coming back strong!"

Trump was widely mocked in response for being too ignorant to understand that "blue states" are part of the United States.

People enjoy laughing at Donald Trump, perhaps because they think it will somehow save them from his wrath, cruelty and violence. It will not.

Trump's statements about "Blue States" are just another obvious illustration of the fact that he is not really president of the United States of America. Through his behavior Trump has shown that he is actually the authoritarian Great Leader of his followers only.

Moreover, he has little or no respect, love, care or concern for them either — except as a means of keeping himself in office indefinitely so he can enrich himself, his family, and other close allies.

Trump is not merely indifferent towards those Americans in "blue states" and elsewhere who do not support his regime. He is actively hostile and violent towards them. He has sabotaged aid to the coastal states early in the coronavirus pandemic. He ignored California and Puerto Rico when they have faced natural disasters and environmental calamities. He has encouraged armed militias to stage threatening demonstrations in Democratic-governed states such as Michigan. He has unleashed federal police against protesters in Portland and elsewhere who oppose the regime. He has pursued an overall strategy of stochastic terrorism against Democrats, Black Lives Matter activists, anti-fascists and others he and his agents deem to be "enemies of the state."

Donald Trump and Attorney General William Barr have also suggested they may use the Insurrection Act to deploy the U.S. military against Americans who dare to protest if Trump somehow manages to steal the 2020 election. Barr has even speculated that Americans who protest the Trump regime should be charged with the little-used crime of sedition.

In total, Trump's followers understand that they have been given full permission to engage in acts of violence against his and their "enemies." This would mark one of the final steps in a campaign of Trump-inspired and commanded right-wing violence that began with the 2016 presidential campaign and is now reaching a crescendo as we head toward the 2020 election.

After two hours of speeches, approximately 1,000 demonstrators marched around the Capitol grounds to the Michigan Hall of Justice. Organizers warned those carrying firearms were not allowed to bring their guns into the Hall of Justice due to a Michigan Supreme Court administrative order.

Instead, the throng gathered on the Hall of Justice steps and chanted "U-S-A" and "Four more years" for President Donald Trump. At one point, about two dozen members of the Proud Boys, a "western chauvinist" group that was recently involved in physical scuffles during a march in Kalamazoo, started chanting "F--- Antifa!"

For decades, if not longer, the American right has fantasized about a second Civil War. With Trump as president, a season of death and suffering from the coronavirus pandemic, and a climate of intense economic ruin as well as political and cultural division, the would-be secessionists may finally get their wish.

Richard Kreitner is a contributing writer to the Nation. His writing has also been featured in the New York Times, The Boston Globe, Slate, The New York Review of Books and The Baffler. His new book is "Break It Up: Secession, Division, and the Secret History of America's Imperfect Union."

In this conversation, Kreitner explains that he sees the Age of Trump is one of several moments in the country's history where it almost collapsed into a state of civil war and widespread political violence. He says America needs a constitutional convention to address the problems in democracy and governance caused by such antiquated institutions as the Electoral College and the U.S. Senate.

At the end of this conversation, Kreitner offers a chilling and timely scenario for how the U.S. could descend into a second civil war that would finally tear red and blue states away from one another.

How are you feeling right now, with an election coming and increasing political violence by the right directed against liberals and progressives?

In the late Obama period it became more obvious to me that the United States is really not united and could quite easily come apart. Given what is now happening with Trump and his movement, I feel somewhat vindicated in that feeling. As a citizen, I feel extremely dismayed that my countrymen are so out to lunch, so far gone that they can't even be bothered to wear a mask or take the most basic precautions for the sake of their fellow human beings — much less their fellow Americans. That is very disappointing. I probably won't get over that fact until after the election, regardless of the outcome.

Talking about Trump and America is almost a kind of euphemism. It is one of the many ways that many people avoid talking about the real issue which is the possible dissolution of the United States. When people talk about the arrival of fascism in America, or Trump sending his stormtroopers to Democratic cities and possibly stealing an election, what are the remedies there? What are we talking about doing in response?

One option is violent revolution. But I doubt that would succeed. The other possible remedy is secession. I believe that we are going to hear many more people discussing that possibility in the near future.

What is the role of extreme political polarization — especially by Trumpists and other "conservatives" — in your narrative of America's disunion?

What we are learning as a people in the Age of Trump is that what holds the United States and the constitutional order together is a matter of habit and practice. I would perhaps go so far as to say inertia. The United States has really not been able to agree on institutional arrangements that would make for a stable and unified nation.

This goes back to the Founding, where at the Constitutional Convention the framers split the difference between states' rights and what we now call nationalism by making the House of Representatives represent the people and the Senate represent the states. It was called a "compromise," but in many ways it was a surrender.

As an example, I think immediately of the 1790s, which was probably one of the most tumultuous and divisive periods in American history. We tend to think of the Constitution as this great, glorious document that created one nation inseparable, but the United States almost collapsed into civil war on multiple occasions.

The 1796 presidential election was absolutely vicious. The country was as divided as it has ever been. It was very much driven by a partisan press where you had different members of the cabinet subsidizing their own newspapers to fight each other.

The 1850s is another fascinating example. Yes, it was polarized, but as today, there was this large group of people on what we would now call the left who were saying, "We're not polarized enough: There are Northerners who give too much to the South. It's the forces of unfreedom. They compromise too much." They called them "Northern men with Southern principles." These were the radical abolitionists, and they were trying to push the country to come to some kind of reckoning with whether it was going to be a slave society or a free society.

These are the heroes of my book, the disunion abolitionists. There were voices saying the Union should break apart if it's not going to stand for liberty. I believe that is the kind of moment America is at right now.

The United States never resolved the first civil war. The idea of a second civil war has been around literally since within months of the end of the first one. Too many Americans do not appreciate that fact. We think that the Confederates and the South were defeated. They were chastened. They came back. They loved America, but only if the Union was reconstructed on their terms. When it was, the Confederates, white Southerners, formed the Ku Klux Klan — which still exists today.

The threat of civil war has always lingered anytime white supremacy in America has come under threat. The forces of white supremacy tried it once. They want to try it again. They lost the civil war the first time. But as we know, they were not vanquished.

If you were called to testify at a 21st-century constitutional convention — which the right has been trying to convene for several decades as a way of forever enshrining its power — what would you suggest be changed?

We do need another constitutional convention, because I do not see another way out of the stalemate that we are in at present. As a country we need to get together and hash out fundamental questions about what kind of country we want and maybe some kind of bargain will be made.

Thomas Jefferson's idea was to rip up the Constitution every 19 years and rewrite it. I would not go that far, but I certainly think that two and a half centuries is enough time.

As for my suggestions, I would abolish the Senate. That is most important. Getting rid of the Senate would make for a much more functional country given how much it exaggerates the power of small states. The Electoral College should also be eliminated.

I think we also need to expand the House of Representatives, because each representative now represents 30 times the number of constituents that they did when the United States Constitution was written.

Red states have a lot to lose. The federal cash payments overwhelmingly go from blue states to red states. What do blue states have to lose? The idea of an American union is very powerful culturally and politically. A crumbling United States is to everyone's disadvantage.

It makes economic sense to be one country and it makes emotional sense to be one country. I have traveled very widely in the United States. I love America. Even Trump supporters are my own fellow Americans. I do not really want to break up with them, but I think it needs to be a viable option depending on what happens next. Moreover, how do we feel about the people with whom we agree and sympathize very deeply with in red states? They would probably suffer considerably if the United States were to break up.

If your book was optioned for a movie, or a think tank approached you to create a plausible scenario for how the United States could potentially break up or fall apart, what would it be?

What is happening right now would be my scenario. There is an out-of-control pandemic. There is a president in Donald Trump who is unbelievably ignorant, utterly incompetent, a liar and so many other horrible things.

There is an election that is existential, one of the most important in American history. There are many millions of guns in the United States and lots of discussions by the right wing about using them. The issues that led to the first civil war remain in many ways unresolved. There is a massive reckoning over the country's own history that has been long postponed. Resolving such matters is rarely peaceful. There are also foreign adversaries and other forces who are interfering in the election. All the elements for the story are present right now in America.