Is Trump's Supreme Court strategy self-destructive — or his pathway to a second term?

You'd think Republicans would want to use this open seat to drive turnout. They have a different goal in mind 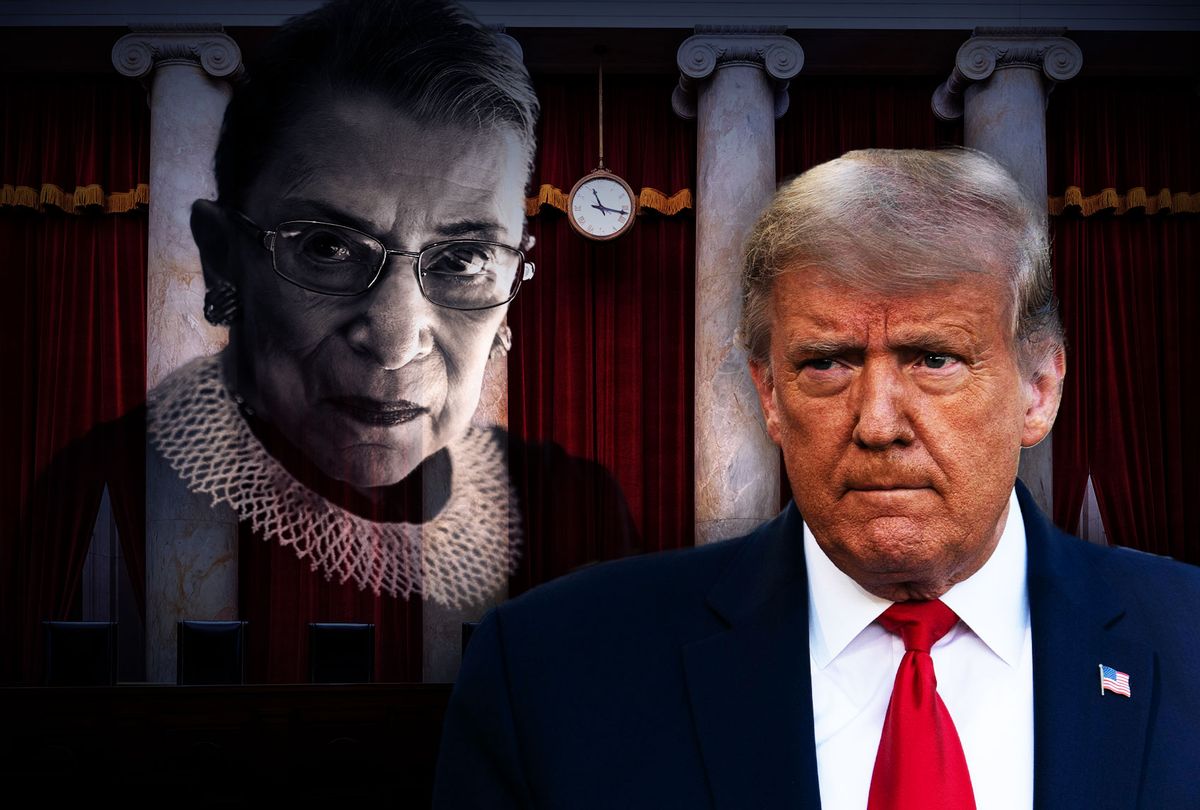 President Trump repeatedly says that he's accomplished more than any president in history. I've never heard anyone ask him to lay out specifically what he means by that. He can try to take credit for signing big tax cuts for the wealthy, but that was passed by the Republican Congress with little input from him. It's true that his executive branch agencies have overturned many environmental rules and other regulations, but he hasn't been involved and clearly doesn't know the details.

Trump's corruption has given his consigliere, Attorney General Bill Barr, the opportunity to further his own "powerful executive" theory. His craven pandering to white supremacists and the evangelical right has kept the base bonded tightly to the Republican Party. But beyond that his list of accomplishments is nil. He has literally done nothing but run his mouth and turn the U.S. into an object of fear and pity around the world

But as much as Republicans no doubt cringe at his ignorant antics, they have exactly what they always wanted. For all his embarrassing narcissism and ineptitude, Trump is the personification of what Republican operative Grover Norquist once told a group of activists a few years back was the perfect president:

We are not auditioning for "fearless leader." We don't need a president to tell us where to go. We know what direction we want to go. ... We don't need someone to think it up or design it. Pick a Republican with enough working digits to handle a pen to become president of the United States.

Trump doesn't know what his great accomplishments are, nor can he explain what he plans to do in his second term other than "more of the same," whatever that is. That, in large measure, is exactly why he has the continued loyalty of the officials in his party.

The mere fact that Trump has the working digits to hold a pen has allowed Mitch McConnell and the far-right Federalist Society to pack the courts with extremist judges, many unqualified and all of them young. They've allowed Trump to think he did something special. But that happened because McConnell blocked dozens of Obama's nominees, including, of course, Merrick Garland, whom Obama named to the Supreme Court and who didn't even get a hearing. Then McConnell coerced Justice Anthony Kennedy to retire, and got tragically lucky last week with the untimely death of Justice Ruth Bader Ginsburg.

Trump had absolutely nothing to do with any of that beyond warming the desk chair in the Oval Office and signing the pieces of paper they handed him. His bragging about his "legacy" on the courts is a joke. If it's anyone's legacy, it's McConnell's.

As Salon's Andrew O'Hehir has argued, McConnell is more or less in a win-win situation whether the vote on the next Supreme Court nominee is held before or after the presidential election. He either gets his own legacy sealed with a 6-3 extremist majority for a generation or, if he is forced to wait, his endangered Senate Republicans have something to juice right-wing turnout, potentially saving McConnell's Senate majority. Whether they win or lose in November, they have till January to complete the confirmation and will probably get the seat anyway.

As of Tuesday, it appears that McConnell has the votes to confirm whichever young, far-right woman he and the Federalist Society have chosen for Trump to nominate. Unless the Democrats decide to pull out all the stops to stall the confirmation — which is implausible, based on everything we know about their behavior — Trump's choice may very well be seated just before Election Day.

I had initially assumed that Trump was being foolish to rush the confirmation. After all, if this seat is such a motivator for the base, why wouldn't you use it to ensure they come out to vote by saying that if Trump doesn't win, they may not be able to confirm his choice? Sure, they'll still have the votes in the lame-duck session but you'd think Trump would be able to convince Republican voters that the court is lost to the liberals unless they show up to vote for him. Fear-mongering is his specialty.

I had also assumed that Trump was making a silly calculation that getting a third Supreme Court seat filled during his first term would make him look like a "winner," which, in his mind, is a huge motivation for voting for him. And there would be the added, all-important benefit of owning the libs.

He's not the only one who sees this as a motivator. Take this headline from the conservative Townhall.com in which Matt Vespa dispenses with all the Republicans' hypocritical and unconvincing retreats from their previous positions on filling a seat in an election year and tells it like it is: "Shove It, Democrats. Ruth Bader Ginsburg's Seat Is Ours ... And There's Nothing You Can Do About It":

Welcome to Thunderdome, b**ches. This is the fight that distinguishes the men from the boys; who can deliver a strike to the jugular and who can't; and between who's weak and who wants to win.

Or as Trump more prosaically put it during a Fox News interview on Monday, "When you have the votes, you can sort of do what you want."

Republicans aren't trying to hide their will to power. But there is a hitch. We still sort of, kind of have a democratic system — and if the polls are correct, a large majority of voters is getting ready to reject them. So it looks as if this Supreme Court seat, and all the seats Mitch McConnell has filled in the lower courts, may have to step up and be the partisan players they were chosen to be.

On Saturday night in Fayetteville, North Carolina, Trump said the quiet part out loud, as usual:

Now we're counting on the federal court system to make it so that we can actually have an evening where we know who wins — not where the votes are going to be counted a week later, two weeks later.

On Monday he made it very clear why he is rushing the nomination through:

Vice President Mike Pence made the same point, emphasizing the need for nine justices to decide election cases about "mail-in ballots." (Apparently, they've decided they can't count on Chief Justice John Roberts to do their bidding.)

Republicans have hundreds of lawyers spread out across the country prepared to file lawsuits and Bill Barr stands ready to bring the full force of the federal government to bear, despite the fact that it is not a party to state elections.

So I thought Trump was being shortsighted in his desire to "win" this battle before the election — but maybe I was wrong. Frankly, I'm pretty sure that if the Republicans thought he could win the election outright they would have persuaded him to use the open Supreme Court seat to help him get out the vote. But they all know that he's extremely unpopular and highly unlikely to win a free and legitimate contest. So they've decided to try to re-run the disastrous 2000 election and have their partisan majority on the Supreme Court install Trump for another term instead. It worked marvelously the first time around — and it's probably their best shot.