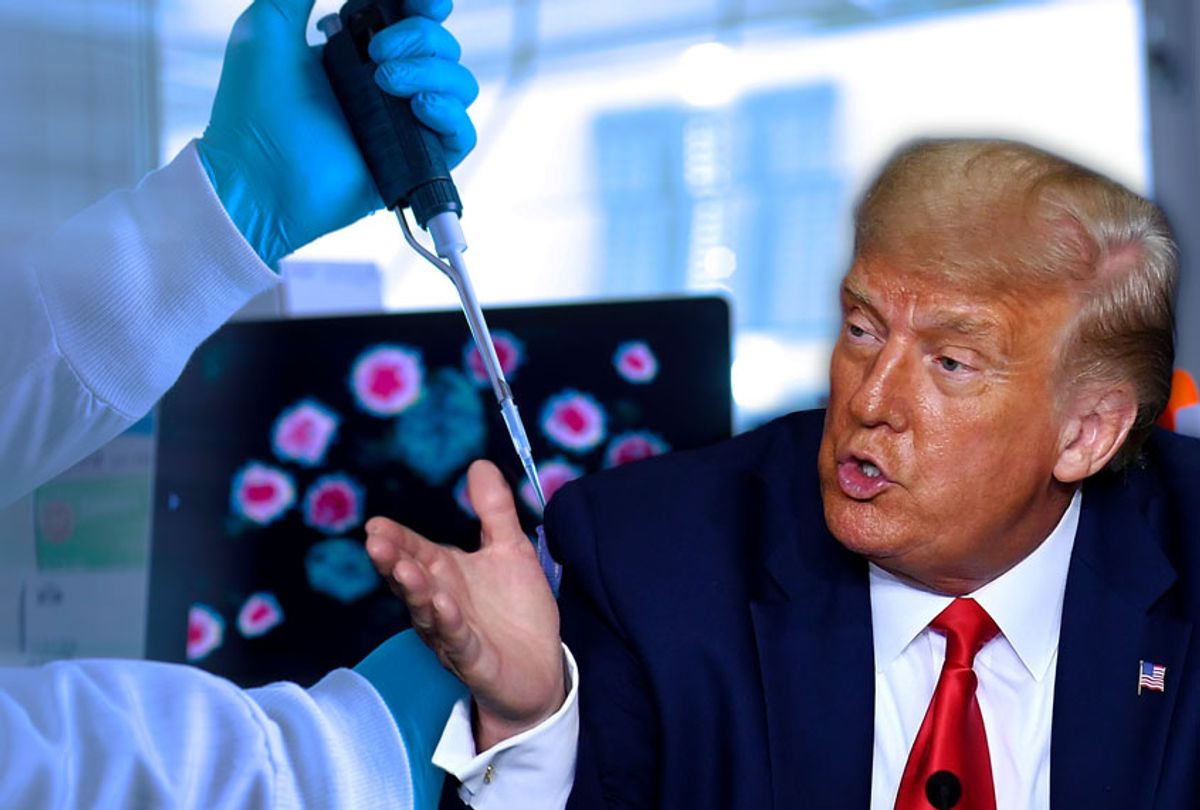 The former pharmaceutical executive tapped by President Donald Trump to lead the administration's race to a COVID-19 vaccine is refusing to give up investments that stand to benefit from his work — at least during his lifetime.

The executive, Moncef Slaoui, is the top scientist on Operation Warp Speed, the administration's effort to develop a coronavirus vaccine in record time. Federal law requires government officials to disclose their personal finances and divest any holdings relating to their work, but Slaoui said he wouldn't take the job under those conditions. So the administration said it's treating him as a contractor. Contractors aren't bound by the same ethics rules but also aren't supposed to wield as much authority as full employees.

Slaoui agreed to sell stock worth $12 million and resign from the board of Moderna, the developer of a leading potential vaccine. But Slaoui insisted on keeping his roughly $10 million stake in his former company, GlaxoSmithKline, another contender in the Operation Warp Speed vaccine race. "I won't leave those shares because that's my retirement," he has said. GlaxoSmithKline, working with Sanofi, has started human trials for a coronavirus vaccine using similar technology to Sanofi's flu shot. It is supported by up to $2.1 billion from the U.S. government.

As a concession, Slaoui committed to donating any increase in the value of his holdings to the National Institutes of Health.

But Democrats on the House Committee on the Coronavirus called the commitment "toothless." According to newly released records from the committee, Slaoui's contract with the government specifies that the donation "may occur on the last death of the employee and his or her spouse." Slaoui is 61 and his wife, Kristen Belmonte, is 50.

"That means he's going to live out his life with those profits," said Craig Holman, a lobbyist with the advocacy group Public Citizen who has filed multiple ethics complaints about Slaoui's service. "It's so clearly an all-out evasion" of the law against conflicts of interest, Holman said.

Slaoui declined to be interviewed through a spokeswoman. "I have a personal compass in ethics and people who know me personally know that," Slaoui said in a July podcast interview with Michael Caputo, the Department of Health and Human Services spokesman who subsequently left the agency after an incendiary Facebook rant accusing government scientists of "sedition."

"It's been extremely painful for me that anybody would even think that I took this job to enrich myself or my former colleagues," Slaoui said.

The White House declined to comment. An HHS spokeswoman said agency ethics officers determined that Slaoui complied with the department's rules through his contractor status, divestiture and board resignations.

"The American people are fortunate to have him as a leader of President Trump's effort to discover vaccines, therapeutics and diagnostics to defeat the coronavirus," the spokeswoman, Natalie Baldassarre, said in an emailed statement. During his time at GlaxoSmithKline, Slaoui led the development of several new vaccines, including ones to prevent cervical cancer, malaria and shingles.

HHS previously said Slaoui "does not have any additional stock holdings in any other companies involved in vaccines, therapeutics and diagnostic products developed to combat COVID-19." But in addition to Slaoui's retained GlaxoSmithKline shares, the records obtained by the House Democrats revealed he has a holding in another biotechnology company, Lonza Group, that wasn't previously disclosed. The company has a contract with Moderna to manufacture its coronavirus vaccine. Slaoui resigned from Lonza's board before joining Operation Warp Speed but kept his shares. The records released by the House committee do not show how much the stake was worth.

"Documents recently obtained by the Select Subcommittee have heightened concerns that these advisors may have significant undisclosed financial conflicts of interest that, contrary to the administration's public statements, have not been adequately addressed," the committee's chairman, Rep. James E. Clyburn, D-S.C., said in a Sept. 21 letter to Advanced Decision Vectors LLC, a consulting firm that received the contract for the government's work with Slaoui and other Operation Warp Speed advisers. Clyburn said the committee will subpoena the company if it doesn't voluntarily provide more documents.

Clyburn's committee also released records that he said suggested conflicts of interest among three other Operation Warp Speed advisers: William Erhardt, Rachel Harrigan and Carlo de Notaristefani. According to the documents, HHS certified that the companies in which the advisers have investments "are not involved in vaccines, therapeutics and diagnostic products developed to combat pandemic COVID-19." However, several of the holdings that the advisers listed are in companies working on vaccines, treatments and tests for the coronavirus.

According to the records, Erhardt and Harrigan own shares of Pfizer, the current coronavirus vaccine front-runner with a $2 billion preorder from the government. Erhardt also listed holdings in Thermo Fisher Scientific, a diagnostics manufacturer that has received millions from the federal government for coronavirus testing materials; PhaseBio Pharmaceuticals, which has two clinical trials of drugs that could treat COVID-19; and Incyte Pharmaceuticals, which is also studying a possible treatment. The third adviser, de Notaristefani, reported a financial interest in Teva Pharmaceuticals, a manufacturer of the generic drug hydroxychloroquine touted by Trump as a coronavirus treatment despite lacking scientific support.

"HHS appears to be permitting these advisors to keep these holdings, along with any profits, by certifying that 'the Government has determined' the companies 'are not involved in vaccines, therapeutics and diagnostic products developed to combat pandemic COVID-19,'" Clyburn wrote in his letter. "These certifications appear to be inaccurate."

Baldassarre declined to comment on the certifications or answer other specific questions for this article.

ProPublica's board chairman, Paul Sagan, is a member of Moderna's board and a company stockholder.