Trump said in 2016 that Roe v. Wade would be "automatically" overturned if he appointed enough justices 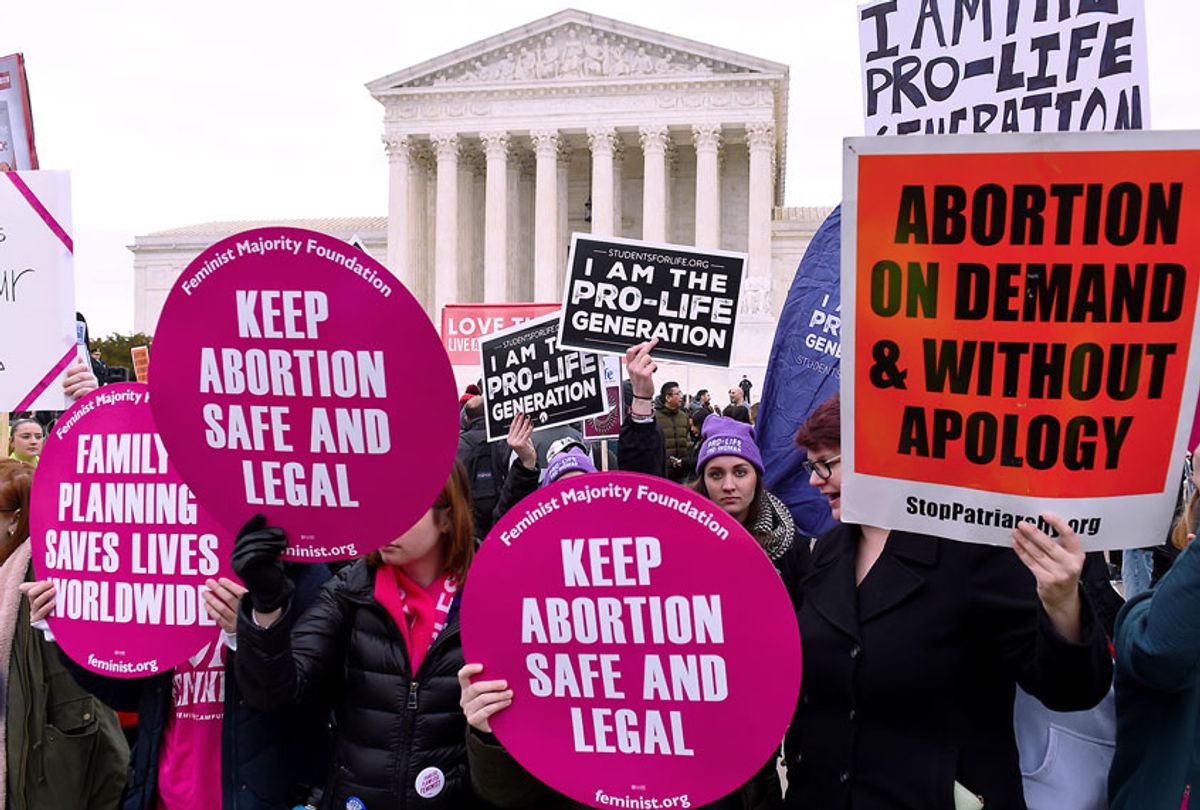 Pro-choice and pro-life activists demonstrate in front of the the US Supreme Court during the 47th annual March for Life on January 24, 2020 in Washington, D.C. (OLIVIER DOULIERY/AFP via Getty Images)
--

President Donald Trump acknowledged on Sunday that the Supreme Court may overturn Roe v. Wade or chip away at abortion protections if nominee Amy Coney Barrett is confirmed.

"She is certainly conservative in her views, in her rulings, and we'll have to see how that all works out, but I think it will work out," Trump told Fox News over the weekend.

Asked if Barrett would be part of a 6-3 ruling "on a life issue," Trump replied, "It's certainly possible. And maybe they do it in a different way. Maybe they'd give it back to the states. You just don't know what's going to happen."

Trump said that he did not discuss any specific cases when he met with Barrett.

"I didn't discuss certain concepts and certain things," he said. "And some people say you shouldn't. I don't see any reason why you shouldn't. But I decided not to do it. And I think it gives her freedom to do what she has to do. She has to make rulings."

Trump previously said during the 2016 campaign that he would nominate anti-abortion judges to the Supreme Court. Asked whether the court would overturn Roe v. Wade, Trump said, "that will happen automatically in my opinion" if he can nominate enough judges.

Trump formally announced his nomination of Barrett on Saturday. Barrett has criticized the Supreme Court's Roe v. Wade decision, though she acknowledged that the court would "probably" let the precedent stand.

In 2016, she predicted that the court would chip away at reproductive health protections.

"I think the question of whether people can get very late-term abortions — you know, how many restrictions can be put on clinics — I think that would change," she said at the time.

Democrats have also raised concerns about Barrett's strict Catholicism. Barrett, who is reportedly a member of an obscure group whose members swear a lifelong oath of loyalty and are assigned a "head" and "handmaid" that oversee many personal decisions, has said that a "legal career is but a means to an end . . . and that end is building the Kingdom of God."

Barrett is also a former member of the Federalist Society, which has been key in advancing anti-abortion judges for Trump's judicial nominations.

Planned Parenthood warned after the death of late Justice Ruth Bader Ginsburg that there were 17 abortion-related cases potentially headed to the Supreme Court after the last two abortion cases were decided by a single vote.

Senate Republicans say they plan to rush Barrett's confirmation ahead of the November election after blocking former President Barack Obama's nomination of Merrick Garland for 11 months in 2016. A New York Times/Siena College poll released over the weekend found that 56% of voters prefer the winner of the election to select the next justice.

Democratic presidential nominee Joe Biden has also warned that Barrett could help strike down Obamacare after criticizing the court's decision upholding the law. The Supreme Court is scheduled to hear a case that could decide the fate of the health care law a week after the election.

"Women could once again be charged higher premiums just because they are women; pregnancy could become a pre-existing condition again," Biden said on Sunday. "It doesn't matter what the American people want, President Trump sees the chance to fulfill his explicit mission, steal away the vital protections of the ACA from countless families who've come to rely on it for their health, their financial security and the lives of those they love."

Alexis McGill Johnson, the president and CEO of the Planned Parenthood Action Fund, framed Barrett's nomination as an attack on women.

"Trump has made it clear that he would only appoint justices who would overturn Roe v Wade, and his administration is currently asking the Supreme Court to dismantle the Affordable Care Act – we can't afford to see this nomination succeed," she said in a statement. "Nominating Amy Coney Barrett is a particular insult to the legacy of Justice Ginsburg. Barrett's history of hostility toward reproductive health and rights, expanded health care access, and more demonstrate that she will put Justice Ginsburg's long record of ensuring that everyone receives equal justice under the law at risk."