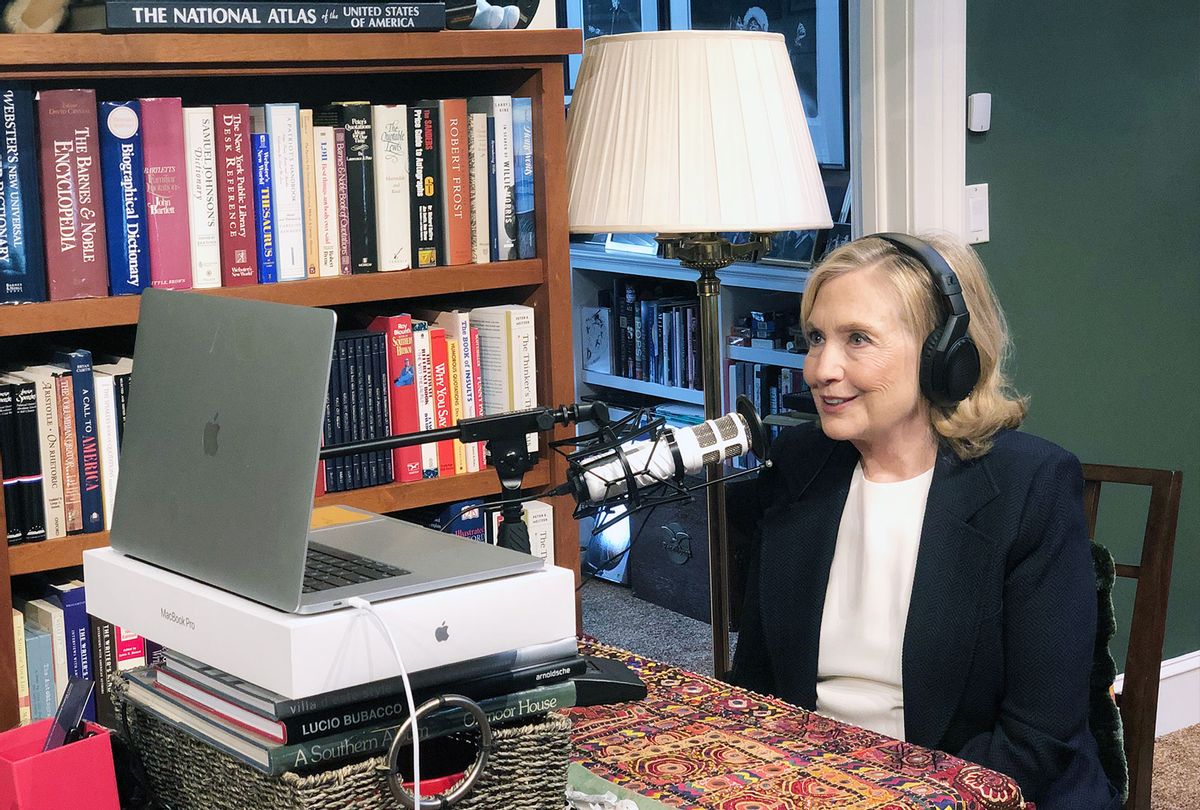 Hillary Clinton recording "You and Me Both" podcast (iHeartMedia)
--

Hillary Clinton's new podcast "You and Me Both" debuted Tuesday morning and offers both a more personal look at the former United States secretary of state and presidential candidate's life and values and a welcome opportunity to contemplate a wide variety of issues knit into our country's fabric, from the pandemic response to pop culture.

"I'm excited to bring these eye-opening, powerful, sometimes hilarious conversations to the forefront and open up new avenues of discussion with some of the people I find most fascinating," said Clinton in a release. "This podcast is a chance to talk about subjects that are too often overlooked and share the inspiration and education I've gotten from my guests."

"You and Me Both" is produced by iHeartMedia and follows Clinton's 2016 podcast "With Her," which was co-hosted by Max Linsky. That podcast was decidedly more campaign mechanism than traditional show; it was very focused on the upcoming election and there were discussions with campaign volunteers, employees and a few fellow politicians.

In that podcast, Clinton co-hosted most of the episodes, but this time she is fully in the driver's seat conducting interviews with a bevy of guests, leading the wide-ranging conversations with compassion. While politics are part of the focus, as the title indicates, it's more about trying find common ground and moving forward, both things that Americans are having difficulty with.

Here's what Salon readers should know about "You and Me Both."

What's the format of the podcast?

Each episode of "You and Me Both" comes in at about 40 minutes. Over the course of that time, Clinton "gets into some of today's biggest questions with all sorts of amazing people." Some of the topics covered include faith, grief and the mythos surrounding the "American Dream."

Is Hillary a good interviewer?

Unsurprisingly, yes. Her questions for her guests are considered and researched, but are natural enough that the conversation doesn't feel stilted; it's like listening to two friends have a (really deep) chat over a coffee.

Granted, it helps that she's chosen guests who are gifted public speakers. The first episode on faith, for instance, features Rev. Dr. William Barber II, Krista Tippett — the host of the public radio program and podcast "On Being" — and actor and former "Daily Show" correspondent  Aasif Mandvi. These are all folks who basically make their livings talking.

That said, the interviews range in tone and scope in a way I wasn't necessarily anticipating. That episode opens with Rev. Barber offhandedly telling Clinton that, as they say in the South, he's "glad to be seen and not viewed." She responds with a humorous anecdote about attending a viewing where the deceased's leg shot up straight out of the casket for no discernable reason. Two minutes later, they are discussing how, in Barber's mind, there is "no separation between Jesus and justice."

That leads into our next question.

How political is "You and Me Both"?

"You and Me Both" is grounded in politics, but in the episode and clips available for review, the name "Trump" never passes Clinton's lips. It's less about discussing the policies of specific political leaders and more about her guests' views on how our  political and social systems at large have cumulatively impacted our nation and its people.

It's also pretty future-focused; underlying most of the interview questions is another unspoken one: "What can we as a nation be doing better?"

The interview with Rev. Barber, in which he discusses current demonstrations surrounding the deaths of individuals like George Floyd and Breonna Taylor, is a great example of this.

"If we don't miss the moment, if we match our policy decisions to the mourning we see in the streets, and if we don't treat this as a spectacle event rather than recognizing this as a call for reconstruction," Barber said. "This is a moment we can fundamentally shift."

There's a lot of hope to be found in that exchange, but there's something decidedly bittersweet about listening to this podcast right now, too.

As I type this, the nation is preparing for the first presidential debate of 2020 and it's hard not to consider the fact that this woman, who can host these reasoned and compassionate conversations with such ease, could have been our president instead of a man who rambles about protesters using tuna cans as projectiles.

So, while the interviews themselves veer a little more personal than political, they will likely make you consider (or reconsider) your own politics.

How personal does Hillary get on "You and Me Both"?

A lot has been written about Clinton's perceived coldness or impenetrability. As the Brookings Institution put it in a 2017 article, "she is someone so interested in solving problems that she skips right past the emotion that drives so many voters."

The first episode of "You and Me Both," Clinton offers some background on why she has something of a wall built up in public. In her conversation with Krista Tippet — who, in a lovely turn, kind of flips the interview around to ask questions of Clinton — Clinton speaks about her religious upbringing. She was raised in the Methodist church and had a particularly influential youth pastor who took her as a young teenager to see Martin Luther King, Jr. speak in Chicago.

"I always believed that faith was a constant in my life," she said.

But then she speaks about how she was invited to speak at the University of Texas in 1993, shortly after her father died following a stroke. She used that as an opportunity to speak about religion and some of the "big questions" associated with the loss of a loved one.

"I talked about meaning and life and I remember just being ridiculed by the press," she tells Tippett. "What right did I have as a first lady to raise these issues in public?"

From that point on, she kept her religious views more private. This serves as a nice lead-in to her conversation with Aasif Mandvi, who discusses how 9/11 pushed him, as a Muslim, to make his private life and convictions more public as a way to increase cultural understanding.

"I leaned into it and I found a voice around it," Mandvi says.

And in a sense, that's what it feels like "You and Me Both" is for Clinton, an opportunity to lean into her lived experiences and present them to the public in a way that is decidedly more casual than her typical public persona.

But if you're looking for a tell-all about Clinton's life, this isn't it. It really is more focused on the lives and opinions of her guests.

What should I expect from the season?

Speaking of guests, the first season of "You and Me Both" Clinton will interview a range of guests. Over the course of 24 episodes, she's slated to speak with guests like Gloria Steinem, chef and fellow podcaster Samin Nosrat, comedian Patton Oswalt, Stacey Abrams, Ann Friedman, Sarah Cooper and "Queer Eye" personality Tan France.

The first episode of "You and Me Both" is now available and new episodes will be released weekly. You can listen on iHeartRadio here.

Hillary Clinton Podcast Review You And Me Both