Why is Trump not facing impeachment over COVID-19? 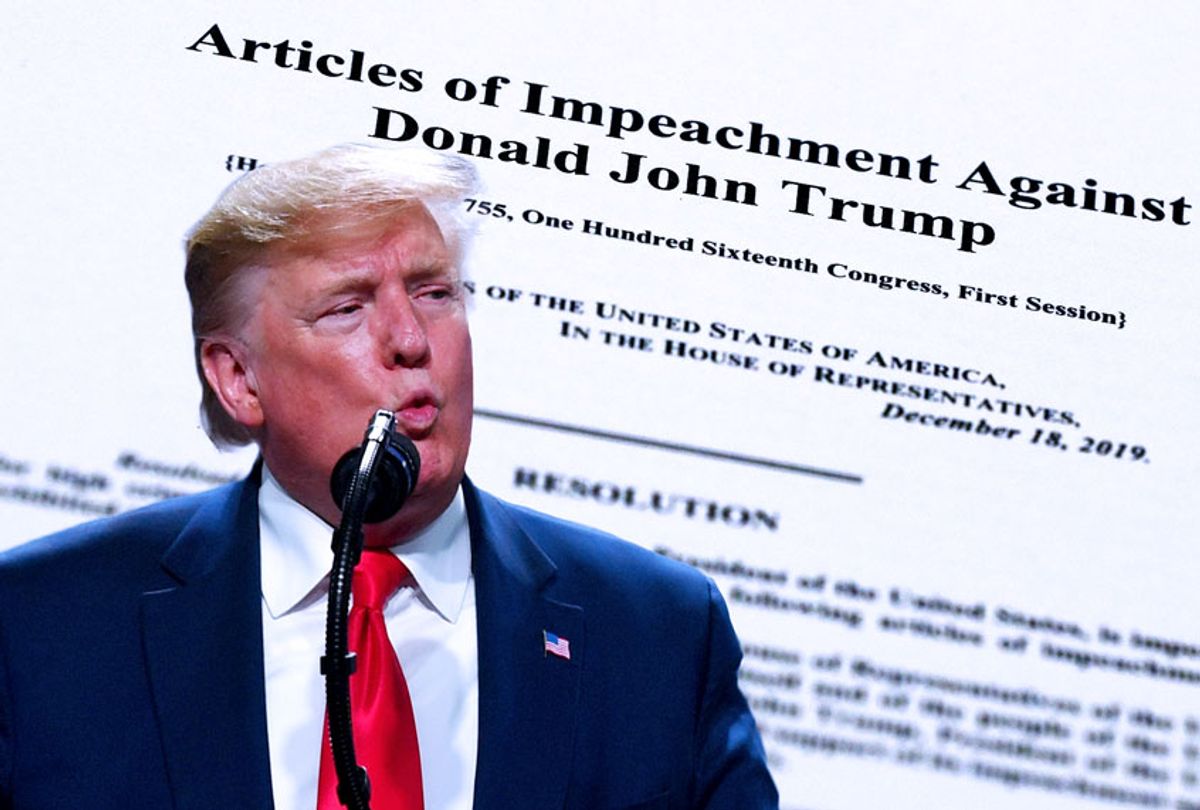 President Donald Trump and First Lady Melania have both tested positive for the coronavirus in what is perhaps the most shocking "October surprise" in the history of presidential races. If he recovers with only mild symptoms, he will undoubtedly make the case that he was right all along in downplaying the virus. If he suffers, he will gain sympathy from the public at large. Even in contracting the virus himself, he is likely to use it for his political gain. But none of this should obscure the fact that Trump's negligence on the coronavirus ought to be the greatest stain on his presidency—and that's saying a lot considering the lengthy list of his cruel deeds, lies, and many potential conflicts of interest and crimes.

If the House of Representatives felt a year ago that Trump's attempt to use his office for political gain by manipulating Ukraine's president was worthy of impeachment, then surely abrogating his responsibility to protect people from a predictable and deadly disease is far worse. The evidence of his wrongdoing is all out in the open, and the impact of it is far greater as measured in human lives than anything he has done since 2017. Not impeaching him on this issue in essence lets him off the hook for transgressions too vast to be ignored. Voting him out of office is a good short-term mechanism to stop the crime. But it is neither guaranteed to work nor is it a means by which to hold him accountable for the mass deaths he has overseen.

According to Alexander Hamilton, writing in the Federalist Papers, a president may be impeached for, "those offenses which proceed from the misconduct of public men, or, in other words, from the abuse or violation of some public trust. They are of a nature which may with peculiar propriety be denominated POLITICAL, as they relate chiefly to injuries done immediately to the society itself." If the Republican-controlled U.S. Senate can rush through a Supreme Court justice's nomination in record speed, surely the Democrat-controlled House can impeach Trump over his deadly misconduct on the coronavirus pandemic now through the November 3 election and beyond.

Just for starters, Trump lied to the American people about the coronavirus. As commander in chief, he would have known that a pandemic was a serious possibility because the U.S. military knew, and officials briefed him specifically about COVID-19 twice in January. A month later, Trump admitted in a taped conversation with journalist Bob Woodward that he was aware of how contagious and deadly it was while at the same time telling the public, "It's going to disappear. One day, it's like a miracle, it will disappear." He downplayed the disease dozens of times and continues to do so. That is all the evidence investigators need to establish that Trump deliberately lied to the American public about a deadly threat to the nation and he is therefore himself a threat to the people.

Trump didn't just fail to protect the American people—he has not even tried. Throughout his presidency, he has used scare tactics to warn against imaginary invasions of immigrants, anarchists, criminals, rapists and more. His government has countered these claims with specific policies such as harsh anti-immigrant policies separating children from parents, a violent federal crackdown on cities like Portland, Oregon, and more. But when it came to a slow-moving, deadly and very real threat such as the coronavirus, he did not take serious action beyond self-aggrandizing press briefings. Even those were stopped when reporters rightly questioned him about his lack of action. There has been no plan now for many months to prevent infections and save lives. Plenty of other nations managed to come up with ways to tackle the disease and succeeded to varying degrees.

Trump undermined the single cheapest, easiest, and most effective tool against the disease: masks. He deliberately muddied the water on mask-wearing as protection from the disease, repeatedly claiming that it might not help while alternately saying he didn't have a problem with wearing one. But researchers at the Institute for Health Metrics and Evaluation (IHME) at the University of Washington, whose model the White House Coronavirus Task Force has relied on, made clear that tens of thousands of lives could be saved by December 2020 if most people began wearing masks as late as August of this year. The U.S. Postal Service in April was readying a plan to mail 650 million cotton face masks to Americans, but the White House intervened to stop it. Robert Redfield, director of the Centers for Disease Control and Prevention, strongly emphasized mask-wearing as powerful protection during a congressional hearing, only to have Trump undermine him in public a day later. The whims of a single madman at the helm of the nation weakened the best protection for the public from the coronavirus ahead of a safe and effective vaccine being made available.

Trump had ensured that he personally remained safe (until now) but allowed the public to face risk. Aside from mask-wearing, a policy of aggressive testing and contact tracing would have been an effective tool to reduce the number of infections. But in the president's mind, exposing the extent of the disease in order to control it is a bad idea. Trump repeatedly claimed that testing was part of the problem of the disease, not the solution, because it made him look bad. He said the quiet part out loud when he told his supporters that he has asked his government to "slow the testing down, please." In other words, he has wanted to cover up the true spread of the virus. Interestingly, the White House has an aggressive protocol in place to try to ensure Trump didn't get infected, using an effective rapid-testing and contact-tracing method that is a microcosm of what the entire nation needs (minus Trump's personal undermining of his own protocol). Yet Trump's White House opposed government spending on testing and tracing for the American public. When asked why he held dangerous indoor rallies where mask-wearing was not enforced, Trump made clear that his own health was protected, as that was all that matters. Indeed, to him it was. The news that he recently tested positive for the virus despite the White House protocols shows he can't lie his way out of the dangers of the spread and dangers of COVID-19.

Instead of deploying a systematic approach to the virus based on masks, testing and tracing, Trump has instead placed bets on the ephemeral promise of a vaccine that he is convinced will be unveiled within weeks, contrary to predictions by his own government officials. Trump has poured billions of tax dollars into the coffers of private pharmaceutical companies with abandon and attempted to interfere in the vaccine approval process by the Food and Drug Administration. It is no surprise that there is deep public skepticism of vaccine safety and efficacy.

While Trump has no plan to curb the disease, he does have a plan to make himself look good ahead of the November 3 election. The CDC, whose credibility Trump has destroyed through political appointments, was supposed to be our best defense against a deadly disease like COVID-19. But according to an explosive report in Politico, the Department of Health and Human Services has drawn money meant for the CDC in order to launch a $300 million public relations campaign to positively spin the government's response to the virus. A top spokesperson for the HHS, Michael Caputo, who stepped down recently, conceived the plan, saying the ad campaign was "demanded of me by the president of the United States. Personally." One former Obama-era HHS official was shocked, saying, "CDC hasn't yet done an awareness campaign about COVID guidelines—but they are going to pay for a campaign about how to get rid of our despair? Run by political appointees in the press shop? Right before an election?"

During the first presidential debate between Donald Trump and Joe Biden, the president repeatedly claimed that 200,000 Americans dying of COVID-19 was a blessing and claimed fantastically that under a Biden presidency, 2 million would have died. His only defense for why the United States has about 20 percent of global deaths with less than 5 percent of the population was to claim without evidence that China and India's death tolls are undercounts. Not only is the current death rate in the U.S. higher than in most nations around the world, but fatalities from the coronavirus also exceed even the worst-case projections made by the IHME model that the White House frequently uses. And, as Biden rightly said during the debate, "The president has no plan. He hasn't laid out anything. He knew all the way back in February how serious this crisis was. He knew it was a deadly disease."

Laying out Trump's criminal negligence of the pandemic is an easy exercise. He has numbed the American people so much to his bluster, rapid-fire lies, gaslighting, unethical deeds and corruption, that we are giving him a pass on the mass deaths he has helped to cause by simply relying on an election to oust him. Just because we are fatigued by his endless criminality does not mean that the ever-increasing death toll from the disease ought to be swept under the rug. The staggering crime is not even over—it continues through to today and racks up more victims daily.