6 most revealing moments from the first presidential debate 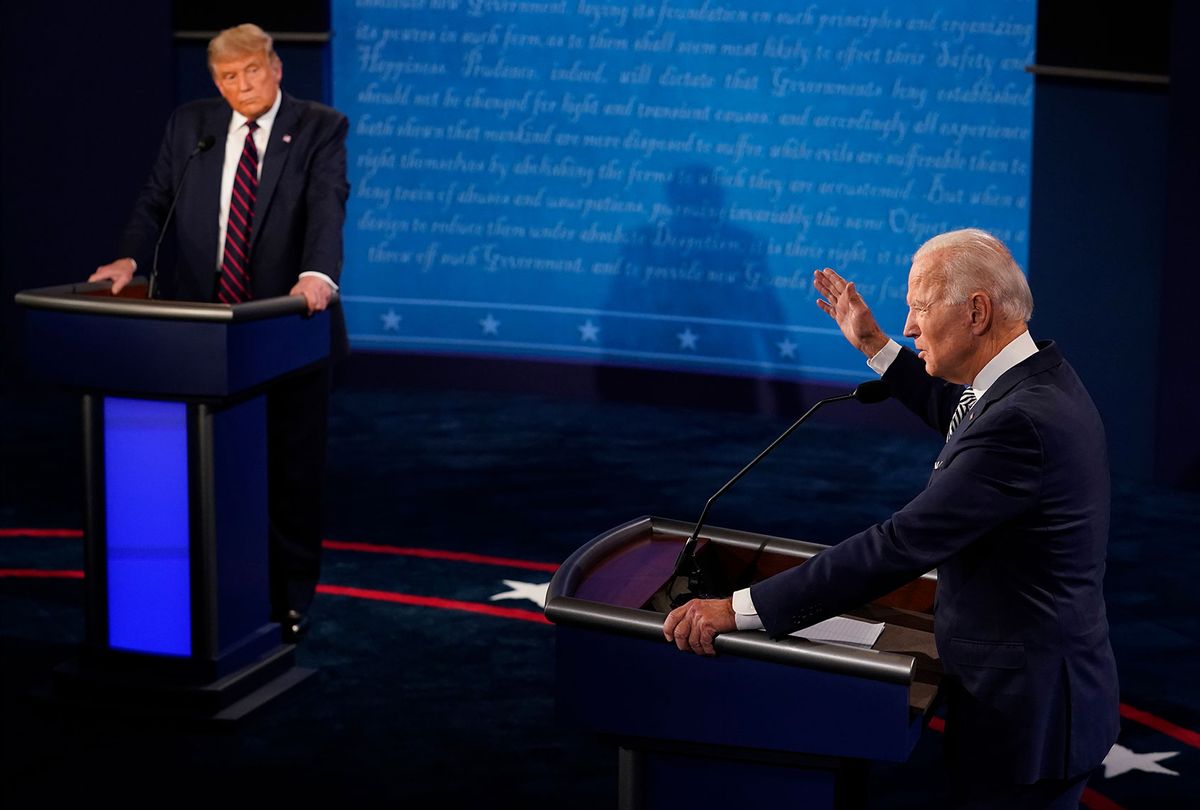 Democratic presidential nominee Joe Biden speaks during the first presidential debate against U.S. President Donald Trump at the Health Education Campus of Case Western Reserve University on September 29, 2020 in Cleveland, Ohio. This is the first of three planned debates between the two candidates in the lead up to the election on November 3. (Morry Gash-Pool/Getty Images)
--

The first presidential debate was as horrific as we feared it would be. We were barely able to hear a word from Joe Biden or moderator Chris Wallace thanks to Trump's incessant interruptions and nonstop insults. Here are the six most revealing moments:

He reiterated his baseless claims that anti-fascist groups and left-wing organizers were the ones causing violence – a narrative contradicted by multiple studies and his own national security officials. The violence Trump claims is the greatest threat facing our country does not exist. The latest draft of the Department of Homeland Security's threat assessment report characterizes white supremacy as the "most persistent and lethal threat" to national security.

2.Both Biden and Trump showed us who they really are.

One of Biden's most powerful moments was when he talked about his deceased son, Beau. I was struck by Biden's raw humanity in this moment. And how did Trump respond? By interrupting him and launching nonsensical attacks on Biden's other son, Hunter. Trump revealed the core of who he is – a cruel narcissist who has no feelings for anybody but himself. And Biden revealed who he is: a decent human being who understands the plight of loss at a time when Americans everywhere are losing their loved ones.

For four years, Trump has been promising to release his tax returns but has never followed through. Tonight was no different. He dodged Chris Wallace's questions about the bombshell New York Times report that found he paid only $750 in federal taxes in 2016. And when Biden challenged him to release his tax returns so the American people could see for themselves, Trump said "You'll see it as soon as it's finished." Hello? It's been four years. If Trump wants to refute the New York Times story, all he has to do is voluntarily release his returns. But he refuses to do so. We know exactly why.

4.Trump touted his record on judiciary nominations. But he left out some important details.

When asked about their respective records, the bulk of Trump's response was hyperbole and nonsense. But one aspect he made sure to highlight was his takeover of the courts: He's appointed 202 federal judges so far. And he didn't miss an opportunity to go after Biden, either: Trump turned his own takeover of the courts into an attack on Biden and Obama's inability to confirm judges. What he failed to mention was that Mitch McConnell refused to confirm any of Obama's judicial nominees (most notably his Supreme Court pick, Merrick Garland), and then, once Trump was elected, changed the confirmation rules so that the Republican-held Senate could ram through every single one of Trump's picks – as he's now trying to do with Amy Coney Barrett.

5.Yet again, Trump refused to accept responsibility for our staggering COVID-19 death toll.

Trump compared his response to COVID-19 to the Obama-Biden administration's response to swine flu. But the 2009 swine flu pandemic killed approximately 12,500 Americans, compared to  the more than 200,000 Americans who have died, so far, from COVID-19 on Trump's watch. Trump also floated yet another insane conspiracy theory, this time claiming that Democratic governors and mayors were keeping things shut down until after the election just to sabotage Trump. While Trump has said that the virus affects "virtually nobody," Biden made a point to empathize with the hundreds of thousands of Americans who have lost loved ones to Covid.

6. Trump ramped up his false conspiracies about voting by mail.Trump rehashed practically every one of his conspiracy theories about the previous administration. And he doubled down on his lies about mail-in voting. Here's the truth: The right-wing Heritage Foundation examined a 36-year time frame and found only 1,285 cases of voter fraud involving mail-in ballots out of nearly two billion votes cast — a rate of .0000007 percent. And Trump himself – along with nearly two dozen other senior administration officials – have all voted by mail before. Trump knows he can't win through our normal democratic process. That's why he's sowing distrust about mail-in voting and railing about "fraud" – so he can lay the groundwork to contest the election and claim it's illegitimate if he loses. Biden's response? Telling people to vote.What we saw last night was not a debate. It wasn't an argument about issues. It was a confrontation between a decent human being and a lying sociopath who refuses to commit to a peaceful transition of power if he loses.