"The Good Lord Bird" is a zany, rollicking ride through the mania of abolitionist rebellion 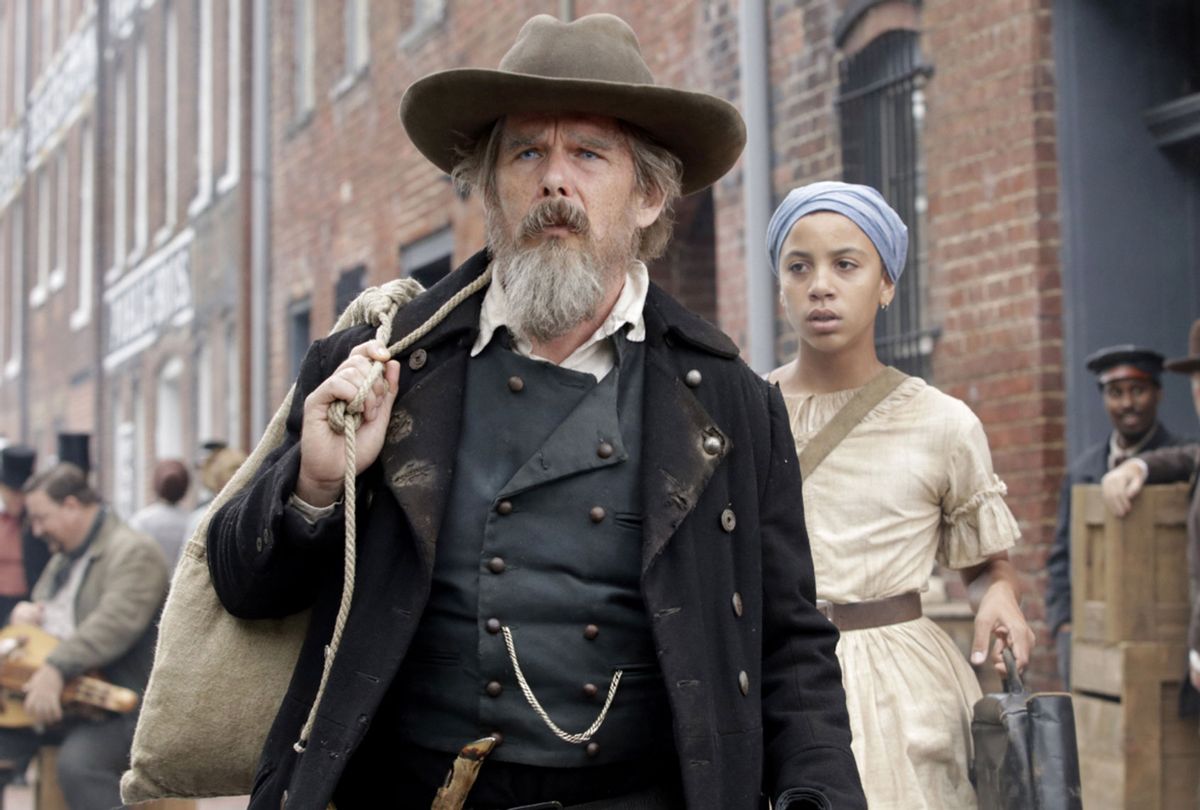 What's striking about Ethan Hawke's personification of the militant abolitionist John Brown in "The Good Lord Bird" is the grime. Road dust cakes his face, already a topography of freckles and lines without the soil. His beard is a wild advertisement for the character's unpredictable nature, and when a notion stokes a fire within his soul Hawke bellows erratically, spittle flying in repulsive globs.

This cruddy mask has a point beyond announcing the sustained ferocity Hawke brings to this role, which is . . . the filth really brings out his eyes.

Serious, the contrast between muck and iris further shouts Brown's mercurial mindset at us, helping us to understand why the man's fire and brimstone speeches ensnare the imagination of everyone he encounters. He's also comically waving his pistols at them in some scenes but mostly it's the charisma holding them hostage, not the threat of taking a bullet.

"The Good Lord Bird" hurtles forth on the power of Hawke's zeal and a performance placing him nose to nose with the viewer in every scene, regardless of whether the shots are wide or tight enough to study the specks on his face.

The actor's larger-than-life performance matches the comedic verve that James McBride poured into his National Book Award-winning novel, a comical (and zanily loose) retelling of the events leading up to Brown's doomed raid on the federal armory at Harpers Ferry, Va., in 1859.

Brown was hanged for the act and painted as a kook in many history books, but the raid and his death sparked the kindling that ignited the Civil War. Hawke's performance doesn't transform Brown into a figure driven by sense or intellectual sobriety, although his leader is not a drinker. Instead he embraces the spirit of what Brown stood for to grant him a measure of benediction while still portraying him as a man who has to be chided for kissing the muzzle of a stranger's horse or turning grace before dinner into a full-fledged sermon.

But while Hawke commands the center of attention in his seven-episode series, its writers are careful to spread substantive dialogue and center stage opportunities to all the key actors in the cast, even personalities who only appear for an episode or two. McBride's writing style takes a boisterous approach to history, helped by presenting Brown through the perspective of a wide-eyed, young Kansas enslaved child whom the leader nicknames Onion.

Joshua Caleb Johnson takes on that role and in doing so becomes the focal point of these hours if not quite its star. Johnson holds his own among a cast that includes Daveed Diggs as a pompous, preening Frederick Douglass with Zainab Jah quietly reigning over her scenes as a pragmatic Harriet Tubman. However, he's mainly the witness to history carrying the audience on his shoulder. If Johnson doesn't steal any scenes, that's because his character isn't designed for that job.

Instead the writers and Hawke focus much of their striving to make Brown's humanity bleed through his interpersonal myopia, nailing the greater point that Brown wasn't a high-strung loon so much of a man of fury and passion. The blend of comedy and tragedy woven throughout "The Good Lord Bird" brings Brown's main foibles into relief; so laser focused is he on his great God-given mission to end slavery through battle that he ignores the obvious absurdity in his midst – mainly the fact that Onion, the girl he's so proud of freeing, is a boy who feels forced to follow him.

(The story goes that Brown accidentally hears Henry's name as Henrietta during a gun confrontation that kills the boys father, and insists he wear a dress from that moment on.) And Onion, raised in bleak circumstances and taught that it's better to be protected by a disguise than die as boy who gets shot to death.

McBride inserts the dress as a constant reminder of the deceptions enslaved people engaged in to survive as opposed to using it as a gag, and Johnson wears that intent's spirit throughout the series' seven episodes as ably as Hawke carries Brown's leathery tenaciousness. And we see other moving examples of this notion in earlier episodes, notably in an enslaved woman named Sibonia (Crystal Lee Brown) who masks her cunning in the appearance of derangement.

Hawke and co-creator Mark Richard (who also executive produce the series along with McBride) hew closely to the 2013 novel's spirit, a factor that plays in its favor for the most part but cuts against it as some sequences as Brown and his band of recruits draw nearer to their fates and Harper's Ferry.

And while this enables Hawke to stretch into artistic territory that challenges the border between appropriately grandiose and too much, it also illustrates the story's current as an exaggerated example of white savior syndrome gone crazy that chooses to commiserate with those who suffer through it while forgiving the transgressor.

Putting all that aside, what matters most is that the series takes a brutish time in history frequently presented dryly out of respect, and dares successfully to capture the uproarious insanity of a righteous, outgunned rebel.  Brown's image may not be wholly transformed by this rendition of "The Good Lord Bird," but surely Hawke's work here should elevate our estimation of his skills and how far he's willing to go to resurrect our estimation of figures moldering and, if not forgotten, at least somewhat misconstrued.