What I learned about human politics from studying colobus monkeys

Colobus monkeys' alpha males can be benevolent or sadistic. In studying them, I began to see parallels to humans 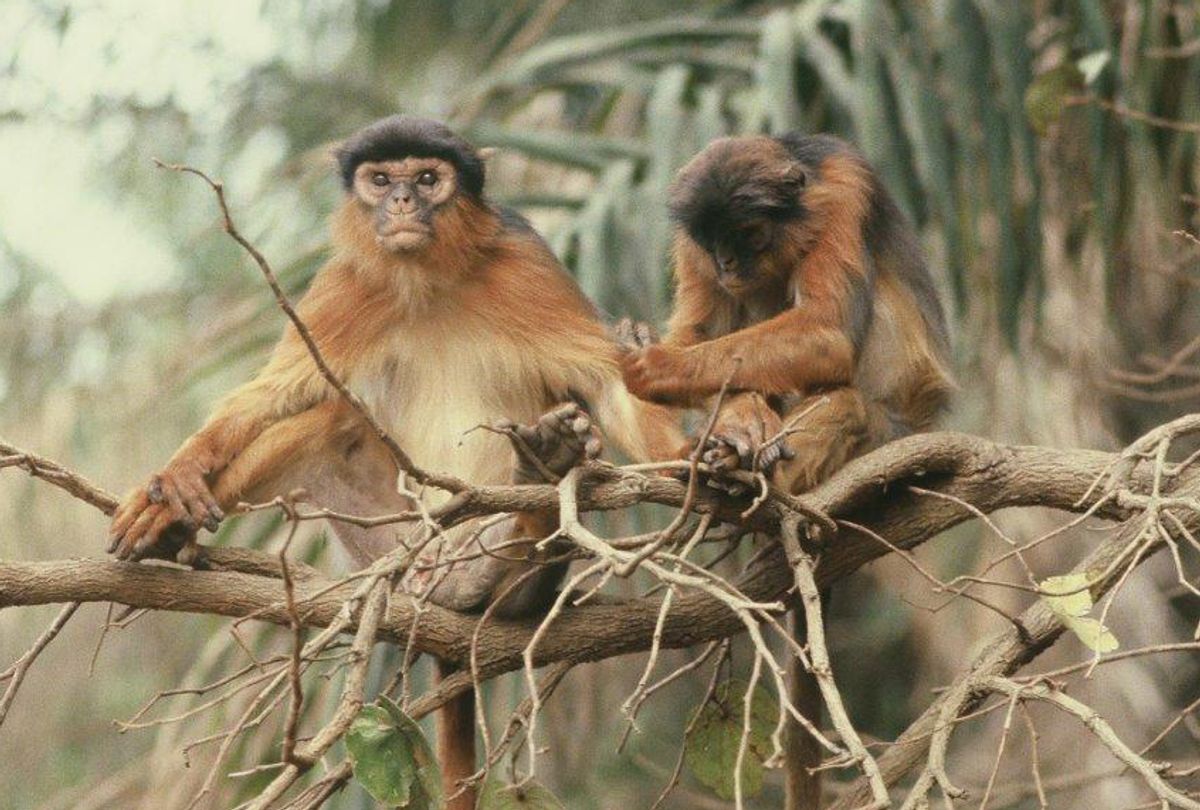 For years I spent my days, from before dawn until after dusk, following a troop of mostly arboreal, endangered western red colobus monkeys (Piliocolobus badius temminckii) around a small West African forest. For the most part, the simian soap opera taking place above my head involved domestic themes, like feeding on unripe fruits, young leaves and pieces of termite mounds; sleeping on the widest branches in the tallest trees; resting with family members and friends; and forming and maintaining alliances.

While each colobus troop consisted of a group of individuals, that associated together and shared a common home range, social groups within the troop often divided up and re-united into subgroups – sometimes for just a few hours, sometimes for days. On the whole this fluid fission-fusion type of social life was well organized and peaceful. But, as with many soap operas, from time to time life here became totally unfocused and utterly confusing. The plots—and there were many—looked familiar: sometimes sitcom, sometimes rom-com, sometimes melodrama, sometimes kill-'em-dead' bloody action and sometimes high scary political drama. The characters, each with their own individual life histories and personas, had enough variety to delight any casting director. Ranging from timid to bold, calm, cool and collected to out-of-control, supportive to back-stabbing, compassionate to downright spiteful, it quickly became clear that we are not the only creature with individual personalities.

There was the smallest adult male, Captain Crook, a benevolent alpha male.  During his two-year reign as the highest-ranking male, he appeared to think along the lines of us and we and our. He was a favorite grooming partner, a hit with the females; unusually for a male, he played with infants and frequently groomed a young orphaned juvenile female.

Patient, confident, composed, socially skilled, adaptable and the possessor of what I can only describe as a fine political mind, Crook was able to sail himself and the troop through crises. Internal disputes amongst members were easily and quickly settled, home-grown crises were short-lived and stability was fairly well maintained. While he was the alpha male, there was little uncertainty and decisions appeared to be made for the good of the troop.

Crook and his amiable wingman, the gentle, counterintuitively-named, Mr. Mean, maintained a rather aloof relationship and yet had a stable, coordinated, cohesive bond when facing external threats.  Together they led the troop into battle during territorial skirmishes and their associates, cheerleading along the way, willingly followed. Their united front and their ability to mobilize collective action resulted in fewer lost territorial skirmishes with neighboring troops. They knew how to present themselves to the outside world. Like Teddy Roosevelt, metaphorically speaking, mostly they spoke softly and yet, when necessary, they also sometimes carried big sticks.

Was benign Crook, the popular, socially-skilled alpha male, the colobus equivalent of a respected, compassionate, empathetic president or prime minister?

After Crook disappeared from the political arena, Yunk, a bully, took his place. Working alone with no allies, Yunk created havoc. Driven up the slippery dominance pole by his massive ego to gain power, he threatened all and sundry along the way: infants, juveniles, mothers with dependent young, older males, younger males and sexually receptive females. He hassled the older guys until they bowed down and accepted him as the alpha male. He harassed the younger guys until they were exiled, skulking around bushes, sneaking through trees, just waiting for him to disappear. Within days of his disappearance, three of his victims returned. Yunk's short seven-month reign ended with a new, benevolent alpha male.

Often nasty, self-serving, egotistical and unable or unwilling to curb those leanings, while Yunk was alpha male, the troop appeared to run on fear – particularly amongst the low-ranking members. Stability suffered, chaos thrived, internal strife was an everyday occurrence, territorial disputes were often lost and female immigration slid downhill.

Yunk appeared to lack the simian equivalent of social intelligence and emotional maturity, and the troop suffered for it. Yunk was always on edge, full of malice and loaded with active schadenfreude, constantly indulging his dark side. He was almost a caricature of the so-called beastly animal. Were the parts of his brain that contain the theoretical colobus empathy circuits absent, or barely functioning? Can a colobus be born bad?

Was malignant Yunk, the ticking-time-bomb, with an almost maniacal determination to achieve power and status, the colobus equivalent of a dictator?

With each passing day spent with these red- and black-haired, potbellied, thumbless, sometimes clumsy acrobats, it became more and more obvious to me that many things happening in this simian population were likely to have evolutionary continuity with what happens both with and to us humans.

While humans and colobus are very, very distant relatives, separated by over 20 - 25 million years of evolution, they are far more like us than many would like to admit. Or as Darwin pronounced almost 150 years ago, "The difference in mind between man and the higher animals, great as it is, certainly is one of degree and not of kind."

For me, the similarities were most obvious — sometimes frighteningly obvious — when it came to the distribution of power and the uses and abuses of some alpha males. The more time I spent with them, the more evident parallels emerged between their social, psychological and political journeys and ours.

Many of these lessons related to leadership. A first-class alpha male colobus needs to weigh costs against benefits, to communicate clearly, gather and cooperate with allies, uphold collective confidence, maintain awareness of other troops and avoid senseless battles. He sees how all the parts of the social, political and physical environment relate to the whole, and always looks both inward and outward, upward and downward.

At the same time, he has to avoid doing too much so that he doesn't risk exhaustion, or doing too little and loses sight of all the essential resources or allows chaos to ensue. Too much or too little? Either way could result in failure, for him and the troop.

While a successful alpha male cannot allow the troop to be uncontrollably overrun by non-troop members, with the colobus, female immigration is critical to maintain the overall welfare of the troop, both in the present and in the future.  A troop needs gene flow in order to keep it hale, hearty and healthy. Immigration sometimes also creates a cultural flow of innovative behaviours so that novel food sources and new travel routes and feeding and sleeping areas introduced by female immigrants could possibly enhance nutritional and environmental opportunities. In order for immigration benefits to occur, an alpha male needs to show that he, the troop and their territory, appear attractive to immigrants.

Contrary to common parlance, an alpha male is not necessarily the biggest or strongest or nastiest and a bully-boy alpha male is not particularly popular. In fact, a popular alpha male does not engage in bullying. If anything, he seems to almost favor the underdog.

While colobus bully-boys push their troop mates around, human bully-boy leaders are similar: they may violate the rights of minorities, rabble-rouse, ridicule, gaslight, or stridently support fake information – particularly information that is of personal, political or financial benefit to them. They may, like the incompetent colobus leaders, shut the door to much-needed immigration. These human attitudes and actions appear to be massively hyped up extensions of what I think of as Yunkishness, sometimes made worse by the potential of the human mind and our use of language.

The human bully-boy appears to be habitually cruel. He seems to actually enjoy receiving false fawning from, and humiliating, his subordinates. He relishes and is often an expert in the act of finger-pointing and scapegoating. He doesn't care about serving the public good or working for the betterment of the society to which he belongs — he only cares about himself. If an institution or an individual does not agree with him, it is to be disbanded or dismissed as a "witch hunt" against him. With no vision of a shared identity or future, he exists in a world of me, me, me, I, I, I, not we or our or us. A group, a political party or a country ruled by a bully-boy, is going to be governed badly, and its non-compliant/non-ruling members will suffer – more so during a crisis.

Fortunately for the colobus, a change in alpha male — such as the ousting or disappearance of a bully like Yunk — can bring about fairly immediate reversals of fortune.

Unfortunately for us, it doesn't quite work that way. Human primate society takes a much longer time to recover from the havoc and toxic environment created by an incompetent, ruthless bully.

Maybe one simple message to be taken from decades of research studying our fellow primates is this: While our species perceives the world through our own uniquely tuned assortment of senses, with our own uniquely chartered evolutionary history in our own unique environment, our behaviour — from cooperation and collaboration to selfishness and deception, be it political, social or psychological — is built on an evolutionary scaffold linking us to our primate past.

Which is all to say: Perhaps we ought to be more vigilant to the dangers of allowing bullies to attain and then maintain positions of authority.  Indeed, history — past and present — is fraught with bullies commandeering control, or being elected by the public. Consequently, we need to keep our ears and eyes always focused on the aspirants to and the leaders of the world, in commerce or politics. For whenever someone exhibiting Yunk-ishness gains power we have a lot to lose.

Obviously our primate evolutionary history does not explain all the modern-day hows and whys of human alpha males and bullies and human bully-boy supporters. Nor will watching colobus or other primates provide the definitive answer. Since we are not simply creatures of instinct or slaves to our genes or our history, we can act differently if we choose to.

Furthermore, while the colobus and the other non-human primates are far more sophisticated than most people dare to imagine, they are basically illiterate. We, on the other hand, have access to something very special; something that goes far beyond anything that non-human primates use or can be taught. We have access to sophisticated language with complex grammar and syntax systems. And, using our sophisticated language skills with veracity, fairness, empathy and dignity – be it speaking, signing or writing — allows us to "stand up to bullies. Not follow them," to paraphrase Barack Obama.