It "would not be an exaggeration" to say that Trump "delights in putting people in danger," Dr. Bandy X. Lee says 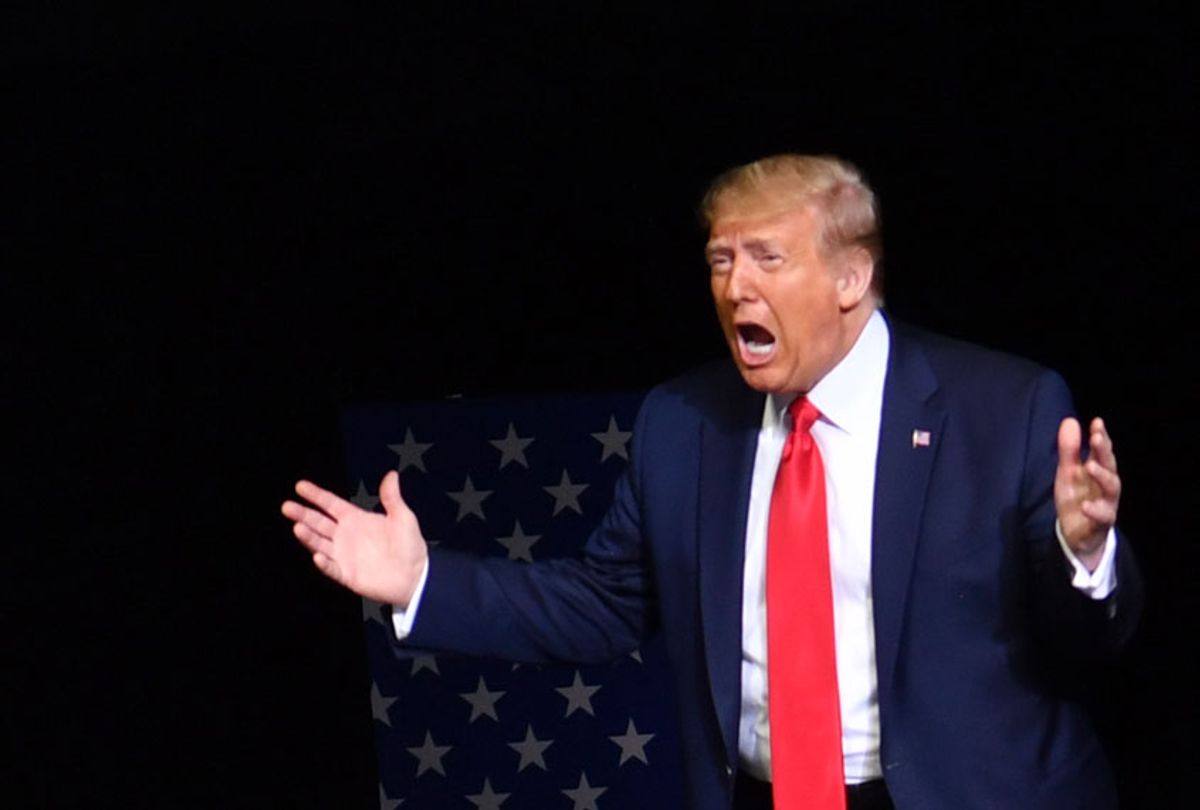 President Donald Trump's maskless return to the White House on Monday following a weekend at Walter Reed Medical Center shows that he wants his supporters to "prove their loyalty to him with their lives," psychiatrist Bandy X. Lee said in an interview with Salon.

Trump, who is still infected with the novel coronavirus, took off his mask on the Truman balcony and saluted Marine One before entering the White House and possibly exposing a photographer and others around him. Trump suggested in a video that he may now be "immune" from the virus, even as his doctor warned that the president was "not be entirely out of the woods yet."

"One thing that's for certain: Don't let it dominate you," Trump said of the virus. "Don't be afraid of it."

Lee told Salon after the viral photo-op that it "would not be an exaggeration" to say that Trump "delights in putting people in danger."

"Sociopathy is dangerous, in part because out of envy of other human beings for having human characteristics, it actively desires people to suffer and die," she said.

Lee, a psychiatrist who has taught at Yale and authored the textbook "Violence", has worked on public health approaches to violence prevention for decades. She also edited the book "The Dangerous Case of Donald Trump: 37 Psychiatrists and Mental Health Experts Assess a President" and serves as president of the World Mental Health Coalition, which plans to release a video statement by "100 mental health experts" arguing that Trump should be removed from office and the 2020 ballot, because he is dangerous and unfit. Lee also plans to publish a "Profile of the Nation" on her website, which aims to provide a "full psychological profile of Donald Trump in the context of his followers and the nation."

Trump's behavior is not unlike the thousands of people Lee has treated in her career, she told Salon.

"Mental health professionals look at patterns, as human behavior is not random. This is why society charges us with preventing dangers to self and others before they happen, unlike law enforcement, which must wait until after things happen," she said. "We are far more familiar with these situations, too. In my 20-year career of working with prisoners and violent offenders to help contain their behavior or to prevent their becoming violent in the first place, I probably treated a thousand individuals with [Trump's] exact characteristics. So far, he has not deviated even the slightest from how I expected he would behave in a position of greater power than he can handle."

Lee spoke to Salon about Trump's maskless antics, the president's many enablers and how his followers may respond to the events of the past week:

Salon: What was your reaction to Trump's returning to the White House maskless and putting staffers in danger after receiving numerous treatments with varying side effects?

Lee: Sociopathy is dangerous, in part because out of envy of other human beings for having human characteristics, it actively desires people to suffer and die. I believe it is not an exaggeration to say that Donald Trump delights in putting people in danger for multiple reasons. When he forces his followers into crowded indoor rallies without masks, for example, he is demanding they prove their loyalty to him with their lives. This is why I once compared his commands to those made to gang members and child soldiers — the circumstances are different, but the psychology is the same.

Were you surprised by how Trump's medical doctors dodged and obfuscated, as well as made false claims about the president's health amid his hospitalization?

Not at all, and I am still not ruling out malingering, or feigning illness. When deciphering these things, we look for medical inconsistencies, secondary gain and psychological disposition. There are already too many inconsistencies in the medical picture, and look at the enormous secondary gain. We know that he needed something to reset his campaign, with everything going badly for him and his debate performance being unable to reverse the polls — and he was instantly able to stifle most criticism. We also know that he would manipulate any situation, and that we are vulnerable.

I had doubts about Dr. Sean Conley ever since he announced in February 2019 that the president was in "very good health" after an examination by "11 different board-certified specialists." Why would you need so many specialists for a simple annual exam, and what about the obvious need for a psychiatrist? There is no health without mental health. Hence, when he came out of Walter Reed with an army of physicians, it appeared to me as overcompensation for a lack elsewhere.

The question of greatest relevance to the public is whether or not the president is fit to serve, which White House-employed doctors who are military subordinates to the commander-in-chief are not eligible to answer. A team of independent, peer-reviewed mental health experts needs to examine him for mental fitness, which is not difficult to do. We, ourselves, were able to do it in a very rigorous and standardized way, within a few days of having the information in the special counsel's report.

Dr. Conley himself said he was adhering to HIPAA guidelines, and thus made clear he is treating the president as a private patient. But even HIPAA laws are supposed to be broken where the safety of self or others is concerned, and a doctor could be held legally liable for not placing safety first.

We already have the travesty of Dr. Ronny Jackson using a 10-minute cognitive screen, which research studies showed even full-blown Alzheimer patients score 30 out of 30 on, to declare the president mentally "fit," as he did at a press conference in early 2018. All was show, since he had no independence and no mental health training to be able to do so. The public should demand better than this level of deception.

What does it tell you about the White House that it is refusing to contact trace its Supreme Court event, even though Trump's own aides, advisers and allies are the ones who were exposed?

This is all in line with the bigger picture. Above all, the president needs to receive proper care, and from his behavior alone, he meets criteria for a locked psychiatric facility. Past violence often leads to future violence, and we now have a person who has committed mass killings, recklessly endangering life, if not engaging in negligent homicide. [Editor's note: Lee was referring to Trump's negligence related to the coronavirus, which has killed more than 200,000 people in the U.S.].

Rhetoric and demonstrations of behavior coming out of a powerful figure, furthermore, translate into widespread imitation and deadly results for the population. Dangerousness assessments do not require a personal examination, and all physicians and mental health professionals are supposed to err on the side of safety. There is no "OLC memo" or exemption in mental health law for a president, even if that is how the American Psychiatric Association tried to misapply "the Goldwater rule." We are bound by our professional responsibility to society by the Geneva Declaration and the core tenets of medical ethics, which are part of the law.

How do you see this playing out in the near future? Trump is already claiming he beat the virus and might be "immune."

It fits with his entire plan to show that the virus is no big deal, and we can ignore it — basically to have us adopt his fantasy world view. In real life, this will make the pandemic grow even more uncontrollable and kill many more people, but this is the side effect of his inability to fight the virus and his need to fight reality instead. This is how pathology is different from rational thinking — and how it combines with a criminal mind to make it even more destructive.

A pathological drive may seem expedient in the political realm, but I have compared it to a car without brakes. Such a car may be able to get ahead in ways in which no other fully functioning car can, and perhaps even more so with an evil driver in it. But at the bottom of the hill, it always crashes. This is why it is important to stop the malfunctioning car as early as possible, through whatever means, even now. We do not have to crash.

Do you think watching the president impacted by the virus he spent months trying to downplay will change his supporters' views of him — or the virus itself?

Yes, but not in any productive way. His emerging from it so quickly — never mind that he gets daily tests and the best possible, proactive treatment — spectacularly solidifies the view that the severe public health measures, which he himself made necessary, were overblown. For those who experienced great loss form the virus, he will appear superhuman.

What people need to understand about many of his followers is that in their need for a parental figure who will take care of them, his position alone justifies whatever he does, and any exposure of his fraudulence and criminality will be experienced as an existential threat to them, which is why it only activates defensive denial, disavowal and protection of their "protector."

Violence, paranoia and delusions are also particularly contagious, and so having someone with these symptoms in an influential position is almost a setup for propagation of these traits — what I have been calling "shared psychosis" but which others have also called "folie à millions," or madness by the millions. This contagion of symptoms dissipates when exposure to the primary person is reduced. We already saw this happen when he was temporarily unable to hold rallies at the onset of the pandemic.

This is one of the psychological reasons why Donald Trump cannot leave the presidency — quite apart from the possibility of prosecution. It is also why we have said that his removal from the presidency and candidacy is of critical importance, as we have outlined since last March in our "Prescription for Survival." Even if this were not achievable, taking steps in that direction will greatly diminish his psychological influence. One of the purposes of my writing a "Profile of the Nation" was to nudge our country out of its compartmentalized, either-or thinking, which is preventing us from seeing the full picture and from coordinating to remove this unfit presidency and candidacy.