Trump is back home and tweeting like a lunatic — maybe he's fine! But this has been a massive political train wreck 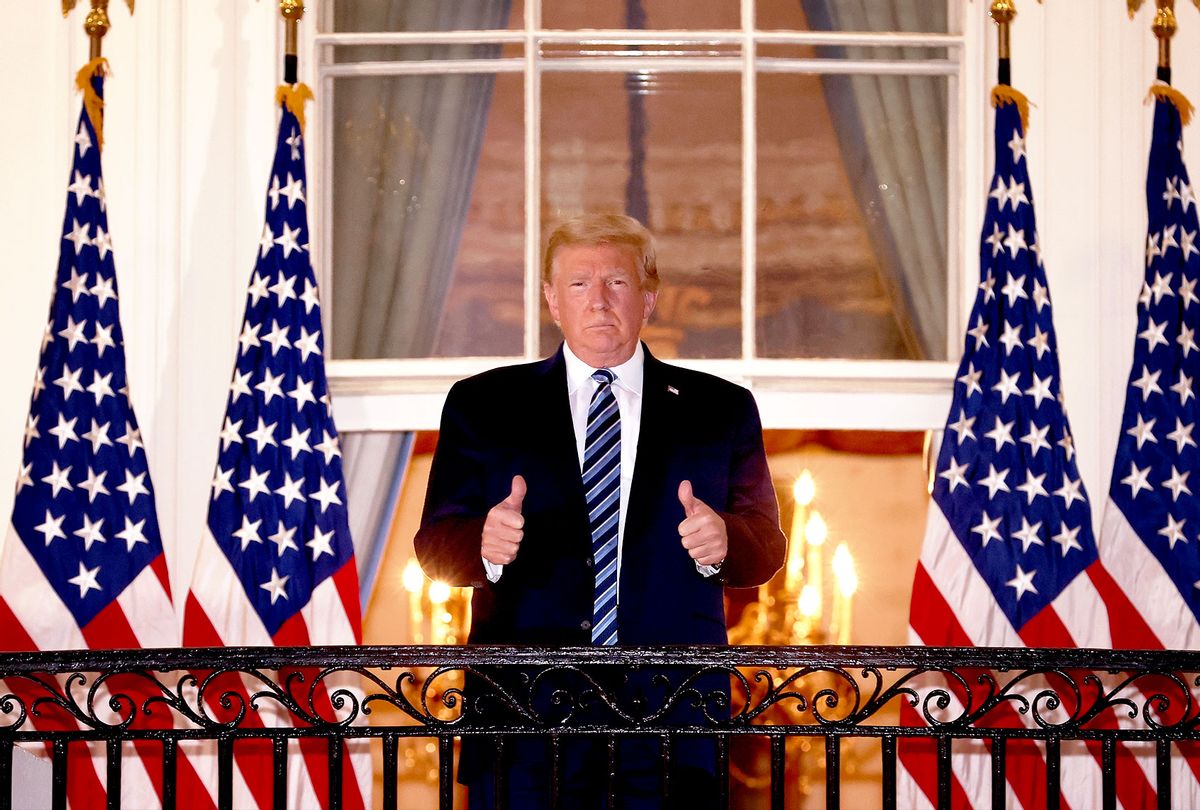 President Trump spent Tuesday night tweeting madly for hours about Hillary Clinton and Barack Obama and various conspiracy theories about the 2016 election. Twitterati speculated that his experimental drug cocktail and steroid treatment for COVID-19 might be making him manic and grandiose. But how could you tell, really? This is pretty much his normal modus operandi. The only reason one might suspect that his drug treatment was contributing to the burst of energy and wild commentary is that he is a 74-year-old man with co-morbidities who has been seriously ill with a disease that has killed more than 210,000 Americans. Since he didn't even make one of his "proof of life" videos on Tuesday, it's possible someone else was tweeting for him. But in the end the best guess is that Trump was lying in bed with Fox News on as usual, scrolling through his Twitter feed and incoherently venting his spleen — just as he might do on any other Tuesday night.

Sick or high or just having a normal one, it is perfectly understandable that Trump would be melting down in spectacular fashion. His only concern for the last four years has been getting re-elected for four more years, and that's not going well at all at the moment. This tumultuous last couple of weeks brought him only one piece of good news: the death of a beloved liberal icon, Justice Ruth Bader Ginsburg. The insensitive glee with which Trump and his GOP accomplices greeted that event, and their shameless hypocrisy in insisting on filling the seat just weeks before the election, was a true high point for the Republicans this year. I hope they enjoyed their moment, because everything that's happened to them since then has amounted to an epic train wreck.

While Republicans were still swilling champagne, the New York Times reported out a major exposé based upon Trump's long-hidden tax returns. It turns out he didn't bother to pay federal income taxes in most recent years — apparently that's for the little people. In normal times that would have been a huge scandal, but Trump managed to distract everyone away from that by acting like a deranged barbarian in the first presidential debate with Joe Biden, quickly followed by the news that the White House had become a major COVID cluster, with dozens of people diagnosed with the virus, including the president, the first lady, at least three senators and several of Trump's top aides and campaign officials.

After all that, I think we've all been wondering how the American people would react. From the looks of the polling so far, they're not pleased. In fact, the vast majority seems to believe that Trump and his administration were asking for trouble and they got it.

According to a CNN/SSRS poll released on Monday, 63% said Trump acted irresponsibly in handling the risk of getting the virus and giving it to others. Only 33% said he had done the right thing, which means even some of his own voters aren't impressed with his actions. And 69% said they couldn't trust what the White House was saying about Trump's health. Considering the Soviet-style propaganda campaign they've been running at 1600 Pennsylvania Avenue, that's no surprise.

Election polling is no better for Trump. An NBC/Wall Street Journal poll has Biden up by 14 points nationally, as does a new FPU/Herald poll. CNN/SSRS has Biden up by 16 points. Nate Silver at 538 says getting COVID has hurt him in more ways than one:

The White House is apparently in total chaos, which isn't really news, but there does seem to be a certain desperation that isn't always present. This is likely because of Trump's atrocious messaging to the public over the past few days, in which he's pretending he has "beaten" the virus with his strength and virility, and telling people to stop letting the virus "dominate" their lives. But there are those who willingly ride along and amplify his message:

The lack of empathy in that comment even makes a Fox News host do a double take. But the attitude reflected there absolutely reflects the ongoing thinking of the Trump administration and Republican officials, even with a major outbreak amid their own ranks. They clearly don't care that most people can't get the kind of medical treatment they have available, much less the full-spectrum VIP care the president receives. Those who die, as Trump would say, are obviously losers. They let that virus dominate them.

So too, apparently, are the millions of people still on unemployment, facing eviction, losing health insurance and unable to feed their families. The long delayed second stimulus seemed to be gathering some steam in the last week or so with Treasury Secretary Steve Mnuchin deep in negotiations with Speaker Nancy Pelosi, with a couple of major sticking points (help for state and local governments and a $400 weekly stipend on top of unemployment insurance) yet to be hashed out. It was unclear whether they could finally come to terms but any hope for that was dashed when Trump awakened from one of his COVID fevers and tweeted that he was pulling out of all talks for a stimulus and would only resume them if he wins the election. He instructed McConnell to put all of his focus on getting Amy Coney Barrett confirmed to the Supreme Court.

Considering that recent polling suggests that 74% of voters want the government to prioritize COVID relief over confirming Barrett, it was bizarre for Trump to take the blame for the collapse of the talks. But perhaps the sickly president was being manipulated:

It sounds to me as if McConnell has given up and just wants to make sure he gets his justice on the court before the whole house of cards collapses.

Someone must have wised the president up to the fact that he had made a massive blunder, because by late Tuesday night he had reversed field and was issuing edicts about stand-alone bills to rescue the airline industry and send $1,200 checks out immediately. Apparently it dawned on him that trying to blackmail people into voting for him might not be the smart move. Maybe someone was able to explain to him that getting money to people before the election could actually be helpful. But who knows?

The fact is that that we have a president in the grips of a serious virus which is known to have serious neurological effects on many people who contract it. He's also on some strong drugs that can have unpredictable side effects. Even on a good day, Trump never fully understands the governing aspects of his job, nor does he care about anything except how it affects him personally. The country is in the hands of someone who is clearly unable to carry out his duties and he's making disastrous decisions that affect the lives of tens of millions of people.

In other words, it's business as usual in Washington.