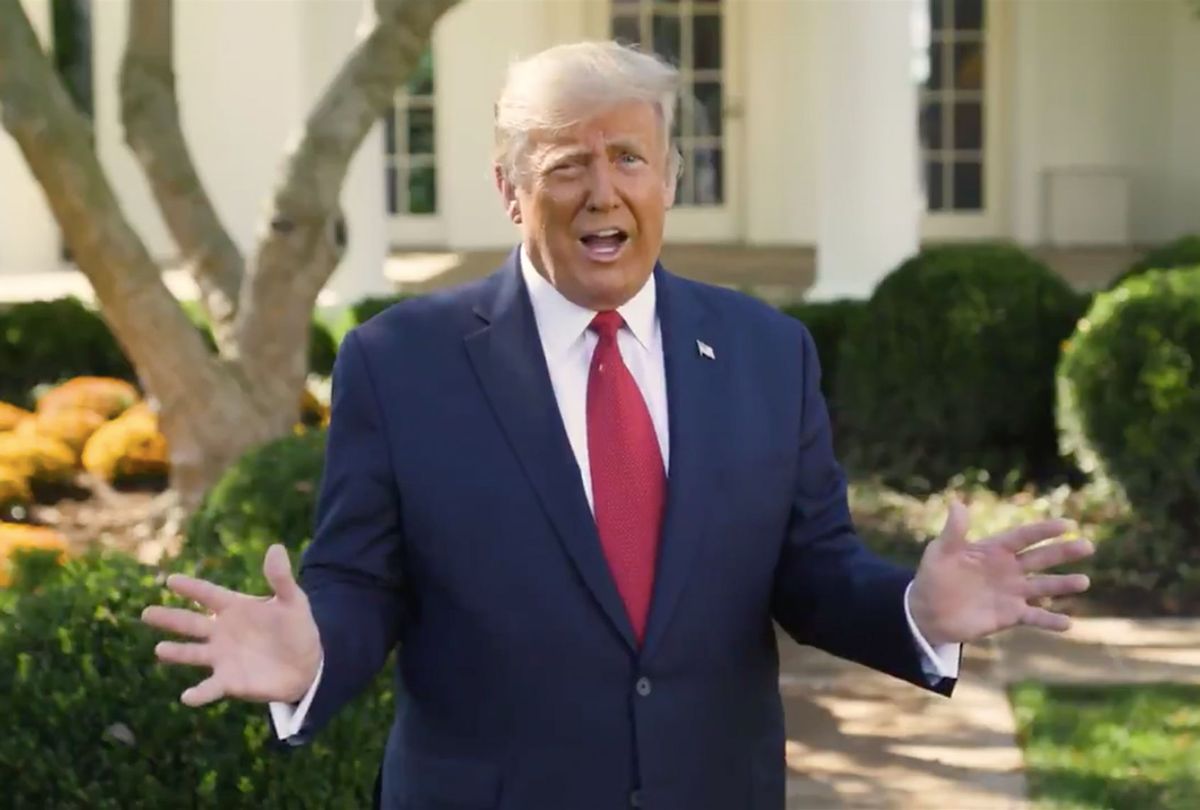 After President Donald Trump appeared in a Wednesday video claiming, without evidence, that he had discovered a "cure" for the coronavirus in the form of an antibody cocktail produced by a company run by one of his golf club members, its stock soared.

Trump filmed the five-minute video after he was treated for symptoms of COVID-19 at Walter Reed Medical Center with a mix of Remdesivir, steroids and the antibody cocktail produced by the firm Regeneron.

Despite receiving multiple different treatments, Trump claimed that the cocktail, which he repeatedly and incorrectly called "Regeneron," made him feel "good immediately."

"I call that a cure," Trump said, while complaining that the Food and Drug Administration's new guidelines would delay the authorization for a coronavirus vaccine until after the election.

Trump claimed that he had an "emergency use authorization all set" for the drug that he wanted "signed now," even though The New York Times reported that Regeneron did not submit an application for an emergency approval until hours after the president's video had been published.

Trump claimed in his video that "hundreds of thousands" of doses would be available in hospitals for free. But Regeneron said it only had enough doses for 50,000 patients in its application, according to The Times.

It is unclear how Trump would pay for the drug, which is expected to cost "thousands of dollars." The company said it would release its initial supply under an emergency use authorization free of charge, The Times reported.

Clinical trials remain ongoing, and Regeneron has yet to release any detailed data to back up its claim that the cocktail lowers virus levels. But it has already received more than $500 million from the federal government to develop the treatment.

The company said it would be able to produce doses for up to 300,000 patients "in the next few months" and could produce about 250,000 doses a month come next year, according to The Times.

Despite Trump's dubious claims about the treatment, the video sent Regeneron stock rising by 4.7% in premarket trading on Thursday after it had already jumped nearly 10% following reports that Trump had been given its cocktail. Regeneron's share value has increased by more than 50% this year.

Trump's endorsement, which many critics have called an "infomercial," raised ethical concerns. Trump previously owned stock in Regeneron, and he is friendly with billionaire CEO Leonard Schleifer, a member of Trump's golf club in Westchester, N.Y., who the president calls "Lenny," according to CNN.

"Len and President Trump are acquaintances from both living in the Westchester area for many years but didn't have any regular contact until this year, when they've discussed matters around COVID on occasion," Regeneron said in a statement to CNN.

Schleifer met with Trump in May to discuss the treatments being developed by his company.

Trump was given a single dose of Regeneron under a compassionate use clause. A spokeswoman for the company said fewer than 10 of these had been granted, according to the Associated Press. The company also contacted Democratic presidential nominee Joe Biden "to make them aware of the compassionate use mechanism, should they need to apply" if he becomes infected.

"Only a small number of these requests have been approved for rare and exceptional circumstances, and that will continue to be the case," a Regeneron spokesperson told Salon's Roger Sollenberger earlier this week in an email.

"That crosses lines of appearing to promote a potentially unapproved product" in violation of FDA rules," she said.

Dr. Steven Joffe, the medical ethics chief at the Unviersity of Pennsylvania, told the AP that "it's not clear" if Trump's case was an "emergency situation."

"I think there is something wrong with the privileged — the president — getting special treatment that's not available to the rest of us," he said. "There's so much injustice in our health care system, with so many people not even having access to the basics."