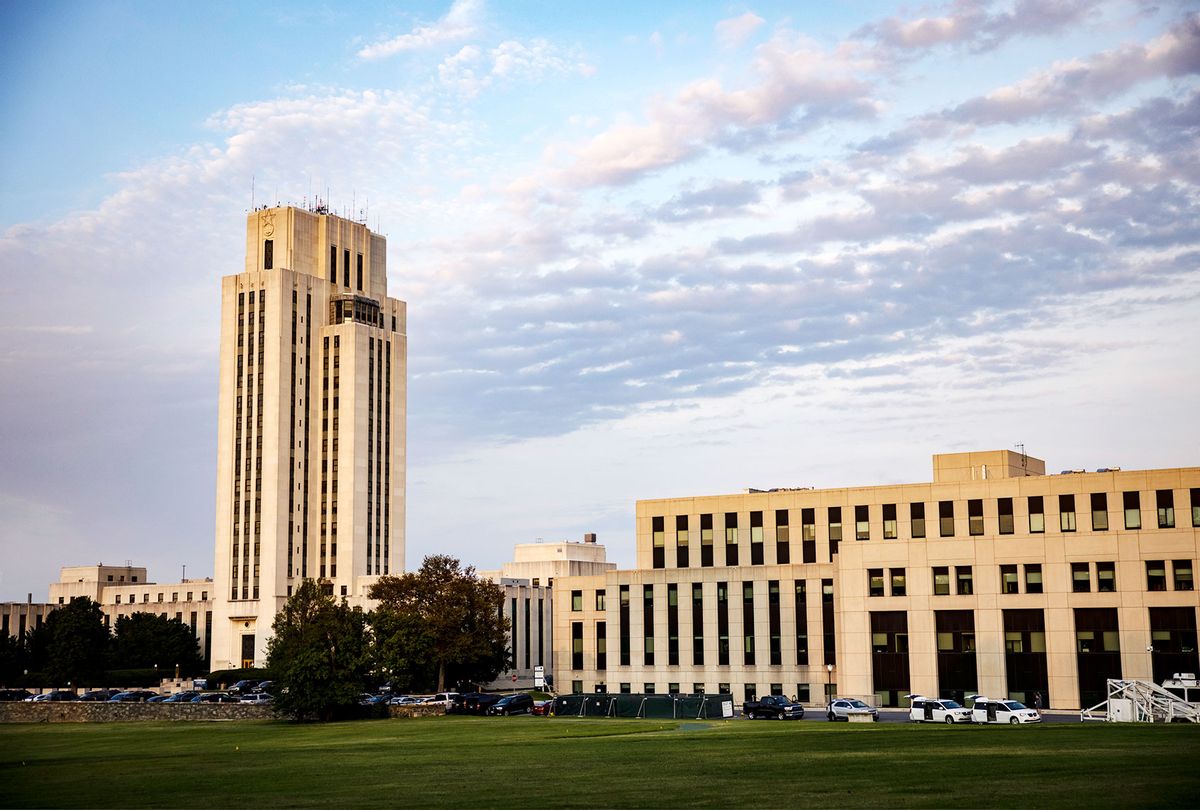 A general view of the facade of Walter Reed National Military Medical Center where President Donald Trump was admitted for treatment of COVID-19 on October 4, 2020 in Bethesda, Maryland. (Samuel Corum/Getty Images)
--

Update: On Monday evening President Donald Trump walked from the Walter Reed National Military Medical Center wearing a full facial mask, gave a thumbs up to reporters and left in his motorcade.

Despite mixed signs about whether he is actually healthy, President Donald Trump announced Monday that he would be leaving Walter Reed National Military Medical Center, where he had been treated since last week for COVID-19.

"I will be leaving the great Walter Reed Medical Center today at 6:30 P.M. Feeling really good!" Trump announced on Twitter. "Don't be afraid of Covid. Don't let it dominate your life. We have developed, under the Trump Administration, some really great drugs & knowledge. I feel better than I did 20 years ago!"

His tweet came shortly after he criticized the media in a separate post, tweeting minutes earlier that "the Media is upset because I got into a secure vehicle to say thank you to the many fans and supporters who were standing outside of the hospital for many hours, and even days, to pay their respect to their President. If I didn't do it, Media would say RUDE!!!"

Trump was referencing an event that took place on Sunday, when Trump left the hospital in his motorcade in order to briefly wave to onlookers before returning to Walter Reed. That incident prompted scrutiny over the risks posed to the Secret Service agents who shared space with the coronavirus-infected Trump in the nearly-airtight, chemical weapon–proof vehicle that he drove in.

Although Trump insists that he is feeling fine, that analysis is contradicted by other reports, and is also contradicted by the normal timeline of coronavirus infection. Coronavirus patients are vulnerable for seven to ten days after their first symptoms, and those with severe symptoms — as Trump seems to have had, based on some of his own doctors' reports — are often hospitalized for that length. If one believes the administration's stated timeline of symptom appearance, that would suggest Trump should stay under observation in the hospital until at least October 8.

At one point the president reportedly took the steroid dexamethasone to combat his low blood oxygen levels, a common side effect of moderate to severe COVID-19 infection. Dexamethasone is generally used to stop a patient's immune system from fatally overreacting to a disease. Dr. Monica Gandhi, an infectious disease doctor and professor of medicine at the University of California–San Francisco, told Salon by email on Monday that "dexamethasone is only approved for patients with very severe disease mechanically ventilated in the hospital." She noted the oddity of having him take this drug despite his doctors' statements that his case was not severe. "This drug can cause harm in more mild disease," she added.

Gandhi is not alone in noting these contradictions. Dr. Robert Wachter, chairman of the University of California at San Francisco's department of medicine, told The Washington Post on Monday that "for someone sick enough to have required remdesivir and dexamethasone, I can't think of a situation in which a patient would be okay to leave on day three, even with the White House's medical capacity." Remdesivir is an antiviral drug that "may shorten hospital stays but are usually given to patients with more severe disease," Dr. Gandhi told Salon. Trump is also reported to have taken an experimental drug called REGN-COV2 from the biotechnology company Regeneron, which has not been approved for public use.

Wachter's views were echoed by William Schaffner, a professor of infectious diseases at Vanderbilt University's medical school, who told the Post that he would "absolutely not" have a patient like Trump return to work after only three days, adding that "I will bet dollars to doughnuts it's the president and his political aides who are talking about discharge, not his doctors."

Trump is at an unusually high risk of developing serious complications from COVID-19, or even dying, because of his sex, weight and advanced age. A recent compilation of COVID-19 studies compiled in the scientific journal Nature found that roughly 12% of people with Trump's demographic profile have died from the disease.

Trump's tweeted statements that people should not "be afraid" of COVID-19 led to an outcry on social media and among public health experts. More than 200,000 Americans have died so far of COVID-19, while more than 7.4 million in this country have been diagnosed with it, according to the Johns Hopkins University & Medicine Coronavirus Resource Center. Many of those who recovered have long-term side effects. Trump admitted to reporter Bob Woodward in February and March that he deliberately played down the pandemic, and the United States has performed worse both medically and economically than other developed countries which were proactive in dealing with the deadly disease.