The science is clear: Trump bungled the pandemic response

Research shows what was already anecdotally obvious: Trump's abysmal mishandling of the pandemic got us here 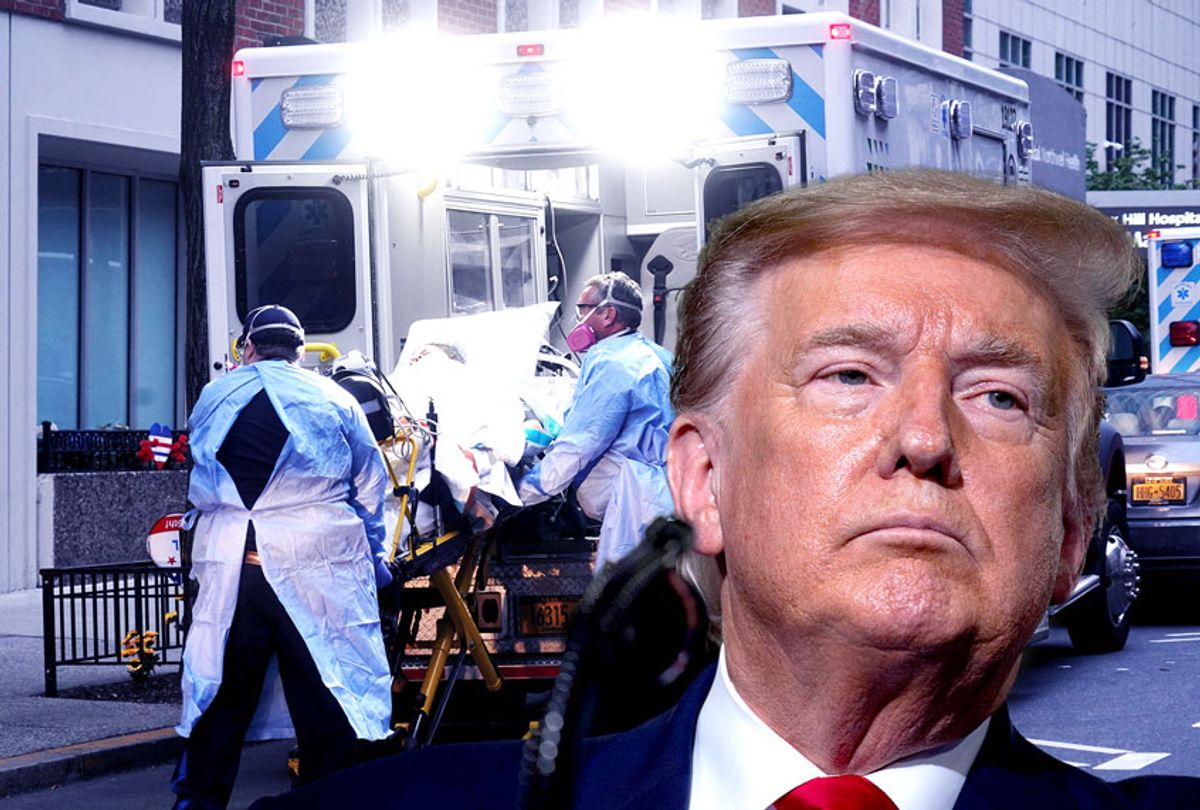 Let us pretend, for the sake of argument, that all of the other terrible things that Donald Trump has done during his presidency never happened: the persecution of immigrants and handouts to the wealthy, the destruction of our environment, his attacks on free speech rights and endless scandals. Even if one could look the other way on all of that and more, the unavoidable reality remains that Trump's mishandling of the coronavirus pandemic — completely on its own and without regard to any other policy issue — has been serious enough to justify deeming his administration to be an abject, unforgivable failure.

Trump supporters obviously don't want to admit this. If you turn on Fox News, read Breitbart and The Daily Wire or browse through the cesspools of YouTube or Reddit, you'll find plenty of people who spin or defend Trump's bungling. Yet to quote John Adams (a president far superior to Trump in every way), "Facts are stubborn things; and whatever may be our wishes, our inclinations, or the dictates of our passion, they cannot alter the state of facts and evidence."

The most recent piece of evidence is a study conducted by a research team led by the University of Arizona evolutionary biologist Michael Worobey. By analyzing existing genomic data from the coronavirus, the scientists concluded that "the virus associated with the first known transmission network in the US did not enter the country until mid-February." They call the finding "sobering," noting that "it demonstrates that the window of opportunity to block sustained transmission of the virus stretched all the way until that point."

In other words, although the first confirmed COVID-19 case in the United States was reported in Washington state on January 20, "rapid interventions successfully prevented onward transmission" in that individual's case. Patient zero in the United States most likely entered the country at some point around mid-February, meaning that if Trump had paid attention to the warning signs at that time — of which, as we soon shall see, there were many — he could have implemented measures that saved thousands of lives when the virus inevitably broke out here.

He did not do so, and as a result the number of pandemic-related deaths in this country is likely to soon match that of American fatalities during World War I.

Trump had abundant opportunities to prepare us for a pandemic before the coronavirus reached our shores. Previously, President George W. Bush had the foresight to warn us about a possible pandemic, and to try to prepare for it, back in 2005. Trump did not take any of these concerns seriously. During the first year of Trump's presidency he ordered the Department of Homeland Security to stop the pandemic modeling that it had done in conjunction with national laboratories since 2005, and proposed a 20 percent budget cut to the Centers for Disease Control and Prevention. In 2018 he proposed $900 million in budget cuts to the CDC, removed a member of his national security team who had advocated a complete biodefense plan in the event of a pandemic, and disbanded the global health national security team. By 2019 he was allowing 2,109 ventilators (equalling 21 percent of the Strategic National Stockpile's inventory) to become unusable, eliminating a U.S. Agency for International Development program that existed to warn America about possible public health threats and ignoring a warning from the Council of Economic Advisors that a pandemic could kill up to half a million Americans.

Then 2020 arrived. Trump reportedly was initially warned about the coronavirus outbreak by intelligence officers on January 3. His first substantial briefing on the coronavirus occurred 15 days later, with Secretary of Health and Human Services Alexander Azar describing Trump as distracted by a desire to crack down on vaping and characterizing concerns about the pandemic as "alarmist." After the first confirmed case was made public, Trump told a televised audience that "we have it totally under control. It's one person coming in from China, and we have it under control. It's going to be just fine." On that same day he refused to implement policy recommendations in a "pandemic playbook" developed by President Barack Obama's administration that would have protected the American workforce.

Trump proceeded to ignore multiple other attempts made over subsequent weeks by his advisers and Republican allies to get him to take the pandemic seriously. Instead he dismissed their warnings as "alarmist" and would go on to hold a number of rallies (seven) and golfing outings (three) between learning of Obama's pandemic playbook and ultimately declaring a national emergency. To make it clear that he was not concerned about the pandemic during this period, Trump's budget proposal — which was released on February 10 — called for "cutting Health and Human Services funding by $9.5 billion, including a 15 percent cut of $1.2 billion to the CDC and a $35 million decrease to the Infectious Diseases Rapid Response Reserve Fund's annual contribution." On February 14 he ignored a memo jointly written by Health and Human Services and the National Security Council that called for "significantly limiting public gatherings and cancellation of almost all sporting events, performances, and public and private meetings that cannot be convened by phone." It also called for school closures, stay-at-home orders and advocating nearly universal telework.

Less than a week later Trump allowed 14 Americans infected with the coronavirus on a cruise ship to return to the United States despite CDC warnings not to do so. When Dr. Nancy Messonnier, director of the CDC's National Center for Immunization and Respiratory Diseases, warned Americans to prepare for a possible outbreak, Trump was so angered by the subsequent stock market crash that he cancelled a planned coronavirus task force briefing. Instead he continued reassuring the public, claiming on February 26 that the cases "within a couple of days is going to be down to close to zero," insisting on March 2 that "we're talking about a much smaller range" of deaths than the flu and saying on March 6 that the pandemic was an "unforeseen problem" that "came out of nowhere." On March 10 a Trump official said the administration continued to stand by its proposed budget cuts to the CDC, while on the same day Trump himself praised the "great job" his administration was doing in handling the crisis and reassured Americans "it will go away" and "it's really working out."

Three days later, he declared a national emergency — more than 10 weeks after he was first informed of the situation.

Since that time Trump has passed on pseudoscientific claims about hydroxychloroquine, a drug he touts as a treatment (and in which he has a financial stake — he has a small personal interest in Sanofi, a French company that makes the drug's brand-name version). He has wrongly passed the buck of blame to the Obama administration by lying about their policies and his own. He has made a number of premature attempts to reopen the economy; notably, he said the country would be "raring to go by Easter", then expressed solidarity with protesters opposing their state's stay-at-home orders by tweeting that their governments should "liberate" them. Soon after, he threatened to override governors who kept houses of worship closed (which he lacks the authority to do). Trump mocked his Democratic opponent in the presidential election, former Vice President Joe Biden, for wearing a face mask while refusing to don one himself. He has suggested that people inject themselves with disinfectant (later insisting he was joking) and threatened to hold up funding as punishment to states that try to expand access to mail-in voting, which some experts believe will hurt Trump's reelection chances. He hasn't done nearly enough to manufacture tests, protect workers or make sure that contact tracing prevents further spread of the disease.

The bottom line is that Trump failed to prepare America for the pandemic for more than two months after he was made aware of it. After he finally declared a national emergency, he refused to offer more than erratic and incompetent leadership. And it is not just observation — scientists and research like the aforementioned study seem clear on this point.

"He should have been warning us it was coming," Dr. William Haseltine, a biologist, told Salon in March. "He should have been preparing by stockpiling all the necessary equipment. But even today we're not doing what we should do. Let me put it that way. What we should be doing is contact tracing [identifying people who may have come in contact with infected patients] and having mandatory quarantines for everybody who's been exposed. And quarantining not at home, but in hotel rooms, single occupancy hotel rooms."

If you don't care about the millions of people who have lost their jobs and the hundreds of thousands who have lost their lives because of Trump's incompetence, that is your right. If you decide to vote for Trump because there are things he has done as president which you support, or because you feel Biden would be much worse, that is also your right. If you think expert political scientists like Allan Lichtman are wrong when they point out that this crisis makes it more likely than not that Trump will lose in November, that is your right as well. Everyone is entitled to their opinion on whether they think Trump deserves a second term as president or will win one.

No one, however, is entitled to deny scientific evidence. And the facts and evidence make it clear that, scientifically speaking, America's pandemic crisis is Trump's fault.