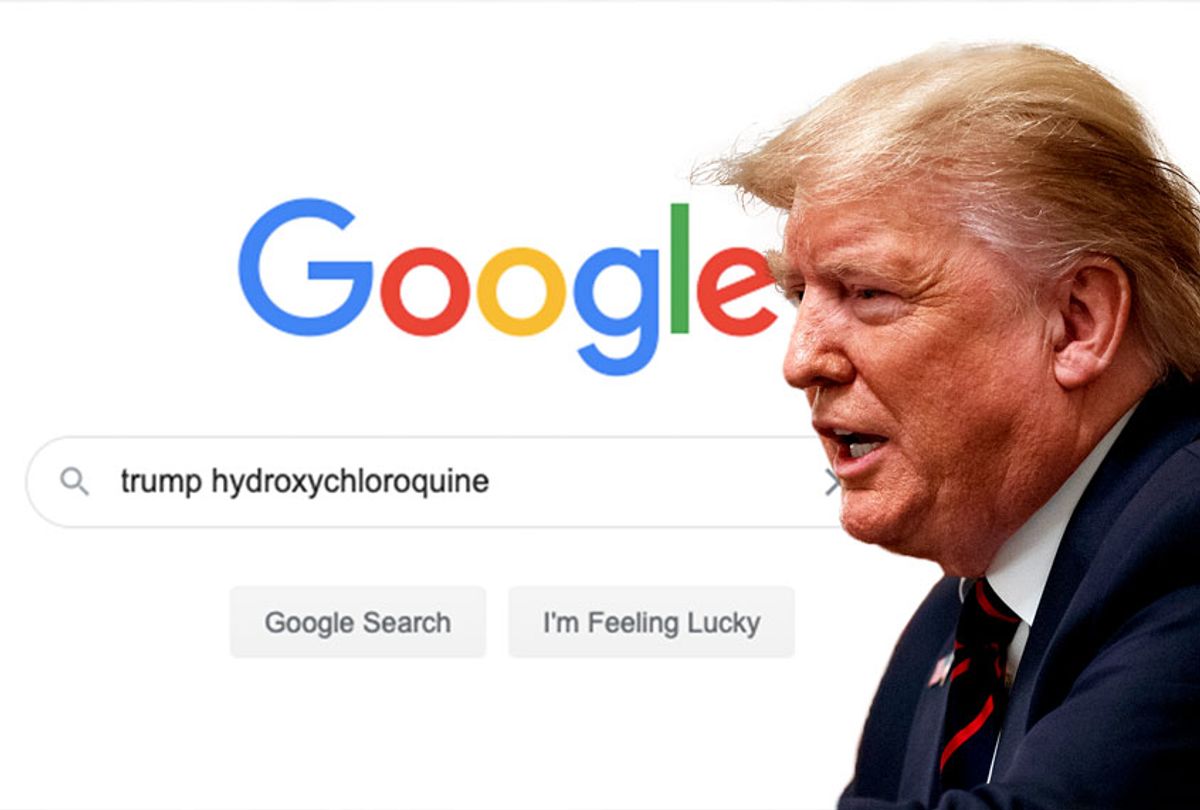 Google appears to be suppressing searches for variant phrases combining the words "Trump" and "hydroxychloroquine," perhaps out of concern over spreading harmful misinformation, after a study of 96,000 coronavirus patients found that the treatment offers no benefit and increases the risk of death.

Google searches for "trump hydroxychloroquine," "is trump taking hydroxychloroquine" and similar phrases, conducted after the new study was published, no longer appear to autocomplete on Chrome and Safari, though other search terms for the drug do, as do searches in competing engines such as Bing or Yahoo.

The study comes just days after President Trump's surprising claim last week that, after consulting with the White House physician, he had been taking daily doses of hydroxychloroquine and zinc for more than a week as a prophylactic against coronavirus infection. This was despite warnings from the Food and Drug Administration and his own health officials.

Trump, who at age 73 is the second-oldest president in U.S. history, says he is no longer taking the drug.

Those search terms, however, regularly yield between 40 million and 50 million hits and have skyrocketed over the last week on Google Trends, both key popularity factors that determine which search keywords autocomplete.

SEO experts tell Salon that it appears Google has censored the search out of misinformation concerns, a claim Google also seems to echo.

"It looks irregular," said James Khubiar, an SEO expert at the law firm Morgan & Morgan. "Usually when there are things in the news that are being searched for a lot, which is confirmed by Google Trends, they would autofill and return related queries. You're seeing the same thing when you search for things like 'plandemic' and 'Bill Gates Covid,'" a reference to two debunked right-wing coronavirus conspiracy theories.

"When terms are just not showing up like that it means they're being flagged as incendiary queries, often related to criminal and deviant terms," Khubiar added.

Instead of "trump hydroxychloroquine," a Google search autocompletes for "trump hydrocephalus," a reference to an entirely different conspiracy theory unrelated to the coronavirus pandemic.

Mark Traphagen, vice president of product marketing and training at seoClarity, told Salon in an email, "The short answer is, yes, Google is definitely suppressing 'Trump hydroxychloroquine' in autocomplete. I can say that with confidence because they have been doing that for a while, and it's been noticed by many people who watch search."

That pattern seems to recur "for any search with a person's name that also has something negative associated with it," Traphagen said. "Nearly all the news right now about Trump in association with that drug is negative, so I'm not surprised they've suppressed it in autocomplete."

The autocomplete policies page says predictive search won't display terms that are "violent or gory," "sexually explicit, vulgar, or profane," "hateful against groups," "sensitive and disparaging terms associated with named individuals" and, lastly, "dangerous," which Google explains this way: "We don't allow predictions associated with the promotion of goods, services, or information that facilitate or cause serious and immediate harm to people or animals."

When the words "hydroxychloroquine" and "Trump" are reversed, however, autocomplete offers options that direct to the president's odd economic request to Indian Prime Minister Narendra Modi.

In March, an Arizona man died and his wife was hospitalized after drinking an aquarium cleaning product containing a related chemical called chloroquine phosphate, a decision which his wife later blamed on Trump's endorsement.

A Google spokesperson told Salon in an email that autocomplete is algorithmically generated based on each user's search activity, and also reflects worldwide search rankings.

"We have algorithmic protections designed to prevent policy-violating predictions from appearing," the spokesperson said. "In some cases, the systems can be overly conservative in the predictions shown to ensure that we are not sharing dangerous content or providing predictions that people have not asked for."

A study of 96,000 coronavirus patients from 671 hospitals on six continents found that those who received hydroxychloroquine, which Trump pushed for months as a "miracle" cure, saw no benefit from the treatment and had a significantly higher risk of death compared than patients who did not.

The main outcomes of interest, the study reported, were decreased hospital survival and irregular heartbeats that can cause sudden death.

"This is the most important and largest study yet for hydroxychloroquine and it provides unequivocal evidence for harm, not just lack of effect, and more than a doubling of malignant heart rhythm (life threatening) disturbances," Eric Topol, a cardiologist and director of the Scripps Research Translational Institute, told Salon.

David Maron, director of preventive cardiology at the Stanford University School of Medicine, told the Washington Post that "these findings provide absolutely no reason for optimism that these drugs might be useful in the prevention or treatment of COVID-19."

A statement on Monday evening from White House physician Dr. Sean Conley confirmed Trump's claim, saying that after "numerous discussions" the two of them had eventually concluded that "the potential benefit from [hydroxychloroquine] treatment outweighed the relative risks."

Multiple previous studies have suggested the drug may be dangerous, but this latest study, published Friday in the medical journal the Lancet, was by far the largest to date. Although the survey was an analysis of medical records rather than the gold standard of a randomized trial, in which researchers split patients into groups before treatment, the sheer scope is compelling.

Researchers reviewed records of nearly 100,000 patients hospitalized between Dec. 20 and April 14 with positive lab test results for SARS-CoV-2. After controlling for multiple factors — including race, sex, age, smoking and underlying health conditions such as heart or lung problems — they found that COVID patients who took the drug demonstrated a 34% increase in risk of mortality and a 137% increased risk of serious heart arrhythmia.

Researchers also reviewed patients who received the related drug chloroquine, as well as those treated with a combination of one of those drugs and an antibiotic such as azithromycin or clarithromycin. A fifth group received none of those treatments.

Though Trump and his Fox News supporters have wavered before in the face of scientific setbacks, they keep returning to the promotion of hydroxychloroquine as a potential cure, leaning for months on retrospective studies by a controversial French doctor to suggest that there's a worldwide media and medical conspiracy against the president.

The White House did not respond to Salon's request for comment.