Hydroxychloroquine truther Laura Ingraham, who is not a doctor, begs Trump to overturn FDA's warning 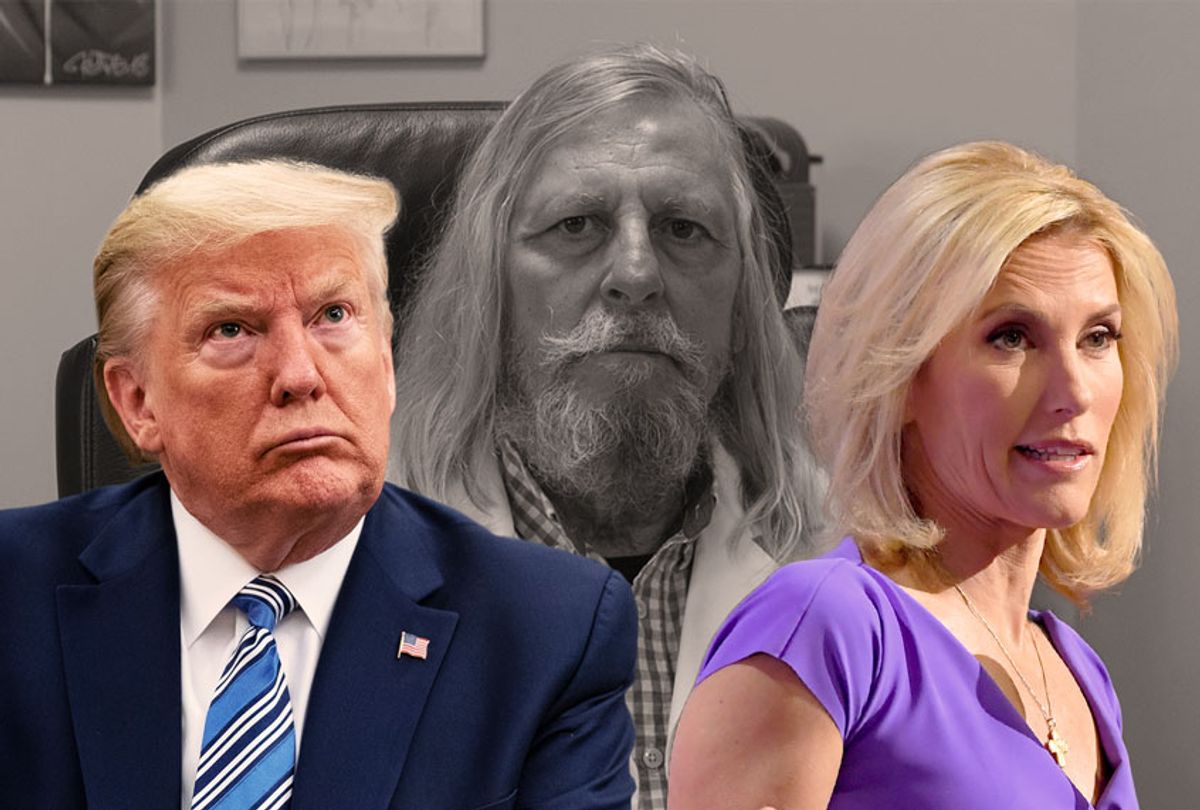 Fox News host Laura Ingraham, who has publicly acknowledged her lack of medical expertise, made a personal appeal to President Donald Trump on her broadcast to "pull back" a "misguided" FDA warning about an unproven drug treatment for the new coronavirus.

"We now have multiple studies across the globe and reports from treating physicians regarding the safety and efficacy of hydroxychloroquine," Ingraham during a Wednesday segment. "Along with hundreds of thousands of lupus and rheumatoid arthritis patients who've been taking the drug for decades without complications. Time for the FDA — the president himself — to pull back on the misguided and unnecessary warning that was issued a few weeks ago."

Both the Centers for Disease Control and Prevention and the National Institute of Health have also issued warnings about the unproven treatment.

Ingraham floated the idea in the context of a recent study from French microbiologist Dr. Didiet Raoult, the only medical expert whom she regularly invokes on the topic. The Fox News host's comments came hours before the largest study published to date, in the New England Journal of Medicine, found that the drug failed to help coronavirus patients.

"We don't think at this point, given the totality of evidence, that it is reasonable to routinely give this drug to patients," Dr. Neil Schluger, chief of the division of pulmonary, allergy and critical care medicine at Columbia, which led the research, said. "We don't see the rationale for doing that."

Government officials have also repeatedly cautioned the public against the unproven treatment, citing "potentially significant side effects," including death.

On April 1, Ingraham featured testimony of another expert — Dr. Stephen Smith, founder of the Smith Center for Infectious Diseases and Urban Health — who claimed that the recent science around hydroxychloroquine heralded "the beginning of the end of the pandemic."

More than 70,000 Americans have died of COVID-19 since that interview, according to the most recent data from Johns Hopkins University.

Fox News personalities including Sean Hannity and their guests like Dr. Mehmet Oz advocated strongly for the drug, which was reportedly first brought to Trump's attention by primetime host Tucker Carlson. Network stars have largely eased off after the NIH issued a public warning in April, but Ingraham has recently ramped back up her outspoken opinions about the drug. She is a political commentator — not a doctor.

"They might do emergency authorization," she told viewers late last month. "Hydroxychloroquine was approved decades ago."

Her campaign, however, hinges largely on Raoult's work, which has been roundly criticized, including from the very journal that published his first study.

The study Ingraham cited Thursday, published in late April, retrospectively analyzed 1,061 patients treated with a combination hydroxychloroquine and azithromycin, and claimed to find a "good clinical outcome and virological cure in 91.7 percent of patients" with only eight deaths and a "handful" of side effects.

Unlike experiments — which typically involve comparisons between experimental groups and a control group — retrospective studies cast for trends within existing data. However, Raoult reclassified the study as "retrospective" between pre-print and publication stages, an apparent end-around for what would otherwise violate ethical codes, such as failing to provide consent forms and testing on patients as young as 14 years old.

Ingraham hailed this research over muted footage of the doctor, which seems pulled from an interview where Raoult, who is white but claims to have been born in Senegal, cites what he claims is his African heritage for his success in treating COVID-19 patients.

"Maybe I was capable of responding to this situation, because I'm part African and part of my ancestry leave me with the idea that we should treat infectious diseases," he said.

"We have to be careful, Laura, that we don't assume something works based on an anecdotal report that's not controlled," he said. "And I refer specifically to hydroxychloroquine. There's a lot of buzz out there on the Internet — on the social media — about that. We need to look at it in a scientific way."