After touting a drug studies have found to be ineffective and possibly dangerous, Ingraham dismisses remdesivir 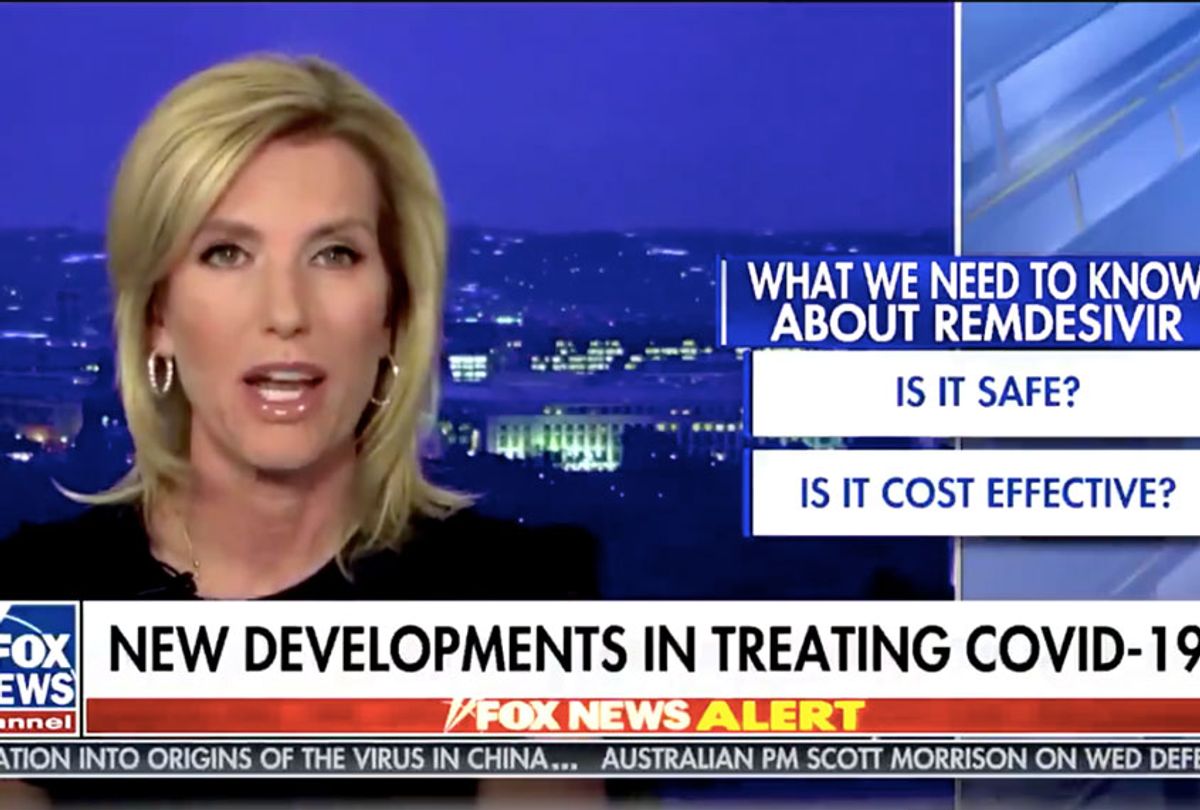 Fox News host Laura Ingraham dismissed a study that found promising results in coronavirus patients treated with the Ebola drug remdesivir and once again touted the unproven malaria drug hydroxychloroquine as a potential treatment despite criticism.

Ingraham, who was among the first Fox hosts to promote hydroxychloroquine for coronavirus patients despite questions about its efficacy and even met with President Donald Trump at the White House to discuss the drug, raised questions about remdesivir after Dr. Anthony Fauci, the top infectious disease expert in the country, touted the early results.

Ingraham, who does not have a medical degree, said the drug "certainly sounds encouraging." But she questioned whether it was safe and why Fauci was not as optimistic about the unproven drug treatment she has repeatedly hyped on her opinion program.

The Fox News host did not seem to share the same concern when she promoted hydroxychloroquine, which doctors have warned has significant side effects and could even lead to death when combined with the antibiotic azithromycin.

"The hydroxychloroquine and the Z-pack, I think, as a combination, probably, it's looking very, very good," Trump said March 23 during a White House briefing.

"We don't know," Ingraham mused Wednesday night. "It hasn't been approved by the FDA. They might do emergency authorization. Hydroxychloroquine was approved decades ago."

Though hydroxychloroquine was approved as an anti-malarial medication and is also used to treat patients with lupus and rheumatoid arthritis, a large study in New York suggested that it had no benefit for coronavirus patients after a retrospective study found that veterans treated with the drug had a higher rate of death than those who only received routine care. The Food and Drug Administration warned against the widespread use of hydroxychloroquine last week, citing potential side effects. Though Trump has frequently touted the drug, he has largely stopped mentioning it.

Ingraham argued that remdesivir was expensive and difficult to mass-produce while claiming that hydroxychloroquine was "cheap and already widely available." She did not mention that the hype around the drug has led to lupus and arthritis patients facing shortages.

The Fox News host then brought on regular guest Dr. Ramin Oskui, who cited a French researcher whose early study of the drug had been discredited. Oskui claimed that while hydroxychloroquine had a "very favorable safety profile," he was concerned that remdesivir might not be as safe because of "its history with Ebola."

A clinical trial sponsored by the National Institute of Allergy and Infectious Diseases that included 1,063 patients found that the drug may help reduce recovery time in patients infected with the coronavirus. The average recovery time was 11 days for patients who were given the drug, compared to 15 days among patients who got a placebo.

"The data shows that remdesivir has a clear-cut, significant positive effect in diminishing the time to recover," Fauci told reporters Wednesday, adding that the early results were significant because "what it has proven is that a drug can block this virus."

Trump, who was joined by Fauci in the Oval Office, agreed that the early results were "very positive." The Food and Drug Administration is expected to announce an emergency approval for the drug, a senior administration official told The New York Times.

"Remdesivir is not a magic bullet, but it's as good as we get right now," Dr. Peter Chin-Hong, an infectious disease expert at the University of California, San Francisco who participated in the trial, told the outlet. "Patients come to the hospital thinking we have a treatment, and by treatment, they mean a drug. We have been impotent in not having any options."

But remdesivir is not a 100% "knockout," Fauci warned, and other studies have found different results. A separate study published in the medical journal The Lancet found no benefit to the drug when compared to a placebo.

"Unfortunately, our trial found that while safe and adequately tolerated, remdesivir did not provide significant benefits over placebo," Dr. Bin Cao, the study's lead investigator told The Times. "This is not the outcome we hoped for."

Peter Bach, an intensive care unit physician and researcher at Memorial Sloan Kettering said that while the NIH study was promising, the drug's limited efficacy and the fact that it likely works best before symptoms get serious limits how helpful it would be in the fight against the virus.

"Its availability is not going to move the needle on social distancing relaxation," he tweeted.

But as the number of deaths from the virus continued to rise, the FDA said it is working at "lightning speed" to determine whether to issue an emergency approval.

"We're working with the company to emphasize the necessity of speed while at the same time to understand the data," FDA Commissioner Stephen Hahn told Bloomberg News. "There will be a lot of factors that go into all the regulatory decisions. We want to look at the totality of data to make sure that remdesivir is targeted to the right patients."