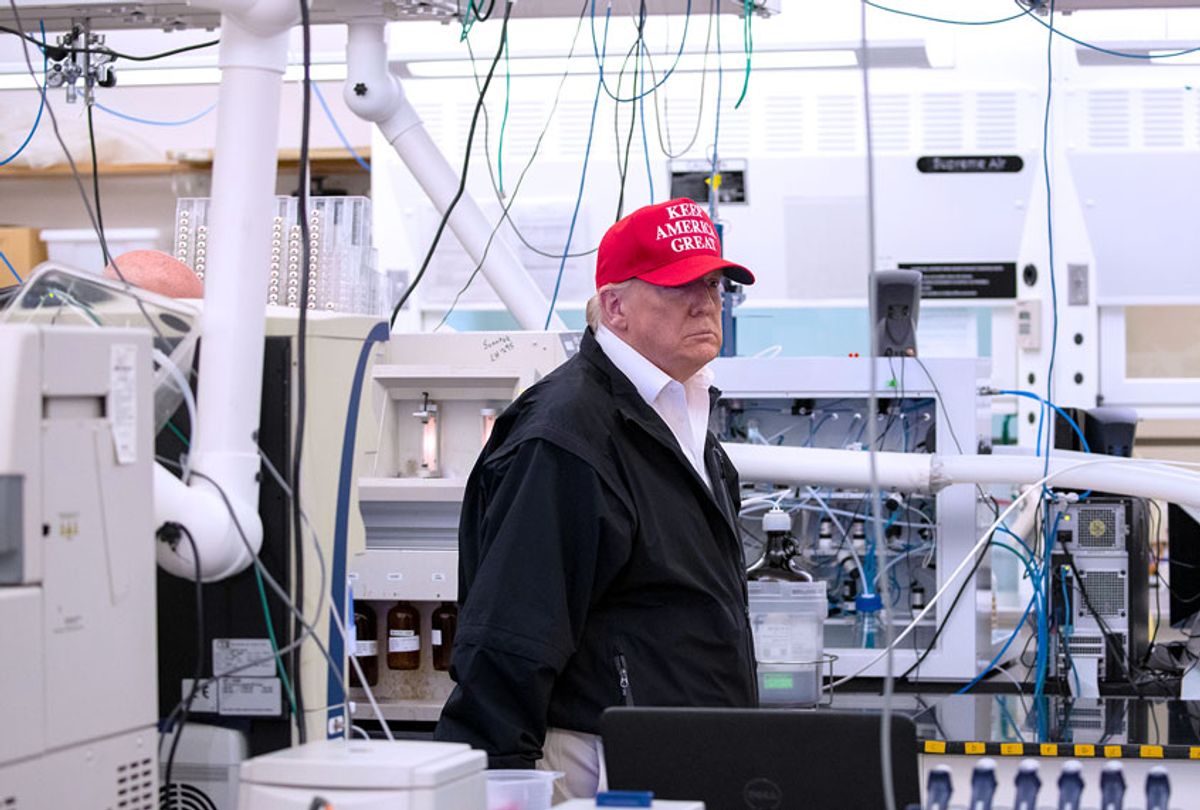 The Centers for Disease Control and Prevention on Tuesday quietly removed bizarre guidelines for using the malaria drug hydroxychloroquine as a potential treatment for the new coronavirus. The unproven treatment has been repeatedly hyped by President Donald Trump in spite of the warnings of Dr. Anthony Fauci.

The CDC published "highly unusual" dosing guidance based on "unattributed anecdotes rather than peer-reviewed science" last month amid pressure on federal health officials from Trump, Reuters reported. The agency now appears to have quietly removed those guidelines from its website this week.

Eli Lee of the watchdog group Citizens for Responsibility and Ethics in Washington first flagged the changes Tuesday.

Instead, the first line of the page now reads: "There are no drugs or other therapeutics approved by the U.S. Food and Drug Administration to prevent or treat COVID-19." The page adds that "hydroxychloroquine and chloroquine are under investigation in clinical trials."

Medical experts were alarmed when the site published the previous guidance.

"Why would CDC be publishing anecdotes? That doesn't make sense. This is very unusual," Dr. Lynn Goldman, the dean of the Milken Institute School of Public Health at George Washington University, told Reuters.

Trump has repeatedly touted the drug, which is also sometimes prescribed to patients with lupus and rheumatoid arthritis, as a potential cure for the coronavirus even as doctors warned that the drug had "major side effects," including "severe cardiac arrhythmias that can even cause death."

The president has dismissed those warnings, questioning: "What do you have to lose?" But the CDC has also warned that the drug "can cause serious health consequences, including death." The Department of Health and Human Services cautioned that clinical trials were needed to "provide scientific evidence that these treatments are effective." The American Medical Association further expressed concern that the rush to order, prescribe and dispense the medication could result in shortages for patients in need.

Trump has repeatedly cited a small French study recently published in a medical journal. However, the publisher put out a statement last week announcing the study did not meet its "expected standards," according to Retraction Watch.

The International Society of Antimicrobial Chemotherapy said it "shares the concerns regarding the above article published recently in the International Journal of Antimicrobial Agents (IJAA). The ISAC Board believes the article does not meet the Society's expected standard, especially relating to the lack of better explanations of the inclusion criteria and the triage of patients to ensure patient safety."

The study, which included just 36 coronavirus patients, reported that hydroxychloroquine treatment was "significantly associated" with reducing and beating the virus.

The study was touted on Fox News by Dr. Oz, the widely-criticized television doctor Trump has asked health officials to seek advice from.

"If it takes me 30,000 patients to show a difference, is that better than showing a difference in 62 patients? If a small trial demonstrates statistically significant differences, you should respect it," he said Monday. "At least pay attention to it."

But the findings were not all they seemed. Despite showing a "100% cure" rate, the study "excluded" four patients — 10% of their original treatment group — who went to the intensive care unit or who died because they fell outside of the study's criteria requiring daily nasal swabs, The Guardian reported.

Though New York Gov. Andrew Cuomo has said that the drug has been "anecdotally" positive in the state, a French hospital said this week it would stop using the drug on at least one patient due to a "major risk" of cardiac issues.

Dr. Michael Ackerman, a genetic cardiologist at the Mayo Clinic, said it was "inexcusable" to push the drug without acknowledging the potential cardiac side effects, particularly when combining the drug with the antibiotic azithromycin as Trump has urged.

"What disturbed me the most was when I was seeing not political officials say these medications are safe but seeing on the news cardiologists and infectious disease specialists say [hydroxychloroquine] is completely safe without even mentioning this rare side effect," he told NBC News, noting that a recent study found that 11% of coronavirus patients receiving the drug cocktail were at risk for cardiac side effects. "This particular medicine is probably the only medication I know of that has become a Republican or a Democrat medication. That's just crazy."

"Yes, these medications overall are really, really safe, so in that sense the president is right," Ackerman said. "But really safe in a population sense doesn't mean that drug is going to be safe enough for the particular patient I'm about to treat."