Joe Biden has 99 problems, but Ukraine ain't one 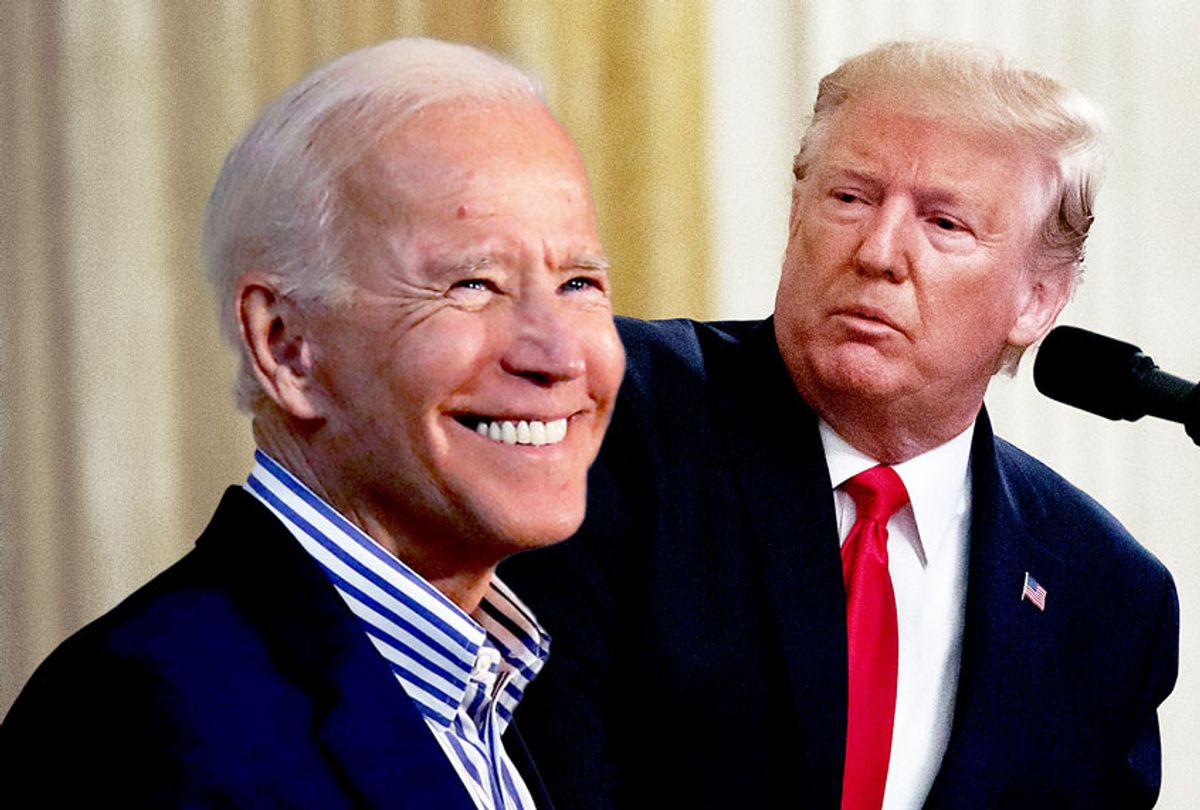 It's time for Americans to take a closer look at former Vice President Joe Biden, the man who stands about an even chance or so of becoming America’s next president. Biden has been wronged by President Donald Trump, who withheld $391 million in military aid from Ukraine while pressuring that nation's leader to announce a spurious criminal investigation into Biden’s son, Hunter. That does not mean that Biden is a saint, or that his past is free of scandals. As far as Biden is concerned, the lesson we should learn from the impeachment hearings is not that he did nothing wrong, but rather that we should separate truth from fiction.

If Trump is right about one thing, he's right that Biden is in a very strong position to beat him in the 2020 presidential election. Who is this man that so many Americans refer to as “Uncle Joe?”

The most important questions for any presidential candidate are about what kind of person he or she is, and what policies he or she would implement. In this respect, Americans are fortunate to have Biden in the race because we pretty much know what he would try to do — extend the legacy of Barack Obama, under whom he served for eight years as vice president.

As reporting from sites like Politico makes clear, the Biden campaign believes that the average Democratic voter isn't as left-wing as many in the media and Twitter-universe makes them out to be. They feel that Obama's record as president was strong and that Americans will want a president who both embraces that legacy and can realistically claim to provide a similar type of leadership. No one will question that Biden was one of Obama's closest and most influential advisers, and as I have recently argued, there's a strong case that Obama was the best American president of the last 50 years. He saved America from the Great Recession, passed comprehensive health care reform, fought for LGBTQ rights, worked to find a humane policy on undocumented immigration, fought to address climate change, concluded the Iraq War and authorized the Navy SEAL raid that killed Osama bin Laden. Certainly Biden deserves some of the credit for these achievements — or, if you oppose Obama's legacy, blame for them.

At the same time, many progressives believe that the Affordable Care Act didn't go far enough, that America's economy is still too unequal to be truly just, that our foreign policy is too belligerent and that a more progressive or activist candidate, like Bernie Sanders or Elizabeth Warren, is better poised to lead the United States into the future. This brings us to the main controversies regarding Biden.

During his 36-year Senate career (from 1973 to 2009), Biden chaired the Senate Judiciary Committee hearings on Clarence Thomas' Supreme Court confirmation, when Anita Hill testified that Thomas had harassed her. Biden also backed Bill Clinton's controversial 1993 crime bill, worked with Ronald Reagan to reduce the top income tax rate, opposed school busing as a means of achieving desegregation, supported a freeze on Social Security spending, opposed antitrust legislation, backed Clinton's deregulation of the financial markets, which contributed to the Wall Street crash of 2008; and supported laws that helped the lending industry over debtors.

Biden also has a worrisome penchant for gaffes, along with a tendency to invade women's personal space (although he has never been accused of sexual misconduct). It is worth noting that every politician has a right to evolve on important issues; the Joe Biden first elected to the Senate in the 1970s is certainly a very different man than the one who became famously chummy with Obama in the 2010s. Nevertheless, while Biden is now presenting himself as Obama: Part Two, it is relevant to analyze the ideas that drove Biden’s political career before he and Obama became inextricably linked in the pages of American history.

3. Biden has a very good chance of beating Trump — both for the reasons you think and for another reason you probably don’t know about.

From regularly attacking the erstwhile veep on Twitter to sending his political thugs to Ukraine to dig up dirt about the man, it is obvious that Trump believes Biden poses a threat to his presidency. Polls also consistently back up that assertion, with Biden regularly ranking at or near the top within the Democratic primaries and — most importantly — regularly outperforming other Democrats in head-to-head contests against Trump. (Most recently, an Investor's Business Daily/TIPP Poll found Biden beating Trump by 10 points. The difference was eight points for Warren and seven for Sanders.) Biden also is ahead of Trump in more of the crucial battleground states than either Warren or Sanders, suggesting that his Electoral College path to victory is stronger than either of theirs.

Yet there is another dimension to Biden’s story that does not receive enough attention. At a time when Americans are looking for presidential candidates who have overcome discrimination — and Biden is the only straight white Christian man among the leading contenders — it's worth noting that Biden is something of a role model for individuals who struggle with disabilities. He has said he was bullied as a child for having a stutter.

"Trump is a bully, and Joe has been standing up to bullies his entire life. Joe’s stuttering, I think, is one of the principal reasons — a major, major, major reason — that he is the good and compassionate and kind man that he is," Valerie Biden Owens, the former vice president's younger sister, told the Los Angeles Times earlier this month. He has recalled how the stutter caused him to be ridiculed by his peers and led to his mother standing up for him on more than one occasion.

This is a critical component of Biden's story. As anyone who has been bullied as a child can tell you — and, for that matter, as anyone who has had to struggle with a disability can tell you — the experiences deeply informs who you are and how you view the world. Whether that happens for better or worse is up to each individual. In Biden's case, as he frequently points out, it taught him empathy for the less fortunate and motivated his career in public service. It also gave him wisdom: As quoted in a powerful recent essay in the Atlantic, Biden explained to another person who suffers from a stutter that “it doesn’t, can’t, define who you are.”

During his first presidential campaign in 1988, Biden’s penchant for gaffes sabotaged his candidacy. He had developed a reputation as a strong orator after delivering a well-received speech at the 1985 Jefferson-Jackson Day dinner in Iowa, but was then revealed to have "borrowed" a portion of a different speech from Neil Kinnock, then the leader of the British Labour Party. This accusation of plagiarism dogged Biden's campaign, even though he had previously given Kinnock credit and neglected to do so due to a memory lapse, with Biden later admitting, "All I had to say was, 'Like Kinnock.' If I'd just said those two works, 'Like Kinnock,' and I didn't. It was my fault, nobody else's fault."

Yet the scandal went deeper than that. It was later revealed that Biden had been accused of plagiarism in law school and had used material from other politicians without properly crediting them. In this election cycle, Biden was discovered to have written a sentence on carbon capture that is nearly identical to the wording of a plan supported by the Carbon Capture Coalition.

5. Biden did nothing wrong in Ukraine.

Now to the most important point: Biden did nothing wrong in Ukraine.

If you dislike Biden because you found Obama's presidency a crushing disappointment, or because you’re turned off by his pre-Obama voting record in the Senate, or because you distrust him after the plagiarism accusations, those are all valid reasons. But if we are to clean up our politics, we must start by clearly distinguishing between inconvenient truth and sinister fiction.

The lie about Ukraine is that, when he was vice president, Joe Biden got a Ukrainian prosecutor fired because he was investigating corruption supposedly perpetrated by his son, Hunter. The Trump administration felt so strongly about pushing this narrative into the 2020 election cycle that it may have been the principal reason military aid to Ukraine was suspended in an attempt to pressuring the government into helping him out. We do know that the Ukrainian government agreed to announce an investigation into Hunter Biden and had even scheduled an interview with CNN's Fareed Zakaria. We also know that other Trump administration officials were concerned that Trump’s behavior toward Ukraine was unusual and inappropriate.

The truth about Ukraine is that Hunter Biden was never under any investigation for his role working for Burisma, a natural gas company. The chief prosecutor who Biden worked to get fired, Viktor Shokin, was under pressure from the Obama administration, America’s allies and Ukrainian anti-corruption activists, all of whom felt he wasn’t doing enough to deal with corruption. There is no evidence that Shokin's removal had anything to do with Hunter Biden. Although Biden boasted about getting Shokin fired, he has never suggested it was because of any specific prosecution.

Trump’s lies about Biden are not limited to Ukraine. He has also pushed the conspiracy theory that Hunter Biden abused his connection to his father to do business in China. Last month, Trump seemed to publicly threaten China into helping him out by saying, “China should start an investigation into the Bidens, because what happened in China is just about as bad as what happened with Ukraine. ... If they don’t do what we want, we have tremendous power.”