Biden would defeat Trump by wider margin in battleground states than Warren or Sanders, poll says

Trump is losing to Biden and Sanders, and ahead of Warren in key battleground states 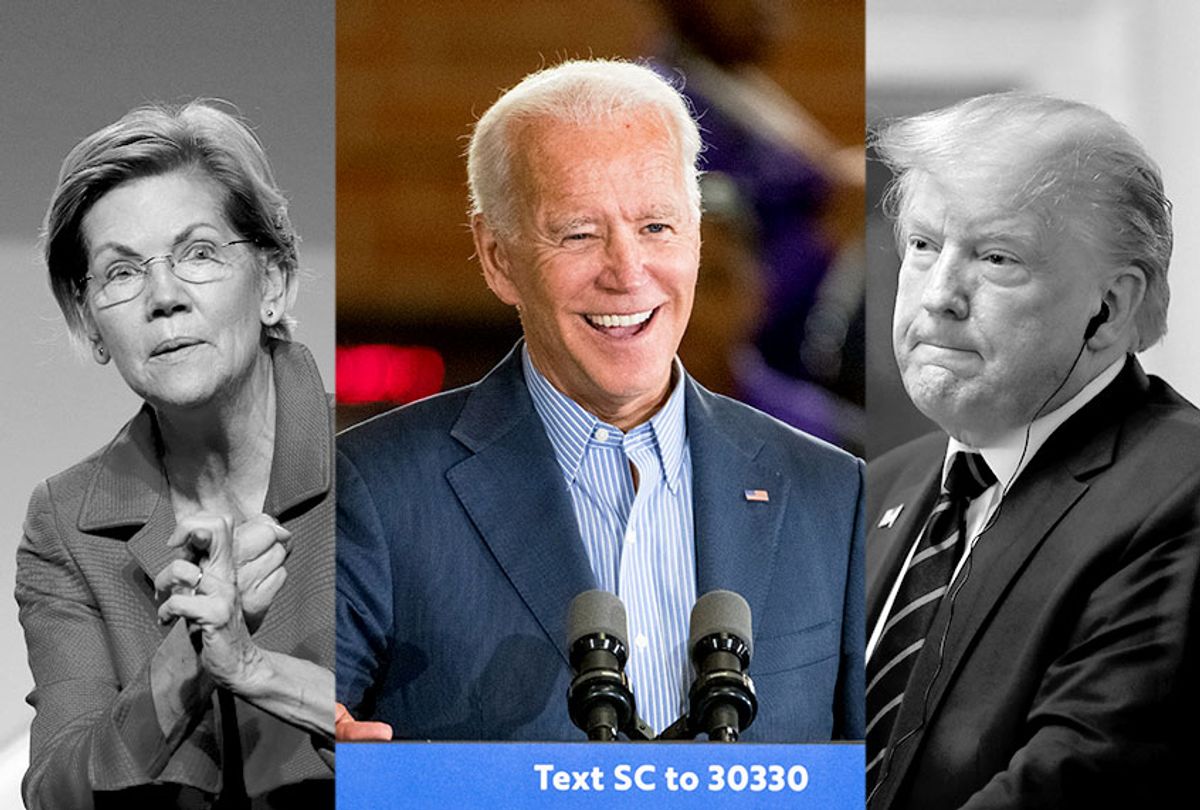 President Donald Trump is losing to former Vice President Joe Biden and ahead of Massachusetts Senator Elizabeth Warren in key battleground states, according to a recent survey from The New York Times.

The polls from The New York Times Upshot and Siena College found that Trump is losing to Biden in four of six battleground states and behind Warren in only one of those states. Trump is ahead of Biden in one state and even with him in another, while Warren is behind Trump in three states and even with him in two. Among registered voters, Vermont Senator Bernie Sanders polled ahead in Michigan, Pennsylvania and Wisconsin.

Trump is ahead of Biden in North Carolina and the two candidates are even in Michigan. With Michigan, Biden’s total would rise to 318 electoral votes, but he would win even without it because the cutoff for victory in the Electoral College in 270 votes.

By contrast, Warren was only ahead of Trump in one state (Arizona) and behind him in three other states (Michigan, Florida and North Carolina). If all the other states voted as current polls anticipate, that would give Trump 264 electoral votes and Warren only 243 electoral votes. The two states where they are even are Wisconsin and Pennsylvania. If either one of them won Pennsylvania after that breakdown, they would win the presidency along with it. Picking up Wisconsin would give Trump a victory, but not do so for Warren.

One possible explanation for this is that Warren is not as widely known to the voting public as Biden nor Sanders. Another is that Biden, being viewed as a more moderate candidate, is generally perceived as more electable than Warren, whose candidacy has recently been met with a backlash from Wall Street, according to CNBC. Sanders has historically done well in Rust Belt states, which may explain his polling numbers to some extent.

Other polls have had bad news for Trump in potential runoffs against the leading Democrats. An NBC/Wall Street Journal poll found that Biden had a nine-point lead over Trump (50 percent to 41 percent) while Warren had an eight point lead (50 percent to 42 percent). A Fox News poll also released today yielded similar results, saying that Biden would defeat Trump in a general election today by 51 percent to 39 percent while Warren would defeat Trump by 46 percent to 41 percent. That survey was criticized by Trump for also revealing that more Americans support impeaching and removing him from office (49 percent) than not doing so (41 percent).

“You’re reading the wrong polls. I have the real polls,” Trump told reporters outside the White House on Sunday. “I have the real polls. The CNN polls are fake. The Fox polls have always been lousy. I tell them they ought to get themselves a real pollster. But the real polls — if you look at the polls that came out this morning — people don’t want anything to do with impeachment. It’s a phony scam. It’s a hoax.”

A spokesperson from Fox News pointed Salon to an earlier statement by the network saying "our polling unit has long been held in high regard for being a nonpartisan source of research."