Twitter is well within their right to call out Trump's fabrication. Does he misunderstand the First Amendment? 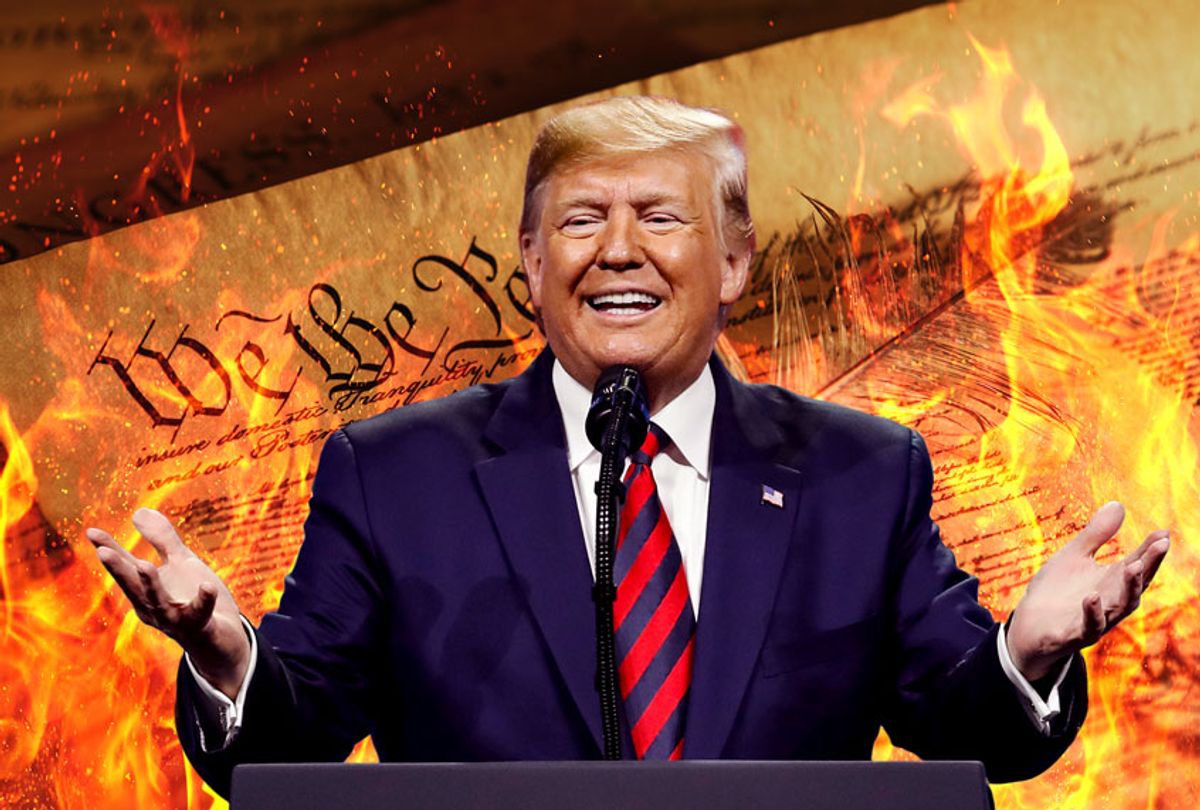 There is no freedom more important than the right to free speech. So why aren't more conservatives speaking out now that President Donald Trump has issued his most serious threat in recent memory to our collective First Amendment rights?

On Wednesday the president threatened Twitter, a social media platform that he has used for half a decade to advance his political cause, after it included a fact-check label on two of his tweets. First things first: Twitter was indisputably correct in saying that Trump had uttered a falsehood when he claimed mail-in ballots are fraudulent. (CEO Jack Dorsey has also defended Trump's right to baselessly accuse one of his critics of murder, so it's not like the platform is consistent in correcting Trump's lies.)

Yet even if Twitter had been factually wrong, it is still a private company that has the right under the First Amendment to criticize our government and its leaders without fear of reprisal or censorship. It is Trump's job as president to protect those rights even — no, especially — when they are used by those who oppose him.

Instead, Trump posted a pair of tweets that directly threatened Twitter's most basic freedoms. In one he wrote that "Republicans feel that Social Media Platforms totally silence conservatives voices" and promised that "we will strongly regulate, or close them down, before we can ever allow this to happen." A little while later he added, "Twitter has now shown that everything we have been saying about them (and their other compatriots) is correct. Big action to follow!"

Politicians and legal scholars are in widespread agreement that Trump's promise is chilling and that his words represent a direct assault on the First Amendment.

"The threat by Donald Trump to shut down social media platforms that he finds objectionable is a dangerous overreaction by a thin-skinned president. Any such move would be blatantly unconstitutional under the First Amendment," Harvard Law professor Laurence Tribe told Salon by email. "That doesn't make the threat harmless, however, because the president has many ways in which he can hurt individual companies, and his threat to do so as a way of silencing dissent is likely to chill freedom of expression and will undermine constitutional democracy in the long run."

Barbara McQuade, a former U.S. attorney for the Eastern District of Michigan, told Salon by email that Trump doesn't have the power to shut down Twitter.

Rick Hasen, a law professor at the University of California–Irvine, expressed a similar opinion.

"Donald Trump cannot close down Twitter," Hasen explained in writing to Salon. "Twitter is a private company and it is entitled to include or exclude people as it sees fit. And if Trump tries to bring DOJ forces against social media companies (perhaps raising antitrust concerns) but does so for partisan reasons, then Trump would be violating the First Amendment."

This is not the first time that Trump has violated the free speech rights of his critics, or attempted to violate them. He has revoked the press passes of media outlets whose employees criticize him; previously, he suggested he would punish Amazon after CEO Jeff Bezos criticized the president, and has followed through on that threat in ways that many critics feel are unconstitutional. He has shared images that incited violence against CNN, a news network whose coverage Trump has trashed for being insufficiently favorable. He has also called for imprisoning people who burn the flag, encouraged attacks on those who protest his rallies, required staffers and interns to sign non-disclosure agreements and threatened litigation against media outlets that have exercised their right to criticize him.

Unlike some of Trump's other transgressions, here is an occasion in which Trump has made his contempt for our First Amendment rights so overt as to be unmistakable. He isn't using indirect means of punishing those who speak ill of him, or denying them access to venues where they can directly confront him with their criticisms, or retweeting images that depict violence occurring against them. He is directly stating that he will "close down" a company, or take "big action" against it, because it won't allow him to use its privately-owned platform to say whatever he wants without contradiction. In the process, he seems to fundamentally misunderstand the First Amendment — in particular, that Twitter, a private platform, has the constitutional right to censor or moderate speech on its platform.

Most of the conservatives and libertarians to whom I reached out for comment on this article did not reply. One, UCLA School of Law Professor Eugene Volokh, referred me to an article he wrote for Reason in which he pointed out that, contrary to Trump's complaints, Twitter is not stifling the president's right to free speech and is instead simply exercising its own right to free speech. (Like the other legal scholars to whom I spoke, Volokh also wrote that Trump does not have the power to shut down Twitter.) He told Salon by email that he believed Trump's tweet about directly regulating Twitter may have advocated "forbid[ding] viewpoint discrimination by online platforms, presumably by passing a statute making them something like a common carrier when it comes to user-generated content — kind of like phone companies have historically been seen as having to provide access to all regardless of viewpoint, or like cable systems have been required to carry local television channels, see Turner Broadcasting System v. FCC (1994)."

He added, "Not a good idea, I think, and it's not clear whether such a must-carry-everyone mandate would be constitutional; but not unprecedented when it comes to regulation of communications platforms." (Volokh also disclosed to Salon that he "co-wrote a Google-commissioned white paper arguing that search engines have a right to control what goes in their search results.")

I also heard back from former Breitbart News London editor-in-chief Raheem Kassam, who now has a podcast with fellow Breitbart alumnus and Trump's former senior counselor, Steve Bannon. He told me by email that "Twitter must and will be brought to heel as a public menace." When I asked what he meant by that, he replied that "Twitter pretends its a public platform, but has increasingly shifted to becoming an editorialized hyper-neo liberal website. It's basically the New York Times but with more op-ed writers. So let them have the same responsibilities and legal liabilities as the NYT's editorial team do." Then I asked if he is worried about a left-wing president following Trump's precedent and violating the free speech rights of his perceived opponents — something that one iconic liberal president, John Kennedy, did by intimidating and spying on members of the media — Kassam referred to the Obamagate conspiracy theory (which, as my Salon colleagues have pointed out, is baseless and motivated by partisanship) and allegations that the IRS under Obama targeted conservatives (an accusation with some factual merit).

"You guys are only panicked now because the playing field is about to get leveled in a big way," Kassam wrote.

Yet to the extent that Kassam is correct in his accusations about liberal leaders, it must be remembered that two wrongs do not make a right. If we are to survive as a democracy, we must always err on the side of making sure that everyone can express their opinions without fear of censorship, intimidation or persecution. It is easy to hold that belief, of course, when it is your side being wronged. The true test of character comes when your opponents are the ones being wronged.

To be clear: This is not a problem limited to Trump. Indeed, there have been times when liberals have not respected the free speech rights of those who disagree with them, or when they have refused to engage with them in civil debate. I personally think the Democratic National Committee was wrong to refuse to let Fox News to host some of their debates; likewise, as I've made clear in my op-eds, I believe hate speech is constitutionally protected and am proud of the intelligent and civil debates I've had with prominent right-wing pundits like Kassam, Fox News' Tucker Carlson and Steve Hilton, and former New Jersey Governor Chris Christie.

In any case, unless the majority of conservatives speak out against Trump's intimidation of Twitter, they will fail that test. And if Trumpism winds up being the wave of the future, that will bode poorly for the cause of liberty. As Thomas Jefferson wrote, "To preserve the freedom of the human mind … and the freedom of the press, every spirit should be ready to devote itself to martyrdom; for as long as we may think as we will, and speak as we think, the condition of man will proceed in improvement."