WTF is "Obamagate"? That's easy: It's Donald Trump's reboot of "but her emails" 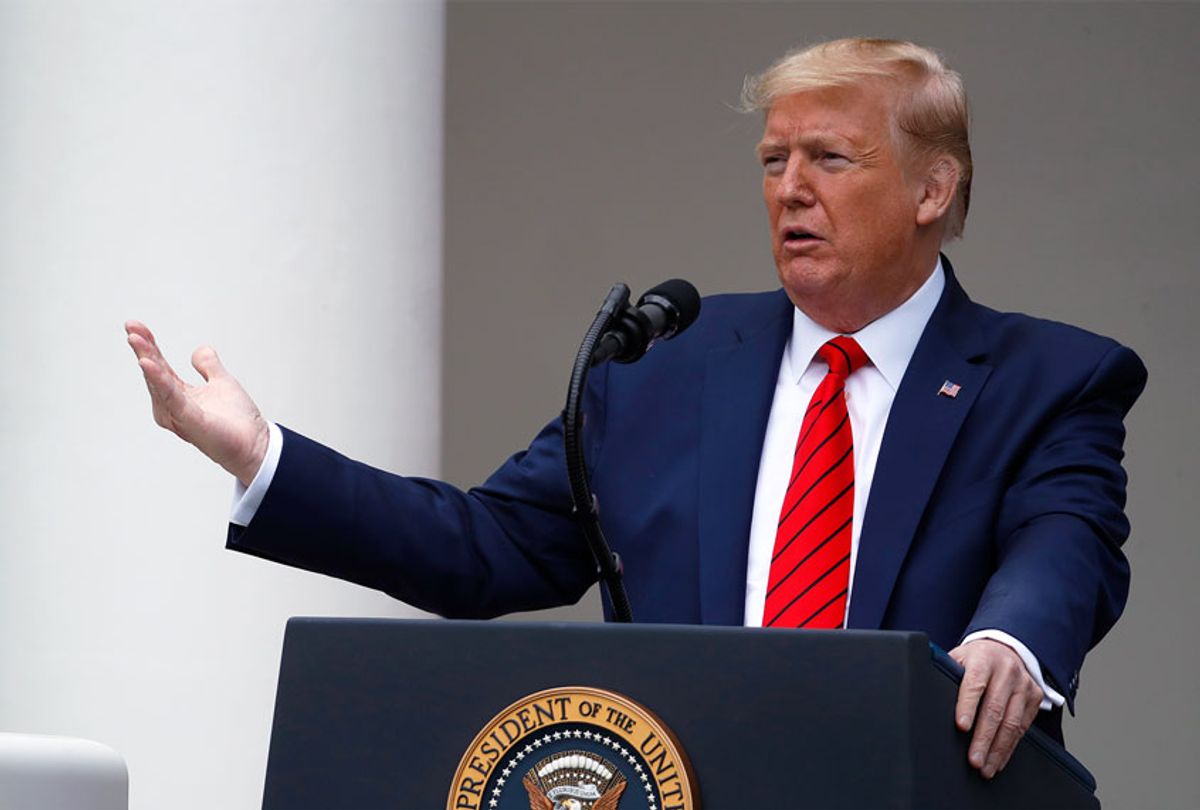 President Donald Trump speaks about the coronavirus during a press briefing in the Rose Garden of the White House, Monday, May 11, 2020, in Washington. (AP Photo/Alex Brandon)
--

Even Donald Trump can't tell us what "Obamagate" is — other than his newest obsession, designed to distract from his total failure to handle the coronavirus pandemic and the resulting economic catastrophe. But with a news media still and always eager to prove it's equally tough on "both sides," it's conceivable that Trump can make Obamagate a thing.

Eager to pretend that the rising death tolls and skyrocketing unemployment rates don't exist, Trump has pivoted back to what he always planned on doing in the 2020 campaign: Pump out a bunch of conspiracy theories about former Vice President Joe Biden and other leading Democrats. His plan has always been to get the mainstream media to elevate these baseless smears until they dominate the 2020 election cycle, sucking attention away from Trump's extensive history of failures, scandals, lies and outright crimes.

And why not? With the help of WikiLeaks and the Russian government — along with the the spinelessness of FBI Director James Comey — Trump was able to trick the media into turning a total non-scandal about Hillary Clinton using a private email account to do government business (something that Trump's people have done on a much larger scale) into a five-alarm fire that lost her the election. Even though diligent journalists discovered that Trump had been accused of numerous sexual assaults, had defrauded countless people, and had run multiple businesses into the ground, voters in exit polls still thought "but her emails" was the bigger scandal.

Trump is trying to do it again, repeating the word "Obamagate" like a wind-up toy monkey, in hopes that the media will take the hint and start to populate this empty word with details that make it sound like a real scandal. But there's no scandal there, as Trump himself proved on Monday during an amazing exchange with the Washington Post's Philip Rucker outside the White House.

Rucker noted that Trump kept saying "Obamagate" was "the biggest political crime in American history," and asked Trump directly: "What crime exactly are you accusing President Obama of committing?"

Trump, shocked that the press wasn't doing his dirty work for him (for once), was flabbergasted.

"Uh, Obamagate. It's been going on for a long time," Trump said, rambling on without answering the question before concluding, "Some terrible things happened, and it should never be allowed to happen in our country again," without saying what those "terrible things" were.

Rucker pressed him: "What is the crime?"

Trump replied, "You know what the crime is. The crime is very obvious to everybody."

This was hilarious but telling. Trump didn't think he needed to come up with an actual accusation, which is understandable. He'd never had to before! Insinuation and a pretense of outrage had worked well enough to send the press on a wild goose chase to generate fake scandals in the past. Consider the 2016 campaign, with story after story about Clinton's "emails," which were always seen as "damaging," even though no one could say what damage her emails had done to whom, or even what alleged crime had been committed. (The FBI declined to prosecute her, since there was literally nothing to prosecute.)

In 2011, when Trump's multi-month project of "just asking questions" about Barack Obama's birth certificate generated enough of a media frenzy that Obama was forced to release his long-form Hawaii birth certificate, something no white president has ever felt compelled to do.

Trump's assumption that he doesn't have to say what "Obamagate" is, exactly, for the media to run with it is sadly proving correct. As Greg Sargent of the Washington Post detailed Thursday, journalists, with help from Republican senators, are starting to color in the boxes of "Obamagate" with enough detail to make it seem substantive. But even the most cursory of glances makes clear there's no there there.

Some in the mainstream press are struggling to circle in on a notion that the Obama administration acted improperly by investigating incoming national security adviser Michael Flynn's shady conduct toward Russia during the presidential transition. But Obama didn't do anything wrong. Trump did.

What actually happened is simple: Obama issued sanctions against Russian leaders in 2016 for interfering with the election. After that, Flynn, before taking office with the Trump administration, had a private conversation with Russian ambassador Sergey Kislyak, in which he assured Kislyak not to worry about the sanctions because Trump would get rid of them. Intelligence officials recorded this conversation, since they had Kislyak under surveillance. Obama officials were understandably concerned about what American was making such assurances to Kislyak and wanted to know who it was. That was their legal right and, more importantly, their patriotic duty.

Republicans, with great fanfare, have announced their "discovery" that Flynn's identity was shared with a number of top Obama officials, including Biden.

This is not a scandal of any kind. Obama's White House was in charge of maintaining the integrity of American elections. The fact that a prominent figure in the incoming administration was secretly assuring Russian leaders that their interference in 2016 was A-OK was important information. The real scandal would have been if the Obama administration had ignored the fact that Flynn was behaving in a potentially treasonous manner.

This story is complicated, and I imagine readers' eyes are starting to cross right about now, with simply trying to figure out what the hell is going on. That's what Trump is counting on — the details are confusing, so voters simply back away with a vague sense that maybe the Obama team did something nefarious, without exactly knowing what that was. That's precisely what happened with "her emails."

Unfortunately, as Sargent notes, it's working. Headlines declaring that the Republicans have released a list of who heard what about Flynn's underhanded behavior are seen as somehow "boosting" Trump's narrative or helping to "discredit" the Russia investigation.

"The new information actually does not 'boost' Trump's claims about the Russia investigation or 'discredit' it," Sargent writes. "And if there is 'no evidence of wrongdoing,' then it cannot legitimately be 'turned into an election issue.'"

Remember, this is story where a high-ranking Trump official — Flynn — delivered a backstage high-five to the Russians for interfering with our election, and then lied to the FBI about it. Now the Trump administration, in a blatantly corrupt move, has tried to force the Department of Justice to drop the charges against Flynn, even though he pled guilty to the original charges. (A federal judge has temporarily put that effort on hold.)

What Trump is currently doing is far worse than anything Richard Nixon ever did with Watergate. Yet a gullible media is working overtime to inflate the narrative that somehow it was Obama who did something wrong, because his administration followed the law and tried to stop Michael Flynn from rewarding a foreign government for interfering with our presidential election.

Why is this happening? There are a few journalists out there who are in the tank for Trump and ready to sell whatever nutty conspiracy theory he throws out. But mostly it's because so much of the mainstream media, terrified of being accused of having a "liberal bias," will go out of its way to minimize real Republican scandals while blowing up often-imaginary Democratic scandals, all in a bid to appear "balanced."

There is no balance here. Obama was a lawful and diligent president who was trying to protect our country's democratic institutions. Trump is a grifting, cheating sleazeball who is weaponizing the DOJ to try to steal an election and who openly invites foreign interference. Any story that doesn't offer clarity on this contrast is misleading the public and cannot be considered legitimate journalism.

This kind of distorted coverage and journalistic water-carrying can work all too well, unfortunately. In 2016, I had dinner with a friend who isn't in politics or journalism, but is generally plugged in and follows the news far more closely than most people. Somehow the topic of Clinton's emails came up and I asked my friend what she thought was in them. She replied that Clinton had accidentally mentioned important state secrets in unsecured emails.

She was shocked to hear, from me, apparently for the first time, that that wasn't true. As Fred Kaplan of Slate, and apparently no one else, carefully laid out at the time, there was nothing in Clinton's emails that even slightly resembled a threat to national security. Out of 30,000 emails, exactly eight contained information that was legally classified as "top secret." Seven of those eight discussed information that had already been covered extensively in the press, even if the U.S. government still considered it classified. The other email discussed an inconsequential conversation with the president of Malawi, a nation no Republican could identify on a world map with 25 guesses. If any foreign spy had gotten to it — and none did, remember? — they would have walked away empty-handed.

My friend is smart. She reads the news voraciously. She understand politics better than half of political journalists, probably more. She didn't know that Clinton's emails had nothing of interest in them. If she didn't know, who could? This was a massive failure on the part of the news media.

So the sad truth is that Donald Trump isn't wrong to believe that he can keep saying "Obamagate" over and over and the news media will do the dirty work of creating a scandal where none exists. It's always worked before. It is starting to work again. The only hope of saving our democracy is that the press finally stops letting its bizarre theology of "balance" lead once again to the promotion of conspiracy theories over facts. As Sargent's article shows, the Washington Post is doing a good job. But will the rest of the media choose to pursue the facts over Trump's invented scandals, or are we doomed to repeat 2016 all over again?