Don't drink the bleach: Why is the elite press still covering for Trump's profound stupidity?

A new media low: "Both sides" coverage of Trump's suggestion that injecting cleaning products might be a cure 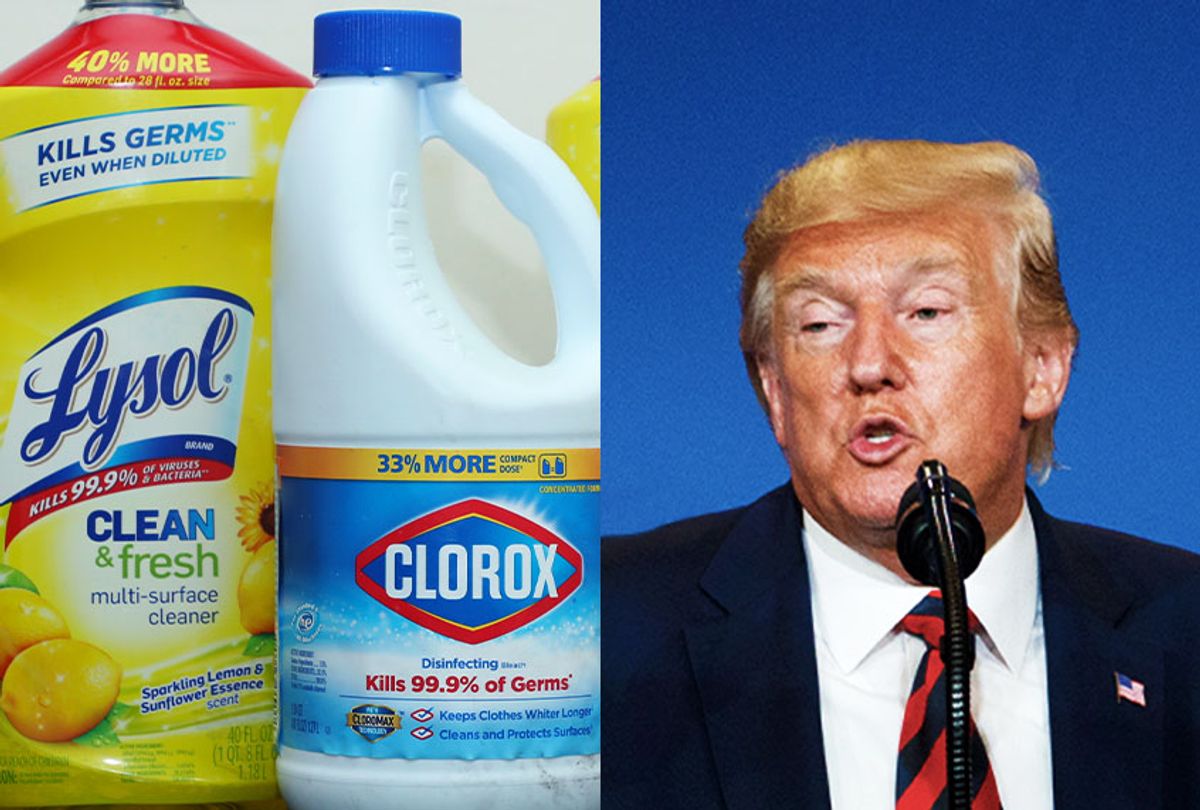 Presented with incontrovertible evidence that Donald Trump is stupid and clueless and that the American people should not follow his advice, reporters and editors in America's top newsrooms averted their eyes.

Home delivery subscribers to the Washington Post, for instance, wouldn't have a clue that Trump on Thursday evening proposed injecting patients with disinfectants to see if they would kill the coronavirus in lungs, as they do on the kitchen counter. There was no mention of it in the print edition.

Yes, Trump actually asked, after hearing a presentation on how bleach and rubbing alcohol can kill the virus on surfaces: "Is there a way we can do something like that, by injection inside or almost a cleaning? Because, you see, it gets in the lungs and it does a tremendous number on the lungs. So it would be interesting to check that."

Is there a stupider, more dangerous thing he could possibly say? Could he possibly give a clearer indication that he is manifestly unfit to lead the nation during a public health crisis? Small children know better than this.

Politico's Brianna Ehley led with the news that Trump "touted new research from his Department of Homeland Security suggesting sunlight, heat and humidity could kill the coronavirus." When she eventually quoted Trump on infecting disinfectant, there was no context, no rebuttal, no explanation.

At Reuters, Steve Holland and Andy Sullivan wrote about the new research: "Trump said the findings should be interpreted cautiously, but also claimed vindication for previously suggesting that the coronavirus might recede in summer." They used his "injection" quote as a kicker at the end of their story, with no comment.

And then there's the New York Times.

An early version of the article by William J. Broad and Dan Levin (seen here as published by a client of its wire service) directly addressed Trump's suggestions — but cast them as a case of Trump and "some experts" being in disagreement.

Here, believe it or not, is their initial lead:

President Donald Trump has long pinned his hopes on the powers of sunlight to defeat the COVID-19 virus. On Thursday, he returned to that theme at the daily White House coronavirus briefing, bringing in a top administration scientist to back up his assertions and eagerly theorizing — dangerously, in the view of some experts — about the powers of sunlight, ultraviolet light and household disinfectants to kill the coronavirus.

After the scientist, William Bryan, the head of science at the Department of Homeland Security, told the briefing that the government had tested how sunlight and disinfectants — including bleach and alcohol — can kill the coronavirus on surfaces in as little as 30 seconds, an excited Trump returned to the lectern.

"Supposing we hit the body with a tremendous — whether it's ultraviolet or just very powerful light," Trump said. "And I think you said that hasn't been checked, but we're going to test it?" he added, turning to Bryan, who had returned to his seat. "And then I said, supposing you brought the light inside the body, either through the skin or some other way."

Apparently reassured that the tests he was proposing would take place, Trump then theorized about the possible medical benefits of disinfectants in the fight against the virus.

At that point, the authors finally added some serious caveats: that "disinfectants can kill not only microbes but humans"; that some of Trump's earlier medical suggestions have had "disastrous effects"; and that emergency management officials quickly warned against them.

And the later version of the article made it clear from the get-go that household disinfectant "would be dangerous if put inside the body."

But this tweet (which the Times deleted Friday morning) will long be remembered as a quintessential example of both-sides-ism — false equivalence that gives two sides equal credence even when one is dangerously wrong.

Not all the mainstream coverage was restrained.

Stephen Collinson wrote for CNN, under the headline "Trump, ever the salesman, is peddling dangerous cures for coronavirus":

He's marketed steaks and real estate, board games and vodka, but nothing the incorrigible salesman has tried to hawk measures up to his latest routine as he speculated on a possible new cure for Covid-19.…

Trump's comments made his extravagant claims for the unproven use of the anti-malarial drug hydroxychloroquine seem peer-reviewed by comparison.

A later version of the AP story led with the warning from the parent company of Lysol "that its products should not be used internally to treat COVID-19 after President Donald Trump wondered about the prospect during a White House briefing."

One Friday morning Washington Post online column, Power Up, failed miserably, describing Trump's dangerously stupid suggestions as "medical musings." But another,  Morning Mix, appropriately headlined the fact that "Trump asked if disinfectants could be injected to kill the coronavirus inside the body. Doctors answered: 'People will die.'"

The media tweets were where it really got hot:

The single most powerful media commentary, however, had to be the tweet by CNN producer Daniel Lewis, showing Deborah Birx — who has emerged as a reliable Trump defender but is, nevertheless, a medical doctor — flinching as Trump spoke.

Despite how easily they got off in the mainstream press, the White House — backed up, of course, by right-wing media — is complaining about the negativity of the coverage:

White House press secretary Kayleigh McEnany issued a statement saying: "President Trump has repeatedly said that Americans should consult with medical doctors regarding coronavirus treatment, a point that he emphasized again during yesterday's briefing. Leave it to the media to irresponsibly take President Trump out of context and run with negative headlines."

Fox News led its website Friday morning with a story headlined "Media erupt over Trump comments on disinfectant as coronavirus cure: Here's what he said."

What he said, however, is really pretty damning. Fuller quotes from the transcript:

President Trump: So I asked Bill [Bryan] a question that probably some of you are thinking of, if you're totally into that world, which I find to be very interesting.So, supposing we hit the body with a tremendous — whether it's ultraviolet or just very powerful light — and I think you said that that hasn't been checked, but you're going to test it.  And then I said, supposing you brought the light inside the body, which you can do either through the skin or in some other way, and I think you said you're going to test that too. It sounds interesting.

Acting Under Secretary Bryan: We'll get to the right folks who could.

Trump: Right. And then I see the disinfectant, where it knocks it out in a minute. One minute. And is there a way we can do something like that, by injection inside or almost a cleaning? Because you see it gets in the lungs and it does a tremendous number on the lungs. So it would be interesting to check that.  So, that, you're going to have to use medical doctors with. But it sounds — it sounds interesting to me.

So we'll see. But the whole concept of the light, the way it kills it in one minute, that's — that's pretty powerful.

Trump was later asked to clarify:

Question: But I — just, can I ask about — the president mentioned the idea of cleaners, like bleach and isopropyl alcohol you mentioned. There's no scenario that that could be injected into a person, is there? I mean —

Bryan: No, I'm here to talk about the findings that we had in the study. We won't do that within that lab and our lab. So —

Trump: It wouldn't be through injection. We're talking about through almost a cleaning, sterilization of an area. Maybe it works, maybe it doesn't work. But it certainly has a big effect if it's on a stationary object.

Later, an obviously incredulous Philip Rucker, the Washington Post's White House correspondent, interjected with the obvious question — a polite version of, "What the hell are you talking about?"

Question: But, sir, you're the president.

Trump: Deborah, have you ever heard of that? The heat and the light, relative to certain viruses, yes, but relative to this virus?

Dr. Birx:  Not as a treatment. I mean, certainly fever —

Dr. Birx:  — is a good thing. When you have a fever, it helps your body respond. But not as — I've not seen heat or [inaudible].

Trump: I think it's a great thing to look at. I mean, you know. OK?

Question: But respectfully, sir, you're the president. And people tuning into these briefings, they want to get information and guidance and want to know what to do.

Question: They're not looking for a rumor.

Trump: Hey, Phil. I'm the president and you're fake news. And you know what I'll say to you? I'll say it very nicely. I know you well.

Question: Why do you say that?

Trump: I know you well. Because I know the guy; I see what he writes. He's a total faker.

Trump tried to distance himself from those comments on Friday morning, telling reporters: "I was asking sarcastically to reporters just like you to see what would happen."

But that's just what he says after he says something, when he finally realizes he shouldn't have said it.

It wasn't sarcastic, and reporters shouldn't quote him credulously about that. It was stupid and dangerous, and they should say so.