Obamagate! Trump is peddling a new fake scandal — but reality is causing him big problems

Sure, Bill Barr and Fox News will play along with this latest distraction. But there's no way around 83,000 deaths 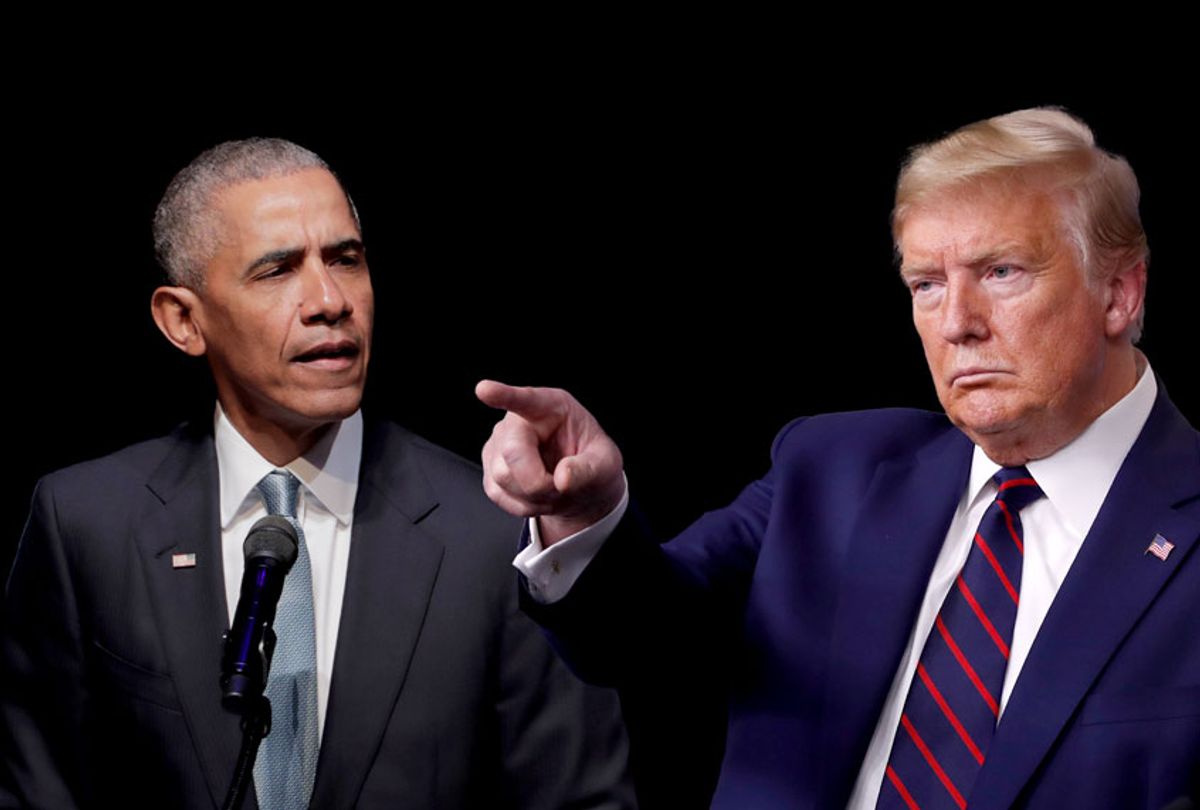 On Monday afternoon, President Trump tried once again to declare victory in the fight against what he calls "the invisible enemy" by holding one of his so-called briefings in the Rose Garden to celebrate America's allegedly successful testing program. As one would expect, trying to sell the assembled press on such a blatant lie did not go well. At best, the testing program has been "anemic and spotty," as former President Obama has put it, and the long delays and dithering in the response have led to the deaths of 83,000 people, and counting, within just a couple of months.

It was a sad and perfunctory performance, ending with a racist attack on an Asian-American reporter, after which Trump flounced off the stage like a disappointed second runner-up at one of his sleazy pageants.

He is clearly very upset that the medical community hasn't devised a magic cure and that the virus isn't succumbing to his repeated exhortations to "just go away." The grand reopening of the economy is a chaotic mess and the "numbers" he's so obsessed with keep going in the wrong direction. But his friends in the media and his top henchman at the Department of Justice, Attorney General Bill Barr, have come up with something thrilling to distract him from his troubles and make the pain go away.

They're calling it "Obamagate," and on Mother's Day Trump spent nearly the entire day tweeting about it in a hysterical frenzy. When asked at the press conference by the Washington Post's Philip Rucker to explain what he had meant when he tweeted that Obama had committed "the biggest political crime in American history, by far," Trump replied, "You know what the crime is. The crime is very obvious to everybody. All you have to do is read the newspapers, except yours."

Of course he doesn't understand it, but then neither does anyone else. Salon's Igor Derysh wrote up an excellent rundown on the main points of this so-called scandal and it's the same old bizarro-world version of events in which the FBI didn't sabotage Hillary Clinton's campaign with the 11th-hour resurrection of the idiotic email scandal while keeping mum about Russian interference on Trump's behalf. In the Trumpified version, the "deep state" was actually working on behalf of Clinton to take down Trump. Then, when he heroically thwarted their efforts they conspired to destroy him once he was in office by colluding with a long list of foreign actors, the entire intelligence community, the Democratic National Committee and the media to frame him with the Russia investigation in a slow-moving coup. (One that was highly ineffective, you'd have to say.)

The alleged new wrinkle is that the Michael Flynn case supposedly offers proof that Obama and Joe Biden were directing the conspiracy because they knew about Flynn's perfectly innocent activities during the transition and trapped him into lying to the FBI.

None of it makes any sense whatsoever. As the Atlantic's David Frum explained:

The "Obamagate" that Trump tweets about — like the comic-book universes on which it seems to be modeled — is a tangle of backstories. The main characters do things for reasons that make no objective sense, things that can be decoded only by obsessive superfans on long Reddit threads.

Needless to say, that doesn't matter to the Trump supporters. They are as excited as five-year-olds on Christmas Eve, so overstimulated they are on the verge of wetting their pants. The full focus of right-wing media is on this now, both echoing Trump's manic tweeting and feeding him more material.

On Fox News, the supposed straight-news anchors are as breathless as the Trump TV hosts in the evening. They can hardly find time to fit in their usual hydroxychloroquine features or loving paeans to armed protesters demanding haircuts. The coronavirus itself is now a secondary story at best.

Barr has clearly been whispering sweet somethings in the president's ear about the "investigation of the investigation" being run by special counsel John Durham bearing some kind of fruit. Barr has already shown he's willing to use the Department of Justice to pursue this ridiculous pseudo-scandal on Trump's behalf with his crude interference in the Roger Stone and Michael Flynn cases. Although it's highly unlikely that the attorney general has the guts to go after Obama or Biden themselves, he may find a way to indict some of Trump's personal bête noires, such as former CIA director John Brennan, former FBI director James Comey or former FBI agent Peter Strzok.

Trump's ecstatic followers are aquiver with anticipation, but none so much as the president himself. He is self-soothing with fever dreams of vengeance and exoneration, which allows him to ignore the reality he is facing as tens of thousands of Americans die on his watch and millions lose their jobs while he flounders about in public and fulminates against his political enemies.

But no matter how much Trump tweets about Obama, this pesky pandemic won't go away. What he fatuously insisted was the "greatest economy the world has ever known" is quickly becoming the worst economy since the Great Depression. There might even be cracks emerging in the Republican establishment. Politico reported recently that Senate Republicans are actually balking at pursuing "Obamagate," apparently unconvinced that staging a show trial in the middle of a global catastrophe is a winning electoral strategy.

According to Gabriel Sherman in Vanity Fair, Trump World is very nervous about this. Sherman quotes a former West Wing official saying "The numbers are fucking terrible. There's massive anxiety in the GOP that he's gonna take them all down with him."

Trump's dismal performance in this crisis should certainly make them anxious. Senate Republicans had the chance just four months ago to take a stand against his clear incompetence and corruption. Instead, they chose to back him to the hilt. By contrast, Governors around the country who have shown leadership and independence, of both parties, are seeing massive popularity while those who've acted as Trump sycophants are not doing so well.

Trump is polling worst of all. The new Washington Post-Ipsos and CNN polls show large majorities disapproving of Trump's handling of the coronavirus crisis. His reaction? Embarrassing, childish jealousy:

Trump knows he has failed. But he doesn't know what to do. So he's gone back to nursing his grievances and stoking the resentments of his base. There still seem to be people who are happy to follow him down that rabbit hole. But as the bodies pile up and the food lines grow longer, the old Trump sideshows like "Obamagate" may not seem quite so amusing to the American people. As the rising reputations of numerous state governors show, in a crisis people look for competence and leadership. Trump's antics can't hide the fact that he is entirely lacking either of those qualities.