Live and let die: Was this Trump's "Mission accomplished" moment?

Trump has actually decided that thousands more must die for "the American way." Will this finally finish him? 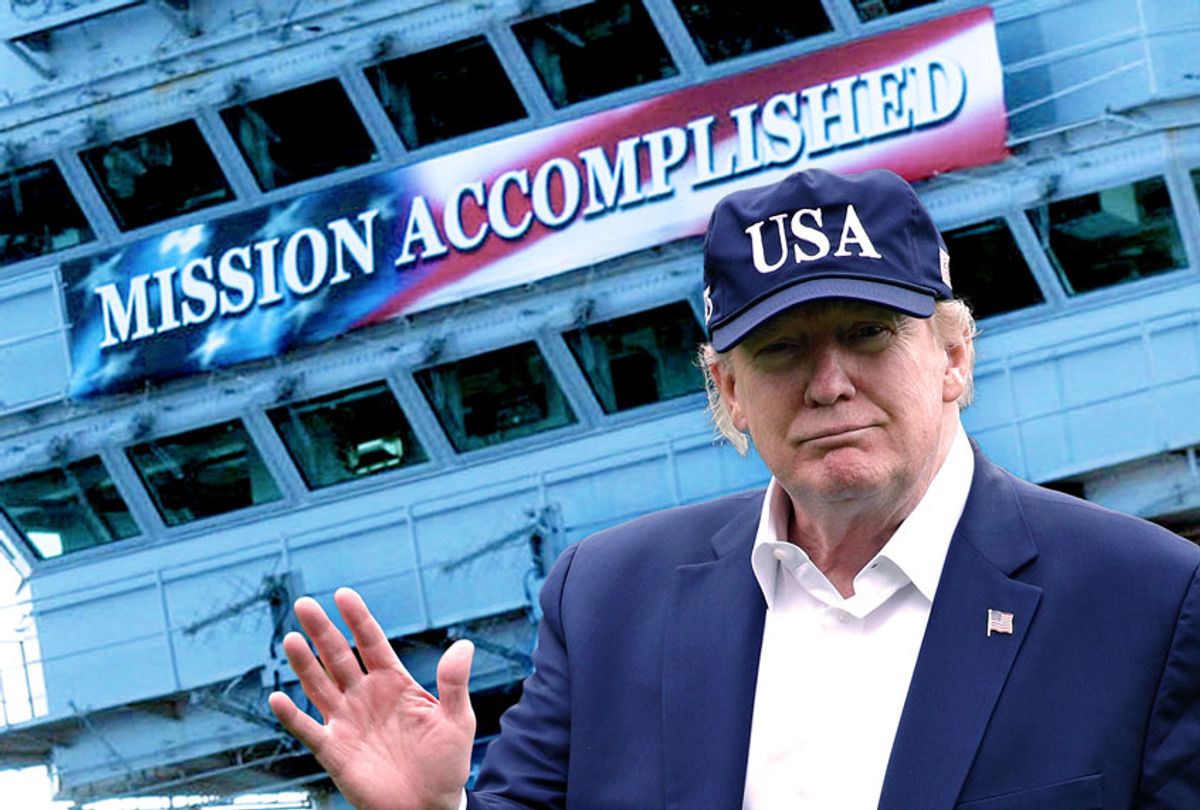 If you look at pictures of the anti-lockdown protests around the country you'll often see signs that say "Fire Fauci," of course meaning Dr. Anthony Fauci, the leading scientist on the president's coronavirus task force. Those signs will probably multiply after the MAGA crowds see Fauci's answer when he was asked what he thinks of states reopening for business even as the virus is still spreading and the death rate is rising. He said it all depends on a crucial question: "How many deaths and how much suffering are you willing to accept to get back to what you want to be?"

The implication is clear: This means much more death and suffering.

Over the weekend the other top scientist on the task force, Dr. Deborah Birx, said it was "devastatingly worrisome" to see all these protesters in close quarters, failing to wear masks and not observing social distancing guidelines. Donald Trump's followers weren't too happy about her comments either.

Many of those protesters are being manipulated by political actors working on behalf of big business, super PACs and organizations affiliated with the Trump's re-election campaign. The idea is to force governors to withdraw their stay-at-home orders and tell everyone to go back to normal. Judging from Twitter and Facebook commentary, if Trump himself weren't pushing so hard these people wouldn't be so receptive to that message. This is about supporting their man and nothing more. According to the new Monmouth poll, those who oppose lockdowns even believe Trump over Fox News.

Polls also show, however, that the vast majority of Americans, including Republicans, trust the scientists to tell the truth about the virus. The latest Washington Post/University of Maryland poll found that Dr. Fauci has an approval rating of 74 percent. Even two-thirds of Republicans have high regard for him. In fact, the poll found that "public health scientists in the federal government overall are rated 71 percent positive."

Unfortunately for Trump, Fauci, Birx and virtually every other public health expert find the current insistence on opening up the economy in this haphazard, chaotic way — with no strategy and no methods to ensure the safety of businesses, workers and customers — to be, well, completely nuts.

Naturally, this means that Trump plans to keep the scientists from speaking publicly as much as possible. On Tuesday we learned that the White House plans to disband the coronavirus task force by the end of this month, which undoubtedly means the scientists will recede into obscurity as the Great Economic Traveling Revival Show takes its place. According to the New York Times, they haven't been meeting much the last couple of weeks anyway.

Nothing ever came of the "Opening Up America Again Congressional Group," whose only purpose seems to have been to humiliate Sen. Mitt Romney of Utah, the only Republican senator not invited. As for the ;"Opening Up America Council," composed of business leaders who didn't even know they'd been named or have any idea what they were supposed to do, that one never got off the ground at all. Indeed, the coronavirus task force itself only managed to produce some guidelines that nobody's following while Jared Kushner sabotaged the logistical and procurement functions through massive corruption and cronyism, so maybe that's no great loss either.

What has become clear in the last few days is that the Trump administration has made a decision.

The idea behind the stay-at-home and social distancing guidelines was always to "flatten the curve" of viral spread in order to ensure that the health care system wasn't overwhelmed and buy time to get medical equipment, testing and tracing in place. That would keep the virus contained as much as possible and allow the economy to safely reopen. None of that happened.

Trump's officials flailed around, unable to perform even the most basic tasks one would expect of the federal government in a disaster, while frantically running in circles trying to look as if they were doing something. Now, since they cannot do the job, they have apparently decided to let the virus "wash over the country" as Trump wanted to do from the beginning. If some governors can manage to mitigate the worst of it in their states, good for them. The president has gone back to his full-time job of running for re-election.

The person who has best articulated this pivot is former New Jersey governor Chris Christie, who obviously has Trump's ear. He explained the rationale to CNN's Dana Bash on her podcast this week: "Of course, everybody wants to save every life they can — but the question is, towards what end, ultimately?" One would normally assume that saving lives was an end in itself, but apparently that's no longer an obvious American value.

Bash asked for his message if he were in the White House and he said:

The message is that the American people have gone through significant death before. We sacrificed those lives. We sent our young men during World War II over to Europe, out to the Pacific, knowing, knowing that many of them would not come home alive. And we decided to make that sacrifice because what we were standing up for was the American way of life. In the very same way now we have to stand up for the American way of life.

Trump echoed these words on Tuesday:

It's daft enough that Trump and Christie think they can persuade the American people to see this as a "war" against a virus which they can win by exposing themselves to illness or death at workplaces, stores and restaurants. But they must also sell people on the idea that it's heroic to contract this potentially lethal and highly contagious illness and pass it along to others.

"Kill your co-workers, friends and family to save the American way of life!" doesn't sound like a winning campaign slogan to me. But what do I know?

As Salon's Amanda Marcotte observed earlier this week, this rush to "open up" will end up being the worst of both worlds. The virus will continue to rage while the economy continues to sputter as many Americans get sick and everyone remains fearful, with no plan, process or safeguards to assure people they are safe outside their homes.

I'm not sure the president and his men have the slightest concern. Trump traveled to a mask factory in Arizona on Tuesday, to hold what amounted to a campaign rally. He didn't wear a mask himself, of course. Here's the theme music that was played:

"Live and let die" ought to be Donald Trump's epitaph.