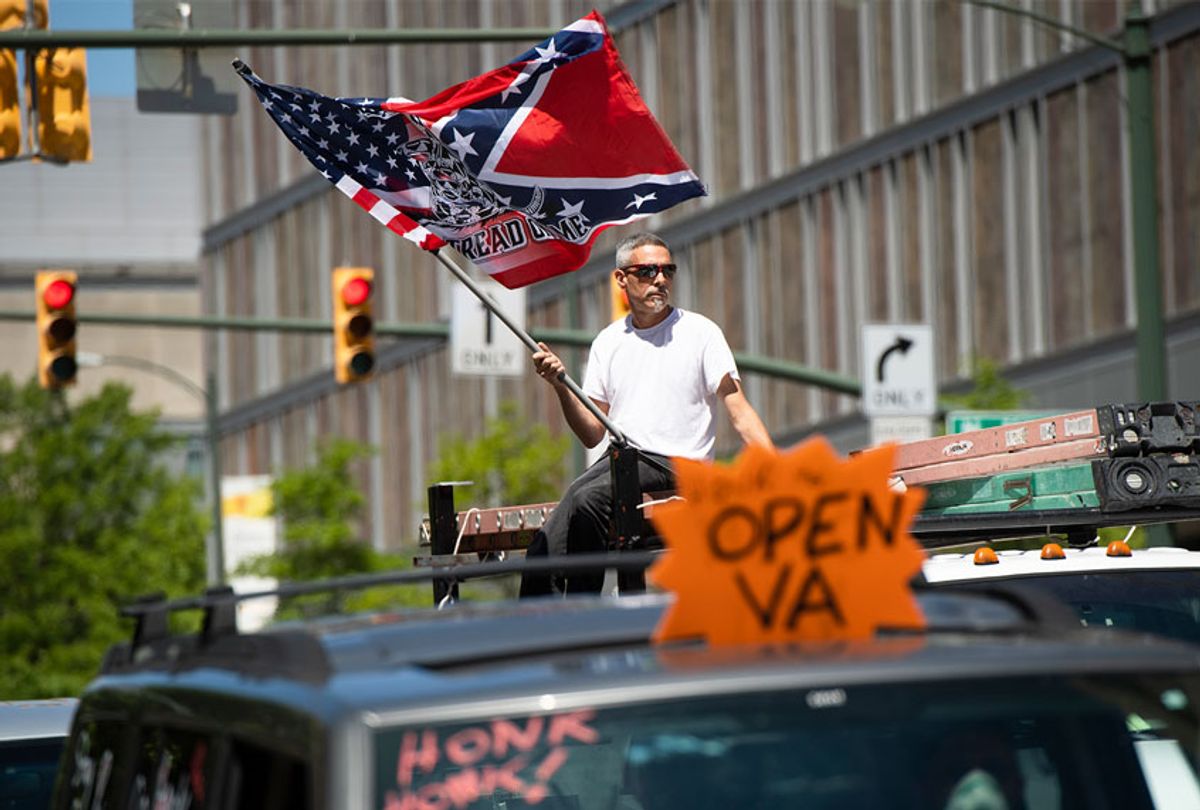 Demonstrators are seen near Capitol Square during a rally to demand that Gov. Ralph Northam (D) lift restrictions that have closed certain businesses in Virginia since the coronavirus outbreak (Tom Williams/CQ-Roll Call, Inc via Getty Images)
--

On Sunday, Michigan Gov. Gretchen Whitmer, a Democrat, appeared on CNN and declared that the protests against stay-at-home orders that plagued her state capital, as well as numerous others, "depicted some of the worst racism and awful parts of our history in this country," pointing to the regular appearance of swastikas, nooses, Nazi slogans and the American swastika, also known as the Confederate battle flag. (We can safely assume that the usual excuse of "Southern pride" used to defend the Rebel flag doesn't apply in Michigan or Ohio or Illinois, states where thousands of young men fought and died for the Union.)

Conservatives cried foul at Whitmer's words, of course, but there's little point in denying it. We all have eyes and ears, and no one is mistaking the protesters for people who would flinch if they heard a friend casually use the n-word in conversation.

The question isn't whether white identity politics and racism are fueling the protests. The real question is why. Racism isn't some kind of magical force that shields your body from the coronavirus. Even Donald "Inject Bleach" Trump hasn't been fool enough to suggest you can defeat the virus by wrapping yourself in the Confederate flag. Yet there's no denying that there's a direct correlation between racist attitudes and the belief that the coronavirus is an overblown hoax and the lockdowns are the result of a widespread leftist conspiracy.

That isn't just true of the protesters, either. The most prominent voices in media and politics who are egging them on and denouncing stay-at-home orders also happen to be the people who are doing their utmost to mainstream white nationalist ideology.

Trump, of course, is the most prominent example of this. He has been eagerly cheering on the protesters, starting with his "LIBERATE" tweets last month that encouraged protesters who were defying social distancing recommendations.

This past weekend, Trump continued to publicly support the far-right protesters, who stormed the Michigan state capitol with guns in a clear bid to intimidate and threaten state politicians out of voting to continue the restrictions on commerce and movement that are meant to keep the coronavirus from spreading. Trump even called them "very good people," an eerie echo of the words — "very fine people" — he used to praise the neo-Nazis who rioted in Charlottesville in 2017.

In the media, two of the biggest lockdown opponents are also two of the loudest voices seeking to bring white nationalism into the mainstream of American politics.

Over the weekend, Laura Ingraham of Fox News retweeted propaganda from a notorious white nationalist group, VDare. The tweet blamed immigrants of color for spreading the coronavirus at a meatpacking plant, in a blatant bid to racialize a virus that experts believe was primarily introduced in the U.S. by visitors from Europe, not by immigrants from Africa, Asia or Latin America.

Ingraham has been at the forefront of coronavirus conspiracy theory, denouncing everything from mask-wearing to scientific studies that debunk supposed miracle cures as part of a massive conspiracy to hype the threat of the disease. She even hosted a segment denouncing CNN anchors for reporting on their own experiences with COVID-19, clearly threatened by the way such reports make the disease seem both relatable and terrifying.

Ingraham is a major conduit of white nationalist ideology from the fringes to the mainstream, as documented by this 2018 Media Matters report that shows how she uses her perch at Fox News to stoke the belief that "demographic changes" — unsubtle code for growing communities of color — constitute a national emergency.

Same story with Tucker Carlson, whose white nationalist leanings have been thoroughly documented for years. Carlson initially took the coronavirus seriously, in distinction to many other Fox News hosts. But after stay-at-home orders became widespread, he took a hard right turn into denialism, doing segment after segment portraying the social distancing measures as an illegitimate power grab and implying that fears of the virus are being deliberately exaggerated to justify the shutdowns.

With this kind of prompting from Trump and major media figures, it's no surprise that white nationalists and other far-right groups fueled by white identity politics have led the protests.

As the Southern Poverty Law Center explained in a recent report, while the anti-lockdown protests were organized and funded by wealthy right-wing donors, far-right groups like the Proud Boys "quickly realized" the value of the protests to amplify their proto-fascist views, recruit new members and further ingratiate themselves with Republican politicians.

Neil MacFarquhar of the New York Times expanded on this in a piece on Sunday, reporting that the far right sees the crisis as "a potent recruiting tool" its various groups can exploit "to bolster their white supremacist, anti-government agenda".

David Neiwert, a journalist who has covered the far right for decades, wrote at Daily Kos that far-right groups are seizing on the crisis, hoping they can use it to kick-start "the long-sought 'second civil war' they believe is on the verge of erupting in the United States." This partly illuminates the significance of Confederate flags at the protests, displayed by those who clearly hope the forces of racism and reactionary politics will win the second time around.

To a large degree, then, the marriage of racist politics to the anti-lockdown agenda is opportunistic. Trump himself has clearly indicated he thinks both that his re-election prospects hinge more on the economy than on the number of people dead from COVID-19 (partly because he still thinks he can cover up the latter) and that the economy will come roaring back to life if the lockdowns are ended. (This is doubtful!) Trump's biggest champions, who share his racist agenda, are backing his play in the hopes that he's right and that the combination of reopening the economy while minimizing or obscuring the body count will get him re-elected.

But as with so much of the horror show that is unfolding in the era of Trump, the rot runs deeper than political expediency. There's obviously something deeply compelling to white identity ideologues about the idea that this virus is a hoax concocted by the "deep state," beyond their desire to defend Trump.

The far right has grown increasingly hostile to the government in the face of social programs — most recently Obamacare — that they view as redistributing money from "deserving" white people to people of color. All the bellyaching about "tyranny" and patriotic cosplay is about creating a moral justification for anti-government views that are rooted in racist resentment and xenophobia. The lockdown protests are about further enshrining their hatred of Democrats, and their reluctance to pay taxes or share public goods with nonwhite people, as resistance to "tyranny."

There's no doubt in my mind, either, that the protests are fueled by the fact that the coronavirus pandemic is disproportionately affecting people of color and ravaging urban areas that have long been demonized by right wing media and Trump. While no one has stupid enough to suggest that white skin somehow shields you from the virus (at least not so far), a lot of rural and suburban white people who oppose the shutdowns are viewing it through a racialized lens. This is gently being referred to as the "urban-rural divide" on the issue, but should be understood as white conservatives who resenting having to give up their haircuts and dinners out at Chili's to protect the health of people living in racially diverse cities.

Of course, what's really happening is pretty much the opposite: The lockdowns are likely keeping the virus from spreading further into rural and suburban America (though the numbers in those areas are noticeably beginning to rise, despite the media's focus on New York and other large cities). With Republican governors in many states beginning to ease restrictions to demonstrate their fealty to Trump, there's a not-small chance that the relative safety that white people living in less dense areas currently experience will evaporate.

But if that happens, don't expect right-wingers who oppose the lockdowns to apologize for not taking this seriously. They'll just pivot to blaming cities and people of color for "spreading" the virus, even though those are the people and places who have most firmly supported the measures meant to contain the virus in the first place. The American right, like their feckless orange-skinned leader, will never accept blame for their failures, even as the corpses pile up.