"You see the mask, and you think you are not safe," the Fox News host says. "You are not back to normal" 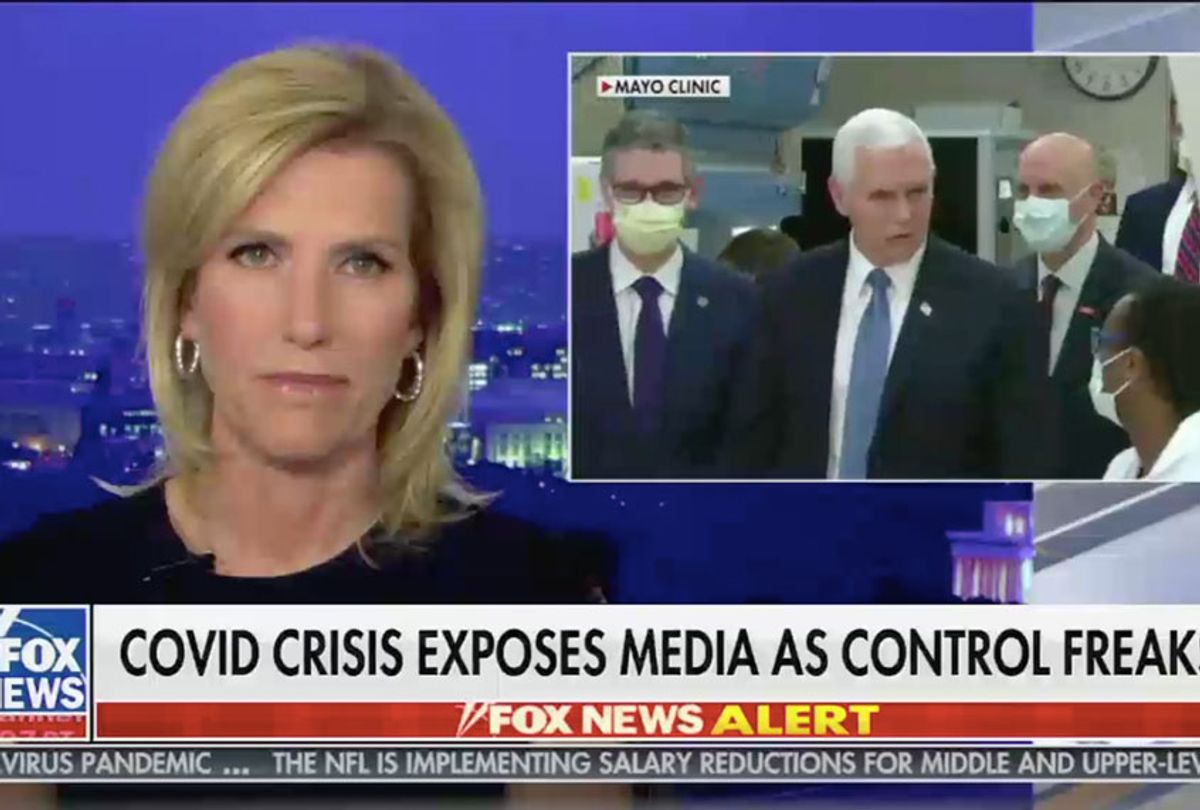 Laura Ingraham used her platform on Fox News this week to peddle a dangerous conspiracy theory, which falsely claims that guidance to wear masks in public is a plot to sow "fear and intimidation" among Americans rather than help protect them against the new coronavirus.

The Fox News host, who is not a doctor, has relentlessly spread misinformation about the coronavirus pandemic. She was among the first of her colleagues to promote an unproven drug treatment for coronavirus patients despite questions about its efficacy. Doctors warned that hydroxychloroquine has significant side effects and could even lead to death when combined with the antibiotic azithromycin.

Ingraham also dedicated more than five minutes of airtime last week to mocking CNN anchors who tested positive for COVID-19, attempting to justify her actions by saying "they're always kind of nasty to us."

The new misinformation was disseminated as the Trump loyalist attempted to defend Vice President Mike Pence, who was criticized for not wearing a mask on a recent visit to the Mayo Clinic. Ingraham, who has no scientific background, extolled unproven claims from the right-wing radio host Rush Limbaugh, who has also peddled conspiracy theories about the pandemic on his program for months.

The Fox News host then played a montage of CNN personalities criticizing Pence.

"Was Chris Cuomo wearing a mask out in the Hamptons the other week? I don't know, maybe," she speculated before casting doubt on the motives of the experts who influenced guidance to wear masks.

"They'll say this whole mask thing is settled science just like they do with climate change. Of course, it is not — and they know it," she said. "Our own experts have gone from masks aren't necessary to masks are essential and you have to wear them when you go jogging in just a few weeks time."

Guidance about the utility of wearing masks has evolved as more data has become available. Second lady Karen Pence claimed in a "Fox & Friends" appearance Thursday that her husband, who chairs the White House coronavirus task force, had somehow only learned of the Mayo Clinic's face mask mandate after he visiting with a patient.

"It was actually after he left Mayo Clinic that he found out that they had a policy of asking everyone to wear a mask," she claimed. The clinic itself disputed this in a since-deleted tweet, and CNN reported that the vice president's office was briefed days in advance.

The Centers for Disease Control, a government agency whose head official briefs the vice president regularly, has published guidance that Americans wear masks, "especially in areas of significant community-based transmission."

Ingraham then springboarded off a recent Limbaugh radio segment by falsely claiming that a nebulous "they" of puppeteers in the media had leaned on the image of the mask to sow fear.

"Rush Limbaugh made a great point — as he always does — on the radio the other day. And he said the virus itself — as it weakens and states start reopening, the media that have been selling panic, panic, panic for weeks and weeks and weeks, they have fewer images to sell their hysteria to justify continued lockdowns. But the masks, well they're kind of a constant reminder. You see the mask, and you think you are not safe. You are not back to normal — not even close."

Taken as as whole, the conspiratorial comments are a marked departure from the main even for Ingraham, who along with her Fox News primetime colleagues has peddled misinformation about the coronavirus for week. Limbaugh has also regularly trafficked in coronavirus conspiracy theories, though he reversed course on stay-home orders when he interviewed the vice president earlier this month.

"You don't want to have to shut it down again after it reopens," he told the vice president.

The week before that interview, Limbaugh said, "I mean we're going to have to adapt and accept that people will continue to die after we reopen the economy. We have to remember that people died every day in America before the coronavirus came along."

Though it's true that Americans die every day, the coronavirus has killed nearly 60,000 people since late March — the equivalent of 20 9/11 attacks — edging out cancer and heart disease to become the leading cause of death in the country for weeks.

Ingraham also chided Dr. Anthony Fauci, the nation's top expert on infectious diseases, for saying that he now believed it was "inevitable" that we will see a second wave of coronavirus infections.

"It's not going to disappear from the planet," he said, "which means as we get into next season, in my mind, it's inevitable that we will have a return of the virus. Or maybe it never even went away."

"On what scientific basis is he saying this?" Is it settled science that the virus will return?" Ingraham asked herself. "No, it's not."