This is now Trump's official policy: Deflect all the blame, steal all the credit

In a fit of childish desperation, Trump forces his signature onto stimulus checks and blames WHO for pandemic 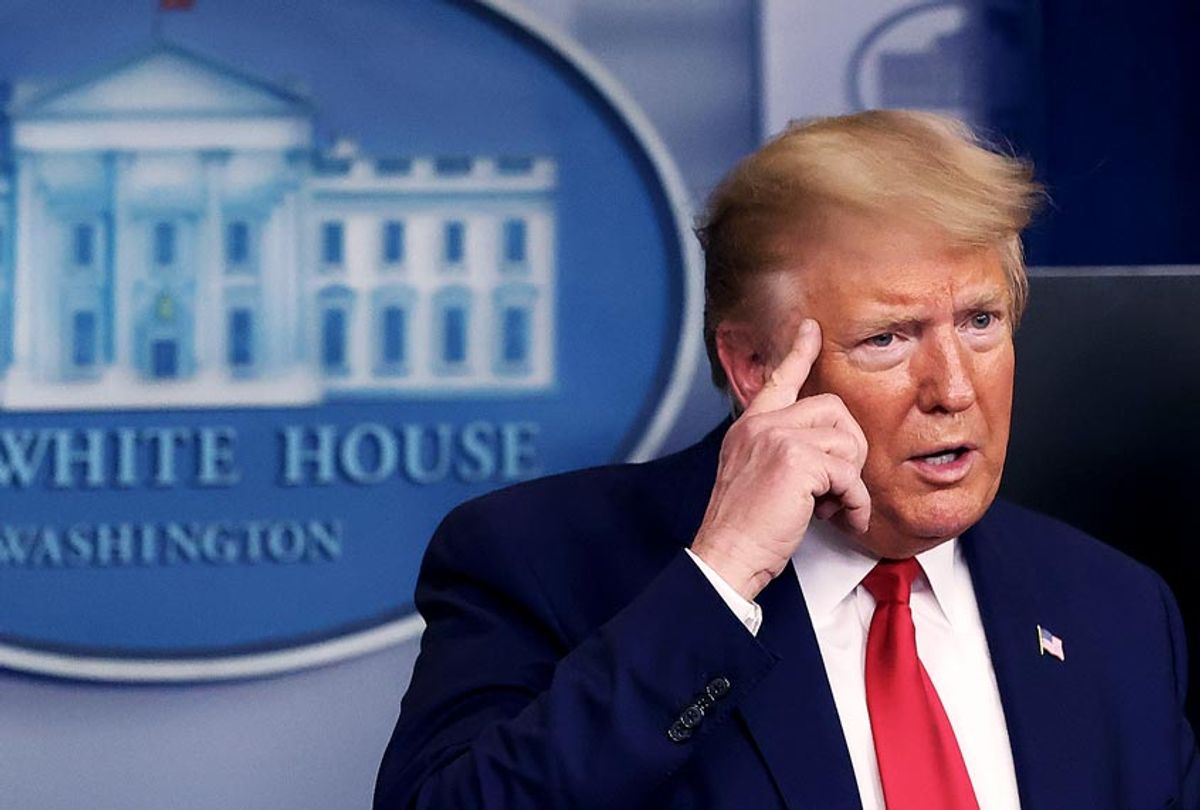 The most remarkable thing about Donald Trump is that he is a man with no redeeming qualities whatsoever. Most people, even the most evil, have a thing or two you can say about them: Harvey Weinstein had a discerning eye for movies. O.J. Simpson was a tremendous athlete. Nazi sympathizers Charles Lindbergh and Henry Ford were successful pioneers in their fields. But Trump has been a failure in every way — as a businessman and as a human being.

His only successes, as a reality TV host and a presidential candidate, were due not to any redeemable qualities, but to his total lack of them. TV producer Mark Burnett needed a camera-hungry narcissist to be the villain on "The Apprentice" and Trump fit the bill. Similarly, right-wing voters needed a sociopath to inflict on the rest of us, to punish the nation for twice electing a black man as president, and this whiny, half-literate racist was tailor-made for the task.

Trump's only marketable skill, simply put, is being an asshole. As such, he has relied heavily on two strategies to prop up his lie that he's a productive member of society: Shamelessly stealing credit for other people's work and deflecting blame for his almost infinite failures — often to the people who are trying to clean up his messes. Now, in his desperation to bamboozle the public into thinking he's somehow managing the coronavirus crisis — when his incompetence is the main cause of that crisis — he's making his credit-stealing and blame-deflecting into official government policy.

On the credit-hogging front, Trump is now making the Treasury Department sign his name to the stimulus checks that will, in theory, be mailed out to Americans at some point in this year. Legally, the president can't be the official signatory on government checks — which must be signed by a Treasury official — so instead, in a bit of reality TV theater, Trump's replica autograph will literally be a decoration on the left side of the check, albeit a decoration meant to fool people into thinking it's the legal binding signature.

This is classic Trumpian credit-stealing. Trump didn't have anything to do with these checks. The credit belongs to the Democrats in Congress, led by House Speaker Nancy Pelosi and Senate Minority Leader Chuck Schumer, who pushed hard for these payments even as Senate Majority Leader Mitch McConnell dragged his feet. All Trump did was sign his name to the legislation, motivated more as an act of self-preservation than out of any concern for public welfare.

In fact, while Congress was working on the stimulus bill responsible for those checks, Trump was reportedly kicking around the White House, bored out of his mind from the lack of busywork such as visits with diplomats and parties. It apparently didn't even occur to Trump to fill his time by working on the legislation — which is honestly just as well, since he would only have made things worse.

But now the Oval Office toddler — who definitely has no idea what was in the stimulus package — is rushing forward to take full credit. It's reminiscent of that incident where Trump showed up at a charity fundraiser, despite having given no money, and literally sat in the seat of the guy who had donated money, playing the role of generous person for one night.

Perhaps more alarming than the childish credit-stealing, however, is Trump's announcement on Tuesday that he's cutting off U.S. payments to the World Health Organization, in a naked bid to foist the blame for his own failures off on this venerable arm of the United Nations.

"So much death has been caused by their mistakes," Trump declared, accusing WHO of "severely mismanaging and covering up the spread of the coronavirus" and pushing "Chinese misinformation."

This is, of course, classic Trumpian projection, where he takes his failures and flaws and tries to push them on someone else — frequently someone who is actively trying to clean up a mess Trump made.

Covering up the spread of the coronavirus? That would be Trump, who has spent the past few months doing whatever he could to limit the use of testing, even as public health experts have made clear that widespread testing is the only way to restart the economy. But Trump got it into his head that as long as there was no testing, he could bamboozle the public into thinking there was also no virus, so now we're months behind where we need to be if there's any hope of returning to normal life.

Severely mismanaging the crisis? Trump again! He has been handing out has been handling out medical supplies on a patronage system, based on what politicians praise him — not on what cities or states actually need them. He's been none-too-subtly encouraging red-state voters to ignore the CDC recommendations to shutter businesses, leading to more viral spread. And now he's building a committee to "reopen" the economy that is blatantly structured around the profit motives of his rich friends, and not around what is needed for public health and economic recovery.

Unnecessary delays that caused the death rate to skyrocket? Would you guess that this is also Trump, who spent months minimizing the threat after he'd been warned, declaring that Democratic concerns about COVID-19 were a "hoax," rejecting public health officials who called for a widespread shutdown of schools and businesses, declaring that the virus was "very much under control in the USA" and promising that someday soon, "like a miracle, it will disappear."

Pushing Chinese misinformation? Yep, Trump! He was warned, going all the way back to November, that China was facing an outbreak and that their government, as authoritarian governments tend to do, was minimizing and lying about it. But instead of trusting his own intelligence officials, Trump decided to protect his political and economic relationship with Chinese President Xi Jinping, siding with Xi over U.S. intelligence agencies.

China has been working very hard to contain the Coronavirus. The United States greatly appreciates their efforts and transparency. It will all work out well. In particular, on behalf of the American People, I want to thank President Xi!

....he will be successful, especially as the weather starts to warm & the virus hopefully becomes weaker, and then gone. Great discipline is taking place in China, as President Xi strongly leads what will be a very successful operation. We are working closely with China to help!

WHO is a critical agency at any time, but especially now, in the middle of a pandemic. As Mark Goldberg at U.N. Dispatch explained in March, WHO is "at the center of a herculean effort to contain, coordinate, and manage the kind of global cooperation that is required to confront a virus that does not respect national borders."

The choice of WHO as Trump's latest scapegoat is, sadly, not surprising. Trump, no doubt guided by Bible-thumping Vice President Mike Pence, routinely does favors for the Christian right whenever he's feeling down, so he can be assured of their loyalty and organizing power no matter how badly he fails. And the Christian right hates WHO for fighting against unsafe abortion, and fighting for better sex education, affordable contraception and health care access for LGBTQ people.

Of course, the death and economic destruction have only emphasized how critical it is that Trump be defeated in November, if this country is to survive. So there's good reason to worry that these tactics will help Trump achieve his only important goal, which is to win re-election. (He certainly doesn't care about death or job loss in human terms, but he does understand they may damage his chances.)

Will this stuff move the needle? It's hard to see that. Trump voters have already decided they'd rather die than admit that electing Trump was a mistake. The rest of the country probably won't be fooled by a fake signature, and won't be pleased to hear Trump is cutting health care funding when the world needs it most. Trump has gotten much further than most of us could have imagined, of course, with his ham-fisted tactics borne strictly from his own ego needs. But if these latest moves stink of desperation, it's because Trump, has run this country deep into the ground, and is well and truly desperate. Hopefully, most Americans will see these grasping, flailing actions as what they are.