Trump and Laura Ingraham, who have no medical experience, have repeatedly pushed hydroxychloroquine on Americans 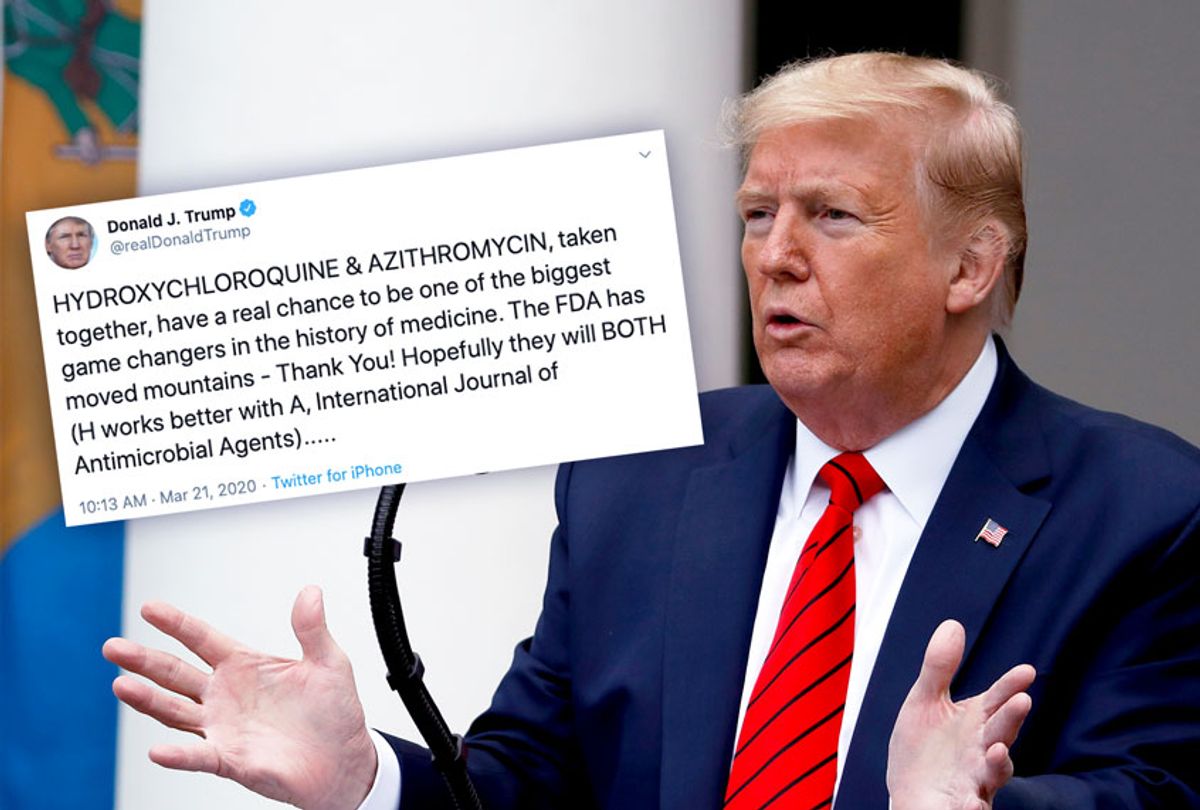 Newly released research has concluded that hydroxychloroquine, an unproven drug treatment for the new coronavirus repeatedly touted by President Donald Trump and Fox News host like Laura Ingraham, offered no benefit to COVID-19 patients who were hospitalized in New York.

The retrospective study, which was published Monday in the Journal of the American Medical Association, also did not find any benefit when the drug was taken in tandem with the antibiotic azithromycin.

Trump, who is not a doctor, has repeatedly pushed hydroxychloroquine during press briefings and on Twitter, tweeting in March that "HYDROXYCHLOROQUINE & AZITHROMYCIN, taken together, have a real chance to be one of the biggest game changers in the history of medicine."

The president, who has no medical background whatsoever, later added that he hoped the two drugs would be "put in use IMMEDIATELY. PEOPLE ARE DYING, MOVE FAST, and GOD BLESS EVERYONE!"

Trump vowed that the drug was safe because "it's been used for a long time," a claim which medical professionals have repeatedly debunked as junk science.

"We have to be careful, Laura, that we don't assume something works based on an anecdotal report that's not controlled," Dr. Anthony Fauci, head of the National Institute for Allergy and Infectious Diseases, recently told Fox News host and hydroxychloroquine enthusiast Laura Ingraham on her primetime show. "And I refer specifically to hydroxychloroquine. There's a lot of buzz out there on the Internet — on the social media — about that. We need to look at it in a scientific way."

Researchers in the latest study examined the medical records of 1,438 patients admitted in late March to 25 New York-area hospitals.

"The fast moving public health implications of the COVID-19 pandemic necessitates that we examine potential treatments for the disease in the most rapid yet careful manner possible," Dr. David Holtgrave, Dean of the School of Public Health at State University of New York at Albany and the study's lead author, said in a statement.

"This observational study has given us an important early look at some key questions related to prescribing patterns of hydroxychloroquine, azithromycin and chloroquine," he said. "Unfortunately, we did not observe benefits of the most used drug (hydroxychloroquine with or without azithromycin) in this group of seriously ill, hospitalized patients."

The research supports findings of previous trials, including a retrospective study of patients at U.S. veterans hospitals, which have indicated that the drug can cause serious heart problems, particularly when paired with azithromycin. Patients receiving both drugs together were more likely to experience cardiac arrest than those who received one or neither of the therapies, researchers found.

The FDA authorized use of the drug in coronavirus patients in March in spite of thin substantiating evidence. The agency later warned against the treatment in April. According to Politico, some of Holtgrave's data was shared with federal officials two weeks prior to publication.

As the case for the treatment weakened over the last few weeks, Trump has gone largely silent. But Ingraham as recently as last week implored the president to revoke the FDA's warning.

The patients in Holtgrave's study were severely ill, which correlates with higher rates of co-morbidities such as diabetes and cardiac problems. The paper cautioned that "the interpretation of these findings may be limited by the observational design." Studies currently in progress will analyze less severe cases, as well as preventive application, though there is no evidence that the drug is an effective inoculant.

Asked whether he would dedicate more research to the treatment, Holtzgrave told Salon: "I can say quickly that I plan no additional studies of hydroxychloroquine at this particular time."

More than 80,000 Americans have died of COVID-19 since Trump first publicly mentioned hydroxychloroquine as promising treatment on March 19.