Trump and Fox hosts have touted a drug called hydroxychloroquine for COVID-19, even though its efficacy is unproven 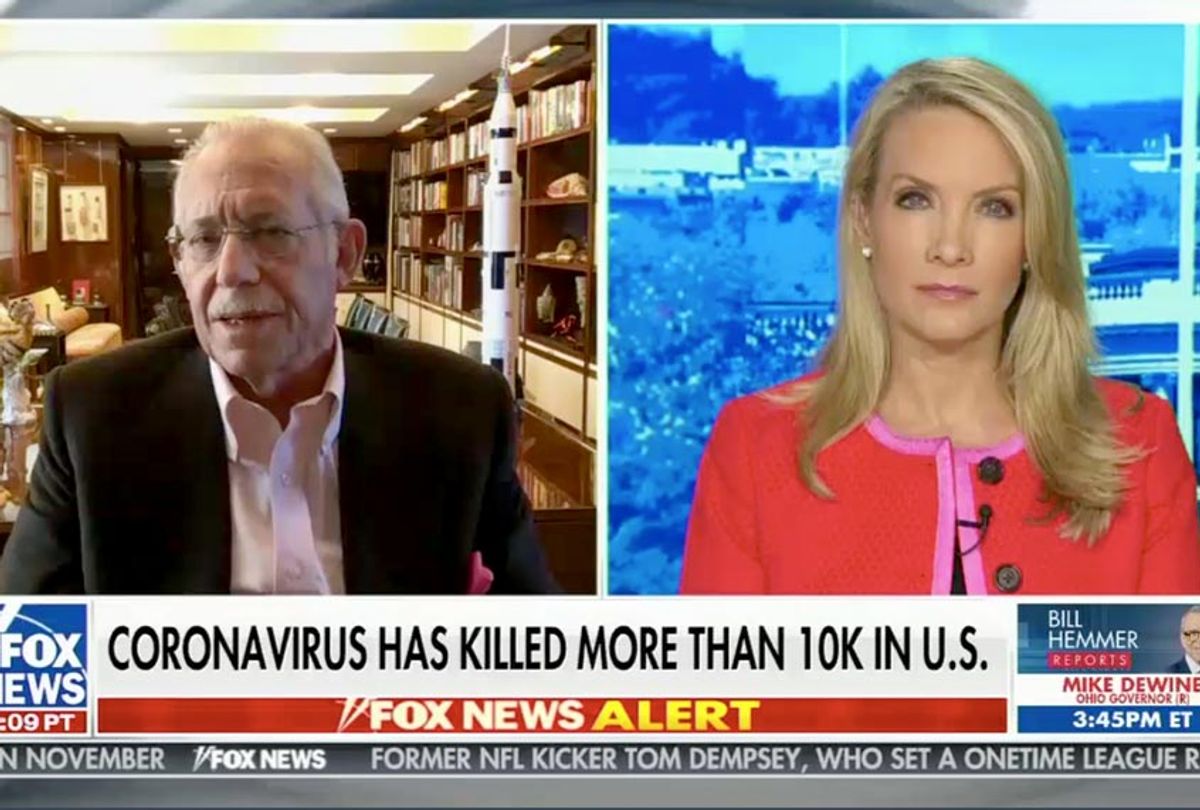 Dr. William Haseltine, a biologist renowned for his work in confronting the HIV/AIDS epidemic, fighting anthrax and advancing our knowledge of the human genome, told Fox News on Monday that an unproven drug treatment for the new coronavirus hyped by President Donald Trump was a "quack cure."

"It's sad to me that people are promoting that drug. We know already from studies at best it will have a very mild effect — at very best," Haseltine told Fox News host Dana Perino about hydroxychloroquine, an anti-malarial drug that Trump has repeatedly promoted against the advice given by Dr. Anthony Fauci.

After reviewing how previous studies show the drug to either have no effect or only a "very mild" one, Haseltine said "the thing that makes me sad about that story is some people may take it who are on other medications or have other underlying conditions and may have very serious — even life threatening — consequences. It is not something to take unless a doctor prescribes it."

Perino then asked Haseltine about "stories of people saying that they've had this Lazarus effect by using this drug," an apparent reference to a claim made by her Fox News colleague Laura Ingraham.

Haseltine replied, "That is nonsense — complete and utter nonsense. And, in any situation, there are always going to be people who promote one kind of quack cure or another, and there are Lazarus effects. In every epidemic I've ever looked at, it's always the case."

Shaughnessy Naughton, a chemist and the president of a nonprofit PAC named 314 Action that elects scientists to Congress, told Salon on Tuesday that "I think the real problem is what it speaks about Donald Trump's management of this crisis. It's no different than when he said, 'It's only affecting 15 people,' or 'it's going away in April,' or 'there's a test for anybody who wants a test' or 'there's a vaccine in the horizon.' Now he's hyping a drug where we don't really know what the efficacy or safety of it is. It speaks to his chaotic mismanagement of this crisis."

Trump stirred up controversy last month when he tweeted that "HYDROXYCHLOROQUINE & AZITHROMYCIN, taken together, have a real chance to be one of the biggest game changers in the history of medicine." He later added that he hoped the two drugs would be "put in use IMMEDIATELY. PEOPLE ARE DYING, MOVE FAST, and GOD BLESS EVERYONE!"

Ingraham joined Trump in touting the drug, claiming that "one patient was described as Lazarus getting up after . . . he was like on death's door. And they started getting a protocol of hydroxychloroquine at Lenox Hill, and it suddenly — like Lazarus, up from the grave. I mean, that's an actual case."

Rodney J.Y. Ho — a professor and director of the Targeted, Long-acting and Combination Anti-Retroviral Therapy (TLC-ART) program at the University of Washington — told Salon last month that although "drug levels achieved in blood with current dosing regimen for hydroxychloroquine is higher than what is needed in test tubes to kill COVID-19 virus," this does not mean the drug can effectively treat it.

"Nothing has been tested thoroughly by the FDA, but because it's available by prescription and it's a pill, you can order it," Ho said.

Haseltine himself told Salon last month that Trump bears a considerable amount of blame for the extent to which the pandemic has ravaged America.

"He should have been warning us it was coming," Haseltine said. "He should have been preparing by stockpiling all the necessary equipment. But even today we're not doing what we should do. Let me put it that way. What we should be doing is contact tracing [identifying people who may have come in contact with infected patients] and having mandatory quarantines for everybody who's been exposed. And quarantining not at home, but in hotel rooms, single occupancy hotel rooms."

He also told Salon that we "don't know" how difficult it will be to develop a vaccine.

"With SARS 1, people tried to make vaccines in animals, including monkeys, but it didn't work very well," Haseltine added. "So they tried what they thought would work, which was using a surface protein of the virus. And they didn't work very well to stop the virus and they didn't last for very long. So there hasn't been a successful virus vaccine developed for any of the coronaviruses. That suggests it might be difficult but we don't know yet. I'm hoping it's going to be easy, but nobody knows."

He continued, "It is an unresolved question at this point. If you want to know why, I can give you some information about why."

You can watch the segment below via Media Matters for America: