Trump's smears of Biden have only started: Can the former veep fight back?

Turn the page on impeachment — but Trump's attacks will keep coming. Do they reveal that he fears Biden most? 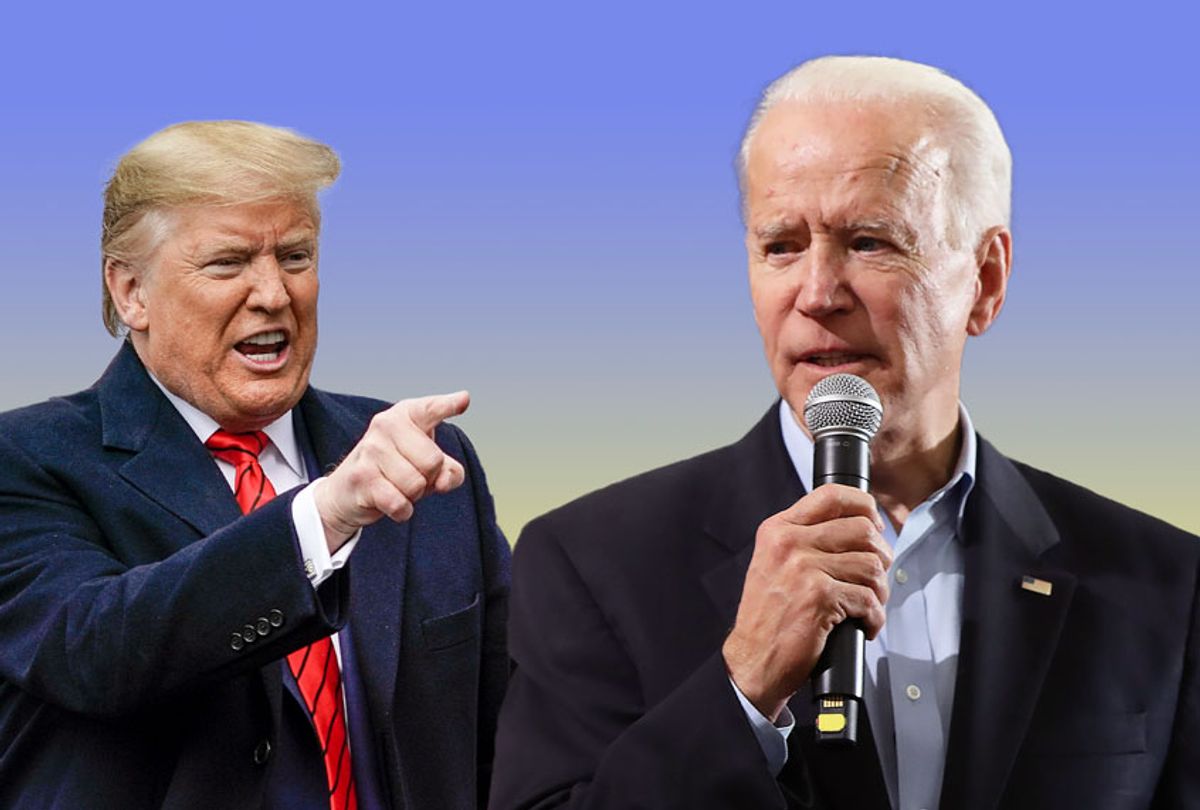 Donald Trump's impeachment trial is all but over, with his acquittal virtually certain. But its effect on the 2020 presidential election remains unclear. Trump was impeached, after all, because he withheld hundreds of millions of dollars in military aid to Ukraine in an effort to force that nation into opening an investigation into Joe Biden, based on the discredited conspiracy theory that the former vice president got a Ukrainian prosecutor named Viktor Shokin fired to cover up supposed illegal activities by his son Hunter Biden. (Trump also wanted an investigation into an even more delusional conspiracy theory, the one which holds that a Democratic National Committee server somehow wound up in Ukraine.)

Trump and his allies have made clear that they won't let this matter drop if Biden is Trump's Democratic opponent in the general election. This whole tangled affair is not easy to follow, even for political insiders, and has at least two intersecting vectors: First, what did Trump do in Ukraine and Russia, and what are the ramifications for foreign policy and the global order? Second, how will Biden's campaign react to Trump's false or exaggerated accusations, especially given the long GOP history of throwing mud at Democratic presidential candidates?

Michael Carpenter, a longtime ally and adviser of Joe Biden and the managing director of the Penn Biden Center at the University of Pennsylvania, argued that Trump's erratic conduct of Ukraine and Russia policy could have a devastating effect on Eastern Europe. Carpenter referred to the specific charge that Trump withheld military aid to Ukraine in an effort to create a scenario that would discredit Biden's presidential campaign.

Such tactics "are common to a lot of authoritarian states around the world," Carpenter told Salon. "Not just Vladimir Putin, but central Asia, Latin America, Africa, etc., where foreign policy and assistance is withheld in order to secure personal favors.'

If the anonymous whistleblower had not revealed Trump's July 25 phone call with Ukrainian President Volodymyr Zelensky, Carpenter said, "then Ukraine would have concluded that this is how the U.S. does business, which is actually very similar to the way that Ukraine did business for many decades after its independence, through various corrupt favors that were done out of the public eye. It would have cemented that view that personal connections matter over public policy, and I think it would have dealt a huge blow to their fight against corruption."

Michael McFaul, who served as Barack Obama's ambassador to Russia from 2012 to 2014 (Vladimir Putin is not a fan), told Salon that if Trump's phone call had not been exposed, it could have made Ukraine vulnerable to attack from Russia.

"President Trump, unlike his administration, has signaled many times that he is indifferent at best towards defending Ukraine against Russia, and has shown a sustained proclivity to seek better relations with Putin," McFaul said. "So to withhold military assistance, the key deterrent for future Russian aggression in Ukraine, would be a green light that the United States no longer supports Ukraine in its fight against Russian aggression and occupation. We would have had, I think, disastrous consequences. … It signals that this is not a core foreign policy objective for President Trump."

These dimensions alone make Trump's smear against Biden into something a bit more serious than the normal run of GOP dirty tricks, even without accounting for impeachment. Republican smears of Democratic presidential candidates, to be sure, are nothing new: In 2004, the "Swift Boat" campaign made Sen. John Kerry, a Vietnam combat veteran, look like a coward when running against George W. Bush, who avoided the draft with a no-show stint in the Texas Air National Guard. Twelve years later, Trump and his allies — with a major assist from the media — made Hillary Clinton's emails look like a major scandal, even after the FBI declined to file any charges in the email case.

So Trump's smear campaign against ,Biden is part of that larger pattern and also feels like something new. Trump has become only the third president to be impeached, and will be the first who runs for re-election afterward. Whoever wins the election, the campaign will be shaped by that fact.

One key question: What will the Biden campaign do to make sure it doesn't go down in history alongside Kerry and Clinton?

A spokesperson for the Biden campaign, who asked not to be quoted by name, told Salon that "the first thing" is "to get backed up forcefully," meaning to repeatedly make the point that the accusations against Biden are false. "Whenever this comes up in reporting, it is now always described as debunked, discredited, something of that nature," he said. "You have to also go on offense, because in doing this, Trump committed an act of malfeasance that literally no American president ever has."

Ethan Porter, an assistant professor of media and public affairs at George Washington University, agreed that the mistakes of the Kerry and Clinton campaigns carry a lesson: Candidates and campaigns need "to realize that it's on them to correct the record," he said. "It doesn't mean that correcting the record is going to make people vote for them, right? Political persuasion is really hard. People's political beliefs are not set in stone, but they're not easy to move. But you've got to reject and rebut misinformation as aggressively and as often as possible."

Much of the confusion surrounding this issue is rooted in the modern history of Ukraine, a subject most Americans know nearly nothing about. Carpenter defended Biden's behavior, unsurprisingly, and argued that crucial context was missing from Trump's version of the story.

"The U.S. government became aware roughly in the spring of 2015, that things were not well with the effort to prosecute corruption" in Ukraine, Carpenter explained. "And there was this investigation by the U.K. into a Ukrainian energy company called Burisma, where Vice President Biden's son was on the board."

That investigation, as Carpenter pointed out, concerned activity at Burisma prior to the revolution that overthrew pro-Russian President Viktor Yanukovych in 2014. It seems likely, Carpenter said, that between 2010 and 2013 Burisma obtained natural gas exploration licenses in corrupt fashion, through insider connections. "The U.S. government, our ambassador in Kyiv and other State Department officials pressed very hard for Ukrainian officials to cooperate in that investigation," he said.

Viktor Shokin, the prosecutor dismissed at Biden's request, "was a concern" because his office was not cooperating with British investigators, Carpenter said, and because he wasn't pursuing cases "against some of the actors involved in shooting protesters and cracking down on the opposition and on civil society under the previous administration."

After additional corruption scandals broke, some of them being directly traceable to Shokin or his associates, Biden traveled to Ukraine in December 2015 with a message to deliver, Carpenter said: "Look, we cannot continue to spend U.S. taxpayer money to support Ukrainian reforms if your prosecutor general's office remains a den of corruption. You need to do thorough root-and-branch reform of this institution in order for us to be able to move forward with our assistance." Biden told the Ukrainians that a $1 billion loan guarantee arrangement would not be forthcoming until they implemented this reform. Shokin was fired several months later.

It wasn't just Obama, Biden and the Democrats who wanted to push Shokin out. A number of Republican senators — including Rob Portman of Ohio, Mark Kirk of Illinois and Ron Johnson of Wisconsin — wrote a letter in 2016 echoing the call for Shokin to be removed. Kurt Volker, who served as U.S. special representative for Ukraine until September, has described "a general assumption among the European Union, France, Germany, American diplomats [and the] U.K. that Shokin was not doing his job as a prosecutor general. He was not pursuing corruption cases."

Various international entities, including the International Monetary Fund, also pushed for Shokin to step down. Multiple witnesses at the House impeachment hearings, including former National Security Council official Fiona Hill, U.S. diplomat David Holmes, former U.S. ambassador to Ukraine Marie Yovanovitch and Deputy Assistant Secretary of State George Kent, have said that Biden's push to remove Shokin from his post was a matter of official policy and had nothing to do with Burisma or his son.

The Biden campaign also hopes to turn this whole mess to the candidate's advantage, offering it as proof that Trump is frightened of Biden, and was willing to commit a foolhardy and likely illegal act in order to short-circuit his campaign. Biden has consistently led national polls for the Democratic presidential nomination and in head-to-head polls against Trump (although Bernie Sanders has narrowed the gap of late). Biden also generally outperforms his Democratic rivals in swing-state polls, and even polls that depict Trump as relatively strong still tend to find him trailing Biden.

Trump's attacks, said the Biden campaign official, have been "very validating .… Joe Biden has always been extremely clear-eyed that the stakes in this are higher than they have been in generations because of what Donald Trump stands for. As soon as that news broke, it was instantly understood that Donald Trump did this because he's still afraid of Joe Biden."

This offered Biden "the opportunity to demonstrate how to beat Trump's craven playbook of gaslighting and diversion," the campaign official continued. "Even before this, Donald Trump had already become the most dishonest president in our history. But now he's literally the only American president who ever subverted our national security by trying to bully another country into lying about a political rival. He debased his office because he was desperate to bail out his re-election campaign, but his strategy backfired and displayed to the entire world who Trump knows he can't defeat."

Whether that's true is ultimately a matter for the voters, beginning this week in the Iowa caucuses. Whatever happens, Biden has already been the target of a smear campaign without precedent in American history, which has led to another unprecedented event — the impeachment of a president who is running for re-election. What the endgame will be for Joe Biden and Donald Trump is anyone's guess, but the future of our country hangs in the balance.