"Obamagate" and "Lock her up": Pointing the way toward "Heil Trump"

It’s not just a chant at Trump's rallies or lame wordplay in his tweets. It’s his call to fascist rule 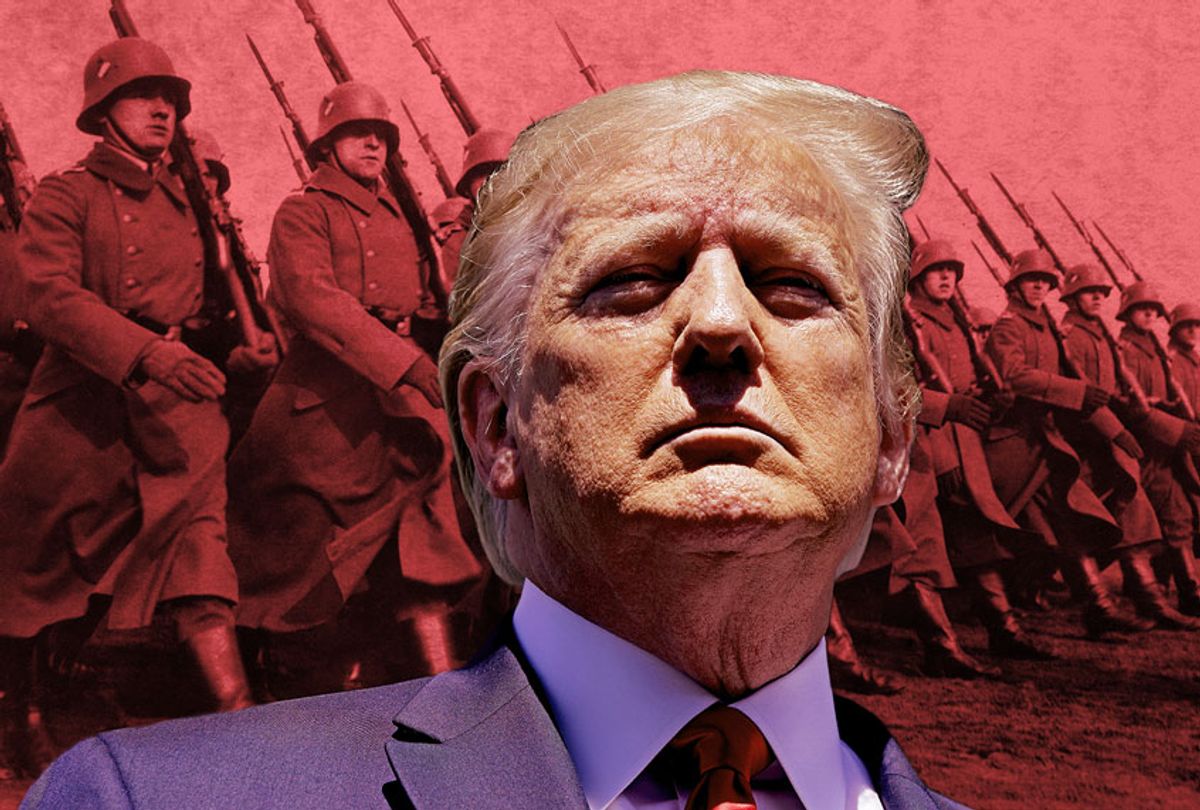 You know someone's in a real panic when they start running in circles, and that's what Donald Trump has been doing for the past week. He started off last Sunday with an epic tweetstorm, 126 of them in all, the third-highest total for one day in his presidency, according to FactBa.se, which keeps track of Trump's statements. "Obamagate!" he tweeted, following that one with "Because it was Obamagate, and he and Sleepy Joe led the charge. The most corrupt administration in history!"

That presaged by 24 hours his now-famous exchange with Philip Rucker of the Washington Post in the Rose Garden, when Rucker asked him, "What crime, exactly, are you accusing President Obama of committing?"

"Obamagate," Trump replied, refusing to define the "crime" or provide any specific evidence. So Rucker followed up: "What is the crime, exactly, that you're accusing him of?" Trump shot him what passed for an angry look: "You know what the crime is," Trump answered. "The crime is very obvious to everybody."

What was Obamagate, pundits asked each other with puzzled looks on their faces, as the week wore on? They should have known that it would have something to do with Michael Flynn, Trump's former national security adviser, who lasted all of 24 days in the job before being fired for lying to Vice President Mike Pence about his phone call with Russian ambassador Sergey Kislyak in late December of 2016. Flynn was later charged with lying to the FBI, pled guilty twice, and has been awaiting sentencing for more than two years. Trump's Department of Justice, under the direction of Large Lickspittle Bill Barr, moved to drop the charges against Flynn last week, which generated a letter signed by 2,000 former Justice Department officials denouncing the motion filed by Little Lickspittle Timothy Shea, the U.S. attorney for the District of Columbia. The judge in the case will hold hearings on the matter and has not yet issued a ruling.

There is a perfect symmetry to the involvement of Michael Flynn in Trump's latest attempt to deflect attention from his inept handling of the coronavirus crisis, which has caused the infections of more than 1.4 million Americans and the deaths of more than 87,000 nationwide. Flynn enjoyed a singular distinction during the transition between the Obama and Trump administrations, besides his coziness with Russian bankers and ambassadors. Obama gave Trump only one piece of personal advice during their private meeting in the White House after Trump was elected: Whatever you do, don't hire Michael Flynn. For anything. Ever.

But Trump loved Flynn. It had been Flynn who led the delegates at the 2016 Republican National Convention in chanting "lock her up" after mentioning the alleged criminal behavior of Hillary Clinton as secretary of state. As with Trump's use of "Obamagate" as a shorthand for Obama's alleged corruption while in office, Flynn's allegations against Clinton were equally vague and shorn of specificity. Trump had already been encouraging his crowds to chant "lock her up" at his campaign rallies in 2016, and has continued the practice ever since. I don't know of a single rally Trump has held since he's been in office when the crowd didn't break into the "lock her up" chant, with Trump allowing the fascist bellowing to wash over him as he stands at the podium, smiling with approval at the crowd.

I use the words "fascist bellowing" on purpose, because that's what it is: Trump supporters at public events and rallies loudly endorsing official lawlessness. It's not a funny joke or clever verbiage. Trump and his followers have been routinely advocating the jailing of Trump's political opponents without an investigation, criminal charges, trial or conviction by a jury of their peers. This is the way fascist dictators dispose of their political opposition. Putin has jailed opponents of his regime. He has also arrested wealthy businessmen whose enterprises he wanted to seize, and of course he has ordered the murder of Russian citizens who he felt betrayed him.

Trump himself circled back around to calling for the jailing of his political enemies for unspecified crimes on Thursday morning in an interview with Maria Bartiromo on the Fox Business Network. Trump called the "unmasking" of Flynn "the greatest political crime in the history of our country."

He continued: "If I were a Democrat instead of a Republican, I think everybody would have been in jail a long time ago … it is a disgrace what's happened. This is the greatest political scam, hoax in the history of our country." To set the record straight, that's ludicrous and untrue. Flynn's "unmasking" was a routine national security procedure during which officials in the Obama administration were given Flynn's name as the person who was caught on NSA wiretaps talking to Kislyak during the Trump transition, when Flynn was serving as an adviser to Trump on national security and international relations. Included among the Obama officials were Trump's bete noire, former FBI director James Comey, and Vice President Joe Biden.

Another fascist dictator who made use of extrajudicial imprisonment of political enemies was Adolf Hitler. He didn't bother with leading "Lock her up" chants at his rallies. He just locked up his political opponents and racial and ethnic and religious enemies in concentration camps where they were executed or perished from disease and starvation. His followers rewarded him at political rallies by chanting "Heil Hitler." It was the all-purpose approbation of Hitler's leadership of Nazi Germany, a mass public endorsement of everything he did, including locking up his political opponents. That's what "Lock her up" has become for Trump.

Trump's campaign people are already talking about holding rallies as Trump blackmails the states by pushing his "open up" madness. "Lock her up" chant doubles down on hatred for Hillary Clinton, or these days for Nancy Pelosi and Joe Biden, for those in love with Trump, by loudly calling for his political opponents to be imprisoned without trial for unspecified crimes. If you don't believe me, listen to the chant the next time he holds a rally. Trump's followers are both swearing allegiance and saluting him. "Lock her up" is Trump's "Heil Hitler."