Will Flynn be the right wing's Nelson Mandela? Of course that's insulting — but so is this entire presidency 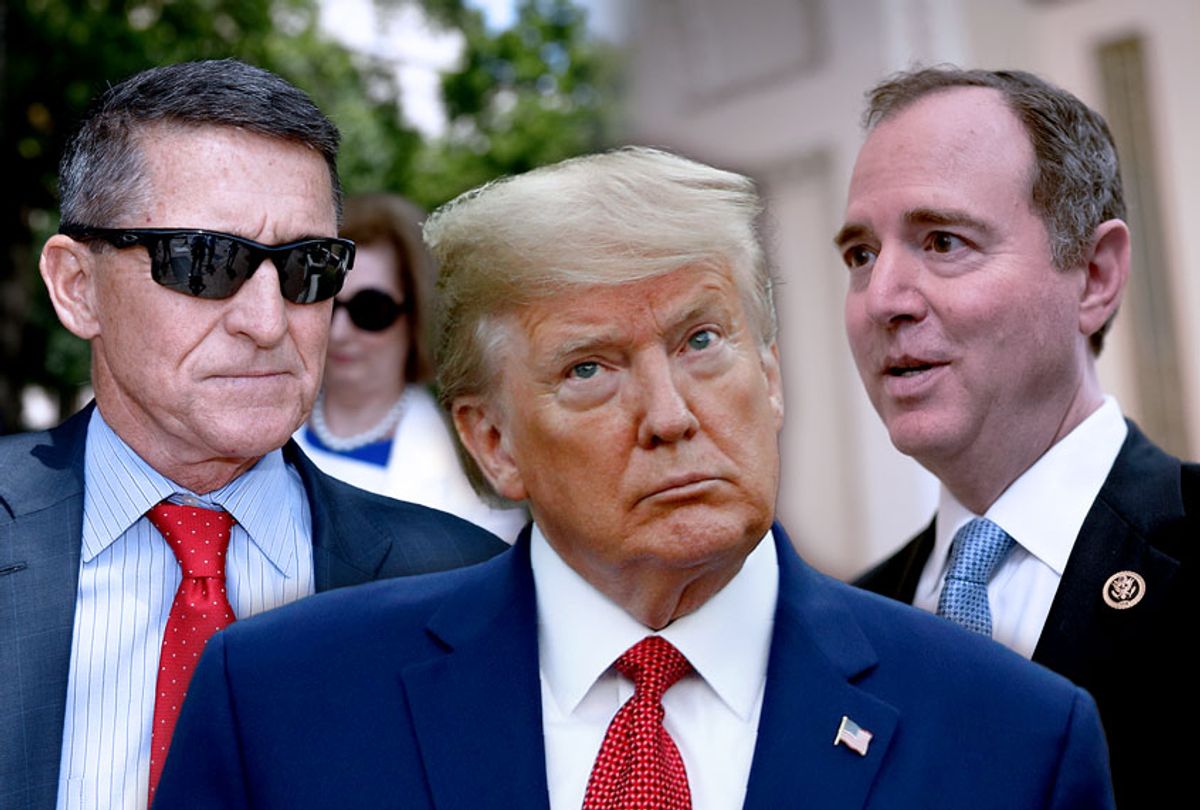 In this time of global pandemic and Great Depression economics, it seems almost quaint to think back just a few months and remember simpler days. Once upon a time, we were all consumed with the impeachment trial of the president of the United States, and worried about whether or not he had been bamboozled into betraying the nation to its cunning adversary, Vladimir Putin. It all seems so far away now as we face the daily onslaught of statistics showing Americans dying by the tens of thousands and 30 million people out of work.

But then, the Russia investigation and the Ukraine scandal were really just an earlier chapter of the same story — the Donald Trump magnum opus called "American Carnage." One atrocity leads inexorably into another.

On Thursday we witnessed another nail being pounded into the coffin of the Department of Justice as Attorney General Bill Barr's attempt to rewrite the conclusions of the Mueller report continues unabated. We still await the release of the "Durham report," which looks at this point to be a partisan hit job run out of the attorney general's office. But in the meantime, Barr and his accomplices decided to give the Trump cult a little red meat to tide them over by dropping their prosecution of former national security adviser Michael Flynn, the man who pleaded guilty to lying to the FBI.

It is not in the least surprising that Barr would be sympathetic to Flynn, even without President Trump's open proselytizing on his behalf. They are both immersed in the right-wing fever swamps at a level that makes them little more credible than your average MAGA Twitter bot.

Barr showed his true colors when he auditioned for the attorney general job by writing an unsolicited memo to the White House explaining why the Mueller investigation was illegitimate. Flynn famously let his wingnut flag fly at the Republican convention in 2016 when he led chants of "Lock her up." Later, he extolled the virtues of disgraced far-right provocateur Milo Yiannopoulos and spread conspiracy theories that accused Hillary Clinton of pedophilia.

When Flynn was first arrested he seemed to sober up and cooperated with federal prosecutors, offering them valuable information regarding his various nefarious and lucrative schemes with foreign governments. As a result, Mueller's team went remarkably easy on him, recommending probation.

The judge in the case was unimpressed, however, and told Flynn he had to try harder. Flynn's sentencing was delayed and in the interim, he returned to the Fox News bunker, fired his competent lawyers and replaced them with political hacks. This turned out to be a smart strategy after all. He will in all likelihood be able to make a great deal of money in the wingnut welfare racket after he becomes the Nelson Mandela of the Trump campaign.

That's not an exaggeration. The Daily Beast reports:

"Years ago when Nelson Mandela came to America after years of political persecution he was treated like a rock star by Americans," John McLaughlin, one of President Trump's chief pollsters, told The Daily Beast on Thursday evening. "Now after over three years of political persecution General Flynn is our rock star. A big difference is that he was persecuted in America."

Michael Flynn did not serve a day in jail. This move to drop the indictment is an unprecedented show of favoritism for an ally of the president of the United States. Mandela? Not exactly?

The New York Times quoted several legal scholars who were flabbergasted by this decision, all saying the legal rationale was absurd. Former federal prosecutor and New Jersey attorney general Ann Milgrim argued that the context of the decision is even more important: Barr's Justice Department was "undercutting the law enforcement officials and prosecutors who investigated the 2016 election and its aftermath," which she likened to "eating the Justice Department from the inside out."

Not one legal analyst or former prosecutor could think of a case in which someone had lied to the FBI and pleaded guilty twice to doing it, and then saw the charges withdrawn by the Justice Department. There are thousands of cases involving matters much less important where people are incarcerated right now, today. This "one standard" only applies to friends of Donald Trump.

And Barr knows it. Get a load of this smug comment to CBS News, revealing to all the world that this is nothing more than partisan combat:

Meanwhile on Capitol Hill, late on Thursday the House Intelligence Committee released 57 transcripts from the House Intelligence Committee's Russia investigation which had been languishing for months in the office of the director of national intelligence for months. The committee had rightly objected to the office handing over transcripts to the White House to redact however it saw fit, so were waiting for the ODNI to do the job properly. This week, acting director Richard Grenell started bizarrely throwing his weight around, saying in effect, "If you don't release the transcripts, I will" — despite the fact that his office was the one who'd been holding them back.

So now the right-wingers are screeching that Intelligence Committee chairman Adam Schiff, D-Calif., is panicking because he had to release these transcripts, when he was the one trying to get them released in the first place. If you didn't know better, you might think they were trying to make something out of nothing in order to keep the troops excited.

Most of what was in the transcripts was already known through earlier releases, leaks and evidence in the Mueller report. They show how disrespectful and frankly obnoxious the Trump witnesses were — a preview of how this administration has continuously held the Congress in total contempt. The interviews with Jared Kushner are particularly hard to take, showing the kind of arrogance and ineptitude that have now manifested in the deaths of many Americans after Kushner was once again handed a job for which he has no experience or ability.

These transcripts are for history now. The most important evidence remains what it's always been: The Russian government interfered in the 2016 election on behalf of Donald Trump, and he has tried to deny that and cover it up ever since.

And yet, even after everything he's been through, Trump has learned absolutely nothing. During a meeting in the oval office with Texas Gov. Greg Abbott on Thursday, Trump informed the press that he'd recently spoken with Putin. And you won't believe what Trump said he told the Russian leader:

I said, "You know, it's a very appropriate time, because things are falling out now and coming in line showing what a hoax this whole investigation was, it was a total disgrace, and I wouldn't be surprised if you see a lot of things happen over the next number of weeks. This is just one piece of a very dishonest puzzle."

He knows that Putin's government interfered in the election. We all do. And he's openly admitting in public that he informed Putin himself that he's planning to discredit the U.S. intelligence community's conclusions, and those of the Department of Justice, to that effect.

In the middle of our global catastrophe that almost seems trivial now. We have much bigger problems. But when all is said and done and we're able to sort through the wreckage of this catastrophic administration — assuming that day eventually comes — this will be remembered as the most astonishing betrayal by a president in American history.