Mainstream media still won't acknowledge the asymmetry: One side has arguments, but the other has the votes 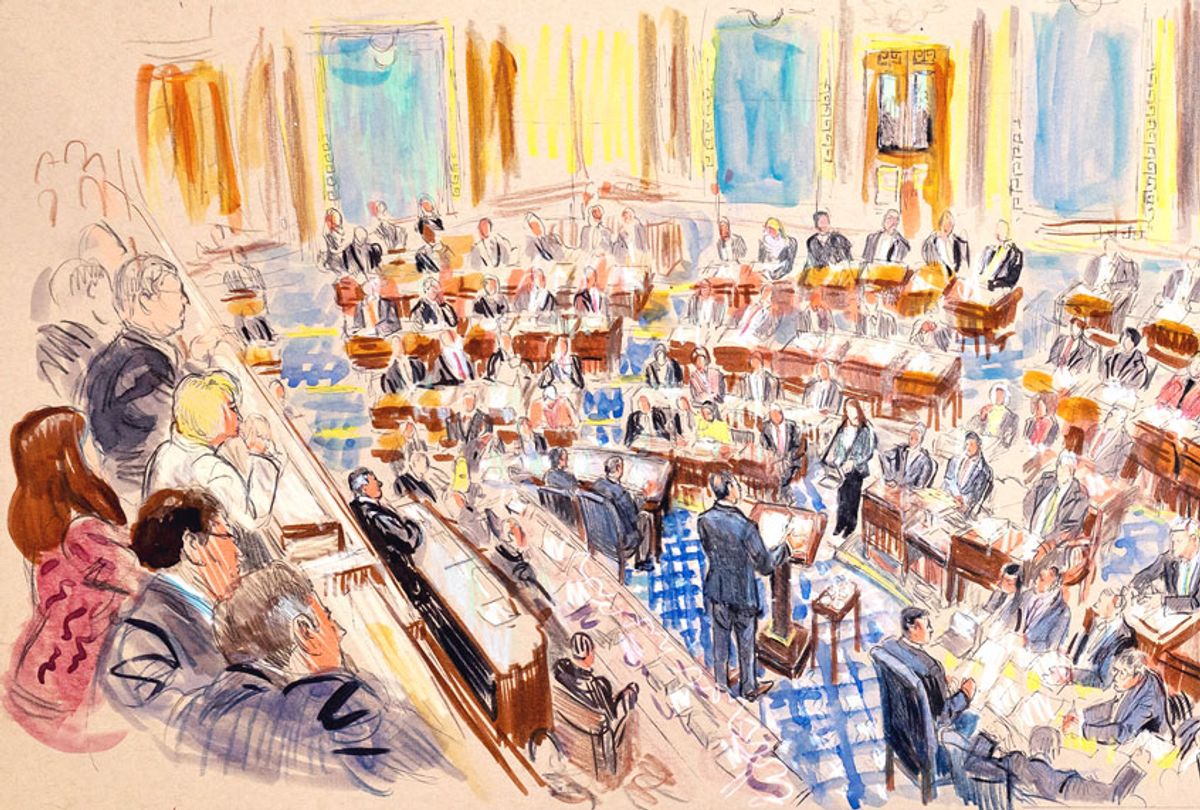 This artist sketch depicts White House counsel Pat Cipollone speaking in the Senate chamber during the impeachment trial against President Donald Trump on charges of abuse of power and obstruction of Congress, at the Capitol in Washington, Tuesday, Jan. 21, 2020. (Dana Verkouteren via AP)
--

The first real day of Donald Trump's impeachment trial in the U.S. Senate was an epic exercise in raw political power. The Trump team, effectively led by Mitch McConnell, put forth no plausible arguments to support their position. They didn't have to — because they had the votes.

But the media failed to tell that story.

If you were dependent on the coverage from our biggest and most influential media outlets, what you learned was mostly that there was a spirited debate and that McConnell made a concession.

That's just plain wrong. The debate wasn't spirited. It was wildly unbalanced, with Democrats making a substantial case for evidence-gathering, bolstered by facts, legal analysis, precedent and logic — and Republicans batting around Fox-News-style talking points that were devoid of reasoned thinking.

And McConnell's concession was, in the greater scheme of things, a minor one. He succeeded — effortlessly — in ramming through a procedure that almost guarantees the impeachment trial will not be encumbered by fact-finding.

This was a display of the overwhelming asymmetries that will continue during the rest of the so-called trial, with one side having the solid arguments and the other side having the votes. That was the big news.

But the Washington Post's big takeaway was that McConnell folded under pressure from within his caucus, by allowing each side to make 24 hours of arguments over three days, instead of two.

The morning paper's big headline was "GOP relents on tight trial rules." Seung Min Kim, Felicia Sonmez and Mike DeBonis called it a "deeply acrimonious day" and waited until the ninth paragraph to explain what the arguments were really about: the "Democratic efforts to subpoena documents and witnesses that they insisted would would be key in proving whether Trump abused the powers of the presidency when he asked Ukraine for political investigations."

This was then followed by two paragraphs from each side:

Earlier Tuesday, Rep. Adam B. Schiff (D-Calif.), the chairman of the House Intelligence Committee, told senators that the most important question confronting them was whether to accept a structure that Democrats said would not produce a fair trial as he argued for Trump's removal from office.

"If the House cannot call witnesses or introduce documents and evidence, it's not a fair trial," Schiff said. "It's not really a trial at all."

In response, the president's lead lawyers also pressed the issue of fairness, arguing that House Democrats had rushed through a process that deprived Trump of his due process rights and that Trump should not have been impeached at all.

The Post give each side equal credence, even though one of the Cipollone quotes was a flat-out lie. The opinion "that Trump should not have been impeached at all" is one to which the Republicans are certainly entitled; but "that House Democrats had rushed through a process that deprived Trump of his due process rights" is simply a lie.

It wasn't until the last two paragraphs of the story that the Post bothered to point out two of the most outrageous lies uttered by Trump's counsels.

The New York Times at least focused on the slightly bigger picture, under the print headline "GOP Blocks Bids to Add Evidence at Start of Trial." But Nicholas Fandos didn't put a premium on explaining what the fight was about or how imbalanced it was. He focused on the politics:

On its face, the prolonged debate was about the rules and procedures. But it set the stage for a broader political fight over Mr. Trump's likely acquittal and will help shape the 2020 campaign.

Democrats were laying the groundwork to argue that the trial was rigged on Mr. Trump's behalf and to denounce Republicans — including the most vulnerable senators seeking re-election — for acquiescing. Republicans, for their part, insisted that the Senate must move decisively to remedy what they characterized as an illegitimate impeachment inquiry unjustly tarring the presidency.

Way down in the story, Fandos lightly addressed the elephant in the room, as it were:

Democrats, who came armed with slick digital slides and video clips to drive home their arguments, spent hours detailing the factual record compiled by the House investigation and cataloging the witnesses and thousands of pages of highly relevant documents Mr. Trump had succeeded in withholding. Senators facing such a grave decision as removing a president, they argued, have a responsibility to try to push all the facts to light.

Mr. Trump's lawyers replayed many of his most frequent and personal grievances, accusing Democrats in only slightly more lawyerly terms of conducting a political search-and-destroy mission.

As usual, it was left to analysts and columnists to get to the heart of the matter.

In the impeachment trial of President Trump, the House Democrats — the prosecution — are mostly pounding the facts. The heart of their brief is a well-told narrative of Trump's efforts to muscle Ukraine into investigating Democratic rival Joe Biden, and then to cover up the details once the scheme was discovered.

Their central charge is that Trump abused the power of the presidency by asking a foreign government to help him win reelection. There's plenty of evidence on their side.

The president's defense lawyers, in contrast, are mostly pounding the law — their own theory of the law, that is.…

Instead, the core of Trump's argument is a novel interpretation of the law: Whatever the president did, it's not impeachable.….

It's no mystery why the president's lawyers are putting so much weight on the legal argument over what constitutes an impeachable offense. The facts don't look good.

And the New Yorker's Susan Glasser hit the nail on the head, writing that "the real news was what the lawyers for Trump finally had to say about the case."

Trump's lawyers … showed their hands, offering a defense of Trump that was very much like the President himself: loud, intemperate, personally nasty, ad hominem, factually challenged, and often not even bothering to have a tenuous connection to the case at all. When the White House counsel Pat Cipollone and Trump's personal attorney, Jay Sekulow, addressed the Senate, the volume went up in the chamber; the tone changed. As we watched from the press gallery, it was as if we had become the audience in an entirely different play. Why should there be no witnesses or documents produced in the trial? Listening to Cipollone and Sekulow, it was hard to tell.

Our top news organizations have been roundly criticized over the last decade for indulging in "false equivalence" rather that grasping and describing the fundamental and ever-growing asymmetry between the two parties, particularly when it comes to acknowledging reality.

When asymmetry is no longer an element of the news story but the story itself, they are truly flummoxed.