Barrett is more than a pious culture warrior who openly defies the pope. She's an abject servant of corporate power 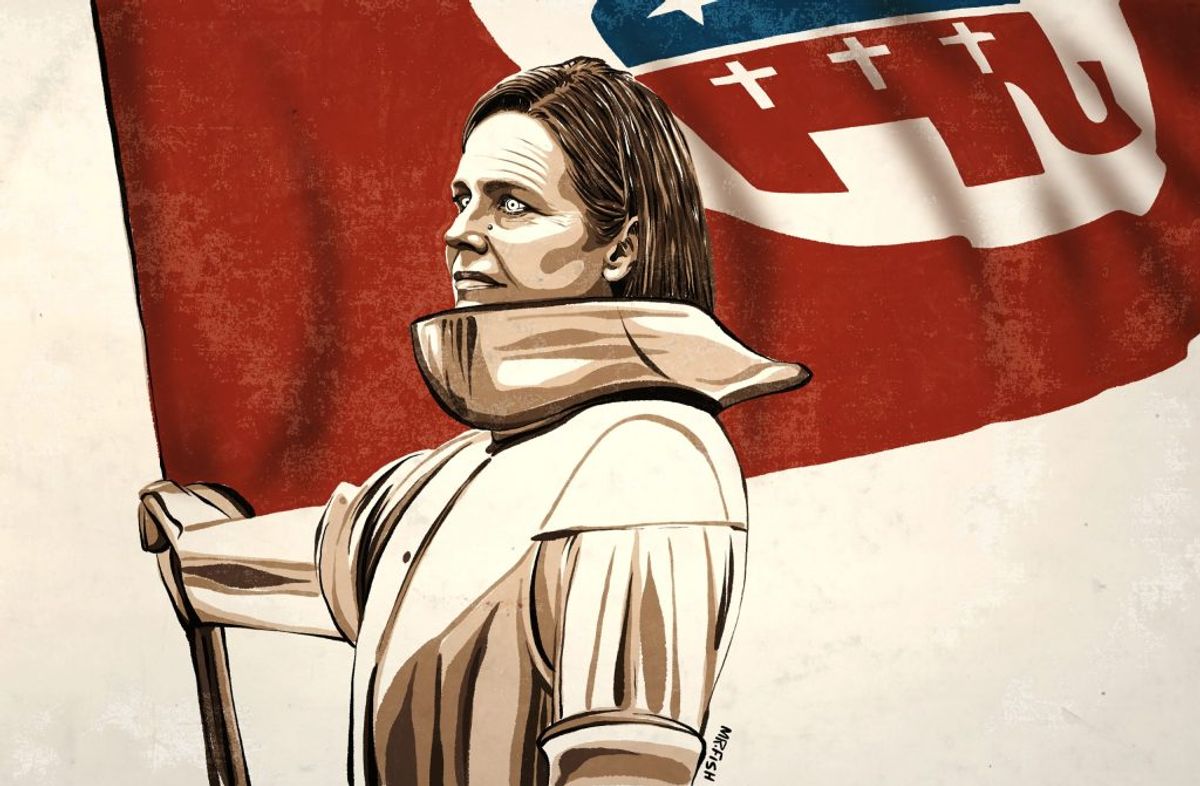 The Christian right is content to have the focus on Supreme Court nominee Amy Coney Barrett revolve around her opposition to abortion and membership in People of Praise, a far-right Catholic cult that practices "speaking in tongues." What it does not want examined is her abject subservience to corporate power, her hostility to workers, civil liberties, unions and environmental regulations. And since the Democratic Party is beholden to the same donor class as the Republican Party, and since the media long ago substituted the culture wars for politics, the most ominous threat Barrett's appointment to the court represents is going unmentioned.

All fascist and totalitarian movements paper over their squalid belief systems with the veneer of morality. They mouth pieties about restoring law and order, right and wrong, the sanctity of life, civic and family virtues, patriotism and tradition to mask their dismantling of the open society and silencing and persecution of those who oppose them. This is the real game being played by Christian fascists, who since the early 1970s have been building institutions with tens of millions in corporate donations to take power. Donald Trump, who has no ideology, has allowed the Christian right to fill his ideological void. He is the useful idiot. And the Christian right, awash in money from corporations that know their real political intent, will mobilize in this election to use any tool, no matter how devious, from right-wing armed militias to the invalidation of ballots, to block Joe Biden and Democratic candidates from assuming office. The road to despotism is always paved with righteousness. This was as true for Soviet communism as it was for German fascism. And it is true in the United States.

Capitalism, driven by the twin obsessions of maximizing profit and reducing the cost of production by slashing workers' rights and wages, is antithetical to the Christian Gospel, as well as the Enlightenment ethic defined by Immanuel Kant. But capitalism, in the hands of the Christian fascists, has become sacralized in the form of the Prosperity Gospel, the belief that Jesus came to minister to our material needs, blessing believers with wealth and power. The Prosperity Gospel delights the corporations that have carried out the slow-motion corporate coup. This is why large corporations such as Tyson Foods, which places Christian right chaplains in its plants, Purdue, Walmart, and Sam's Warehouse, along with many other corporations, pour money into the movement and its institutions such as Liberty University and Patrick Henry Law School. This is why corporations have given millions to groups such as the Judicial Crisis Network and the U.S. Chamber of Commerce to campaign for Barrett's appointment to the court. Barrett has ruled consistently in favor of corporations to cheat gig workers out of overtime, greenlight fossil fuel extraction and pollution and strip consumers of protection from corporate fraud. The watchdog group Accountable.US found that as a circuit court judge, Barrett "faced at least 55 cases in which citizens took on corporate entities in front of her court and 76% of the time she sided with the corporations."

Her version of Catholicism is at odds with most of the positions championed by Pope Francis and traditional Catholic teaching on women's rights, voting rights, immigrants' rights, health care and environmental protections. The pope calls on the downtrodden to change the world economic order and denounces what he terms a "new colonialism" imposed by "the anonymous influence of mammon: corporations, loan agencies, certain 'free trade' treaties, and the imposition of measures of 'austerity' which always tighten the belt of workers and the poor." He speaks of the "sacred rights" of labor, lodging and land. He says the unfettered pursuit of money is "the dung of the devil" and castigates industrial nations for exploiting the raw materials and labor of the developing world.

Pope Francis has repeatedly warned that time is running out to save the planet from perhaps irreversible harm to the ecosystem. "Let us not be afraid to say it: We want change, real change, structural change," the pope has stated, decrying a system that "has imposed the mentality of profit at any price, with no concern for social exclusion or the destruction of nature."

Barrett's religiosity, like that of other Christian fascists, is in the service of almost everything the pope condemns.

These corporations don't give a damn about abortion, gun rights or the sanctity of marriage between a man and a woman. But like the German industrialists who backed the Nazi Party, they know that the Christian right will give an ideological veneer to ruthless corporate tyranny. These corporations view the Christian fascists the same way the German industrialists viewed the Nazis, as buffoons. They are aware that the Christian fascists will trash what is left of our anemic democracy and the natural ecosystem. But they also know they will make huge profits in the process and the rights of workers and citizens will be ruthlessly suppressed.

If you are poor, if you lack proper medical care, if you are paid substandard wages, if you are trapped in the lower class, if you are a victim of police violence, this is because, according to this ideology, you are not a good Christian and not blessed by God. In this belief system you deserve what you get. There is nothing wrong, these homegrown fascists preach, with the structures or systems of power. It is the mantra of self-help that made gurus like Oprah and Tony Robbins rich dressed up as the voice of God.

The Christian fascists, allied with organization such as the Federalist Society, have appointed two Supreme Court justices — Neil Gorsuch and Brett Kavanaugh — as well as nearly 200 other judges with lifetime appointments to lower federal courts during the Trump administration. They claim to be strict "originalists." Originalists argue that the meaning of the constitutional text is fixed and immune to interpretation. Originalists denounce jurists who argue that constitutional law should respond to changing circumstances and values. The Originalists already have five Federalist Society Supreme Court justices. Barrett would be the sixth. (Two of them, Clarence Thomas and the late Antonin Scalia, were supported in the nomination process by Joe Biden.)

The legal calculus for the Christian right no longer revolves around the concept of universal human rights but around the tenets of "Bible-believing Christians" who supposedly authored the Constitution. Huge segments of the population are stripped of moral worth and legal protection. This process is incremental and often unseen. As the Nazi propagandist Joseph Goebbels understood: "The best propaganda is that which, as it were, works invisibly, penetrates the whole of life without the public having any knowledge of the propagandistic initiative."

Victor Klemperer, who was dismissed from his post as a professor of Romance languages at the University of Dresden in 1935 because of his Jewish ancestry, astutely noted how at first the Nazis "changed the values, the frequency of words, [and] made them into common property, words that had previously been used by individuals or tiny troupes. They confiscated words for the party, saturated words and phrases and sentence forms with their poison. They made language serve their terrible system. They conquered words and made them into their strongest advertising tools [Werebemittle], at once the most public and most secret." And, Klemperer noted, as the redefinition of old concepts took place the public was oblivious.

The Christian fascists, like all fascist movements, seek to create their own truth. It discredits verifiable fact, science, law and rationality. It promises a new, glorious world of moral renewal and prosperity. It promises a creator who will carry out miracles for believers and for America. It calls on followers to abandon the world of cause and effect and replace it with a world of magic. The reality-based world, as in all totalitarian movements, is snuffed out.

The Trump administration has implanted Christian fascists in senior positions of government, including Mike Pence to the vice presidency, Mike Pompeo to secretary of state, Betsy DeVos to secretary of education, Ben Carson to secretary of housing and urban development, William Barr to attorney general, Gorsuch and Kavanaugh to the Supreme Court and televangelist Paula White to Trump's Faith and Opportunities Initiative. Trump gave the Christian right veto and appointment power over key positions in government, especially in the federal courts. Almost all the judges he has appointed were selected by the Federalist Society and the Christian right. Many of the extremists among his judicial appointees have been rated as unqualified by the American Bar Association, the country's largest nonpartisan coalition of lawyers.

Trump has embraced the Islamophobia of the Christian right to ban Muslim immigrants and roll back civil rights legislation. He has made war on reproductive rights by restricting abortion and defunding Planned Parenthood. He has degraded LGBTQ rights. He has allocated federal money to Christian charter schools. He has ripped down the firewall between church and state by revoking the Johnson Amendment, which prohibits churches, which are tax-exempt, from endorsing political candidates. His Christian right appointees, including Pence, DeVos and Pompeo, regularly use biblical strictures to justify an array of policy decisions including environmental deregulation, war, tax cuts and the replacement of public schools with charter schools, an action that permits the transfer of federal education funds to private "Christian" schools.

Chris Hedges is the former Middle East bureau chief of the New York Times, a Pulitzer Prize winner, and a columnist at Scheerpost. He is the author of several books, including "America: The Farewell Tour," "American Fascists: The Christian Right and the War on America" and "War Is a Force That Gives Us Meaning."