Two years after Jamal Khashoggi’s murder, why is America still an accomplice to Saudi crimes?

Khashoggi's state-sponsored killing shocked the world. But the U.S. has done nothing to halt Saudi brutality 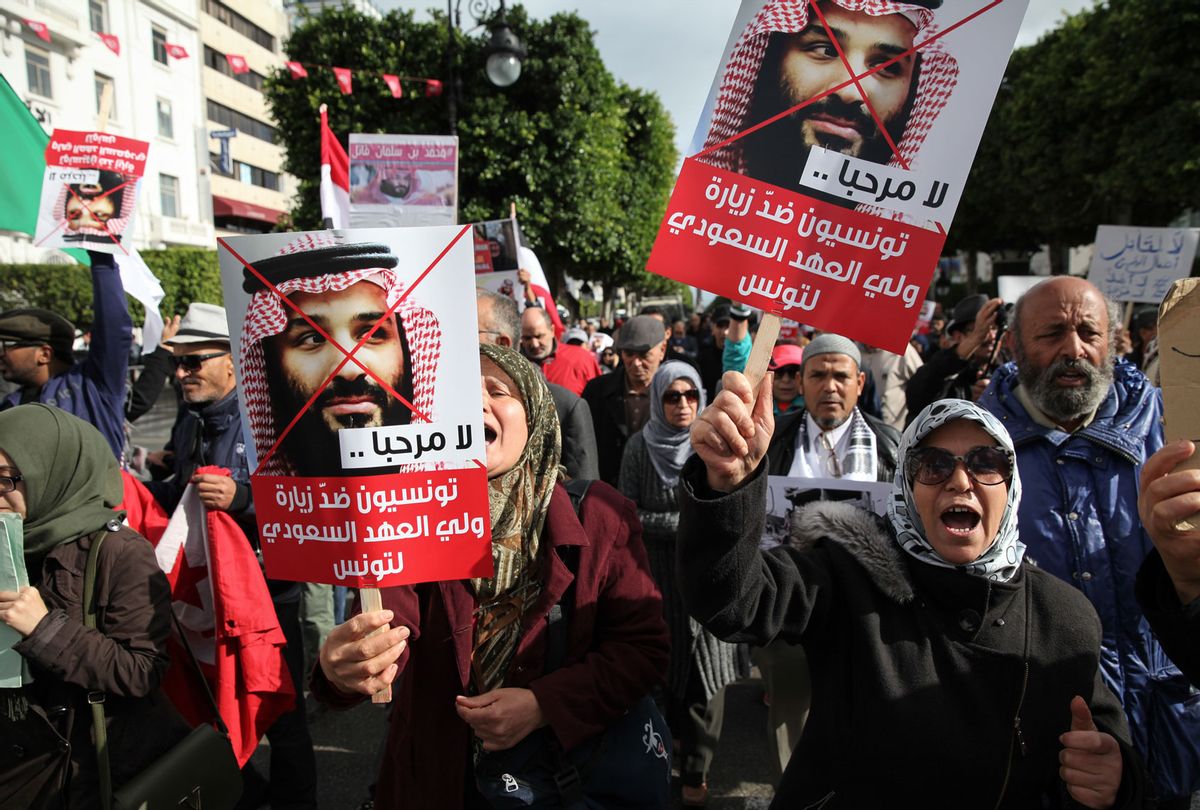 Washington Post journalist Jamal Khashoggi was brutally murdered on Oct. 2, 2018 by agents of Saudi Arabia's despotic government, and the CIA concluded they killed him on direct orders from Saudi Crown Prince Mohammed bin Salman (MBS). Eight Saudi men have been convicted of Khashoggi's murder by a Saudi court, in what the Washington Post characterized as sham trials with no transparency. The higher-ups who ordered the murder, including MBS, continue to escape responsibility.

Khashoggi's assassination and dismemberment was so horrific and cold-blooded that it sparked worldwide public outrage. President Trump, however, stood by MBS, bragging to journalist Bob Woodward that he saved the prince's "ass" and got "Congress to leave him alone."

MBS's ascent to dictatorial power, soon after his elderly father King Salman became king in January 2015, was sold to the world as ushering in a new era of reform, but has in reality been characterized by violent, ruthless repression. The number of executions has doubled, from 423 executions between 2009 and 2014 to more than 800 since January 2015.

They include the mass execution of 37 people on April 23, 2019, mostly for taking part in peaceful Arab Spring protests in 2011-12. These protests took place in Shiite areas where people face systemic discrimination in the majority Sunni kingdom. At least three of those executed were minors when they were sentenced, and one was a student arrested at the airport on his way to attend Western Michigan University. Many of the victims' families have said that they were convicted based on forced confessions extracted by torture, and two victims' beheaded corpses were put on public display.

Under MBS, all dissent has been crushed. In the last two years, all of Saudi Arabia's independent human rights defenders have been imprisoned, threatened into silence, or have fled the country. This includes women's rights activists such as Loujain al-Hathoul, who opposed the ban on women drivers. Despite some openings for women under MBS, including the right to drive, Saudi women remain subject to discrimination in law and practice, with laws that ensure they are subordinate citizens to men, particularly in relation to family matters such as marriage, divorce, child custody and inheritance.

The Trump administration has never challenged Saudi Arabia's internal repression, and worse yet has played a vital role in the brutal Saudi-led war on neighboring Yemen. After Yemeni president Abdrabbuh Mansur Hadi failed to leave office at the end of his two-year term as the head of a transitional government, or to fulfill his mandate to draw up a new constitution and hold a new election, the Houthi rebel movement invaded the capital, Sanaa, in 2014, placed him under house arrest and demanded that he do his job.

Hadi instead resigned, fled to Saudi Arabia and conspired with MBS and the Saudis to launch a war to try to restore him to power. The U.S. has provided in-air refueling, intelligence and planning for Saudi and Emirati air strikes and has raked in over $100 billion in arms sales. While U.S. support for the Saudi war began under Barack Obama, Trump has provided unconditional support as the horrors of this war have shocked the entire world.

According to the Yemen Data Project, at least 30% of U.S.-supported airstrikes on Yemen have hit civilian targets, including hospitals, health clinics, schools, marketplaces, civilian infrastructure, and a particularly horrific airstrike on a school bus that killed 40 children and 11 adults.

After five years, this brutal war has succeeded only in wreaking mass devastation and chaos, with dozens of children dying every day from starvation, malnutrition and preventable diseases, all now compounded by the COVID-19 pandemic.

Belated congressional efforts to end U.S. support for the war, including the passage of a War Powers bill in March 2019 and a bill to suspend arms sales to Saudi Arabia in July 2019, have been vetoed when they reached President Trump's desk.

The U.S. alliance with the Saudis certainly predates Trump, going back to the discovery of oil in the 1930s. While its traditional role as an oil supplier is no longer vital to the U.S. economy, Saudi Arabia has become one of the largest purchasers of U.S. weapons, a major investor in U.S. businesses and an ally against Iran. After the failed U.S. wars in Afghanistan and Iraq, the U.S. began grooming Saudi Arabia to play a leading geopolitical and military role, alongside Israel, in a new U.S.-led alliance to counter the growing influence of Iran, Russia and China in the Middle East.

The war on Yemen was the first test of Saudi Arabia's role as a leading U.S. military ally, and it exposed both the practical and moral bankruptcy of this policy, unleashing another endless war and the world's worst humanitarian crisis in one of the poorest countries on Earth. MBS's assassination of Khashoggi came at a critical moment in the unraveling of this doomed strategy, laying bare the sheer insanity of basing America's Middle East policy for the 21st century on an alliance with a neo-feudal monarchy sustained by murder and repression.

Obama tried to change tack towards the end of his administration, putting a hold on the sale of munitions to Saudi Arabia and signing a nuclear deal with Iran. Trump reversed both these policies, and continued to treat Saudi Arabia as a critical ally, even as the world recoiled in horror at Khashoggi's assassination.

While Saudi abuses have not diminished the Trump administration's unconditional support, they have ignited global opposition. In an exciting new development, exiled Saudi activists have formed a political party, the National Assembly Party or NAAS, calling for democracy and respect for human rights in the kingdom. In its inaugural statement, the party laid out a vision for Saudi Arabia in which all citizens are equal under the law and a fully elected parliament has legislative and oversight powers over the state's executive institutions. The founding document was signed by several prominent Saudi activists in exile, including London-based professor Madawi al-Rasheed; Abdullah Alaoudh, a Saudi academic who is also the son of jailed Islamic scholar Salman al-Awda; and Shia activist Ahmed al-Mshikhs.

Another new initiative, timed for the second anniversary of Khashoggi's murder, is the launch of Democracy for the Arab World Now (DAWN), an organization conceived by Khashoggi several months before his murder. DAWN will promote democracy and support political exiles across the Middle East, in keeping with the vision of its martyred founder.

Progressive groups in the United States continue to oppose U.S. support for Saudi Arabia's Yemen war and to push USAID to restore direct humanitarian aid that has been slashed to Houthi-controlled parts of Yemen in 2020 in the midst of the pandemic. European activists have launched successful campaigns to stop weapons sales to Saudi Arabia in several countries.

These past two years have also seen activists organizing boycotts of Saudi events. Pre-COVID, when the kingdom opened up to musical extravaganzas, groups such as CODEPINK and Human Rights Foundation pressured entertainers like Nicki Minaj to cancel appearances. Minaj put out a statement saying, "It is important for me to make clear my support for the rights of women, the LGBTQ community and freedom of expression." Meghan MacLaren, the U.K.'s top woman golfer, withdrew from a lucrative new tournament in Saudi Arabia, citing reports by Amnesty International and saying she cannot take part in "sportwashing" Saudi human rights abuses.

A new group called Freedom Forward, which seeks to sever the U.S.-Saudi alliance, has focused on the upcoming G20 in Riyadh, which is taking place virtually in November, urging invitees to refuse to participate. The campaign has successfully lobbied the mayors of several major cities, including New York, Los Angeles, Paris and London, to boycott the event, along with notables invited to side events for women and global thinkers.

As we mark two years since Jamal Khashoggi's murder, we may also soon be marking the end of the Trump administration. While it is hard to take Joe Biden on his word that he would not sell more weapons to the Saudis and would make them "pay the price" for killing Khashoggi, it is good to hear a presidential candidate admit that there is "very little social redeeming value in the present government in Saudi Arabia" and call it a "pariah state." Perhaps with enough pressure from below, a new administration could start the process of disentangling the U.S. from the deadly embrace of the Saudi dictatorship.

But as long as U.S. leaders continue to coddle the Saudis, it's difficult not to ask who is more evil — the maniacal Saudi crown prince responsible for Khashoggi's murder and the slaughter of more than 100,000 Yemenis, or the mendacious Western governments and businesspeople who continue to support and profit from his crimes?