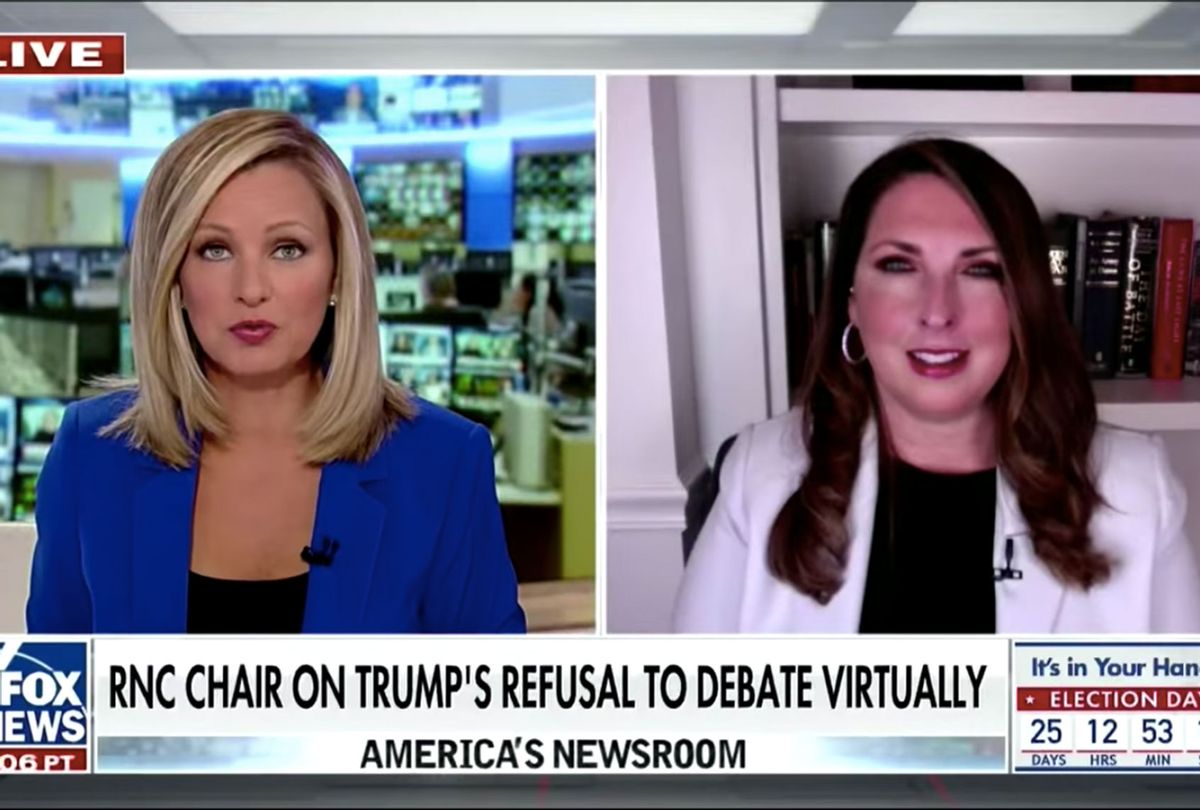 Republican National Committee Chairwoman Ronna Romney McDaniel suggested that her party could withhold participation from all future presidential debates if President Donald Trump is required to participate in a "virtual" event.

During an appearance on Fox News, McDaniel argued that the Commission on Presidential Debate is not following the "science" because she expects Trump to test negative for COVID-19 by the time of the event.

"You're not shedding live virus 10 days after diagnosis," McDaniel claimed. "So why are they changing the rules?"

"I will just tell you, I hope no future nominee of our party works with this commission," she continued. "They are a total joke and they hurting out democracy and they are impacting our election."

"They are affecting the election right now. People are not going to be able to see these candidates campaign or debate in person because of a commission that is inserting themself," McDaniel ranted.

Fox News host Sandra Smith interrupted: "The president did get sick with COVID-19 merely days ago. It would be important to know if the president has tested negative yet. Do we know anything on that front? The White House hasn't released that information."

"Well, the White House has been transparent," McDaniel claimed despite a coverup of Trump's last negative COVID-19 test. "Of course, the president would understand that but Joe Biden didn't even ask not to have in-person debates."

The RNC chair went on to suggest that the Commission on Presidential Debates is conspiring to let Biden "debate from home with his prompter and his aide."

"You're saying you can prove the president has had multiple negative tests," Smith pressed. "Just tell me what other information you would bring to the negotiating table to get this to be in-person."

McDaniel refused to "get ahead of the president" and declined to give a direct answer.

"I have real concerns about Joe Biden doing a virtual debate," she added. "We've seen the prompter showing up in his TV screen, you've seen him say move the prompter up. We deserve to have a debate between two candidates face to face."

"It will transform our nation forever," McDaniel warned.