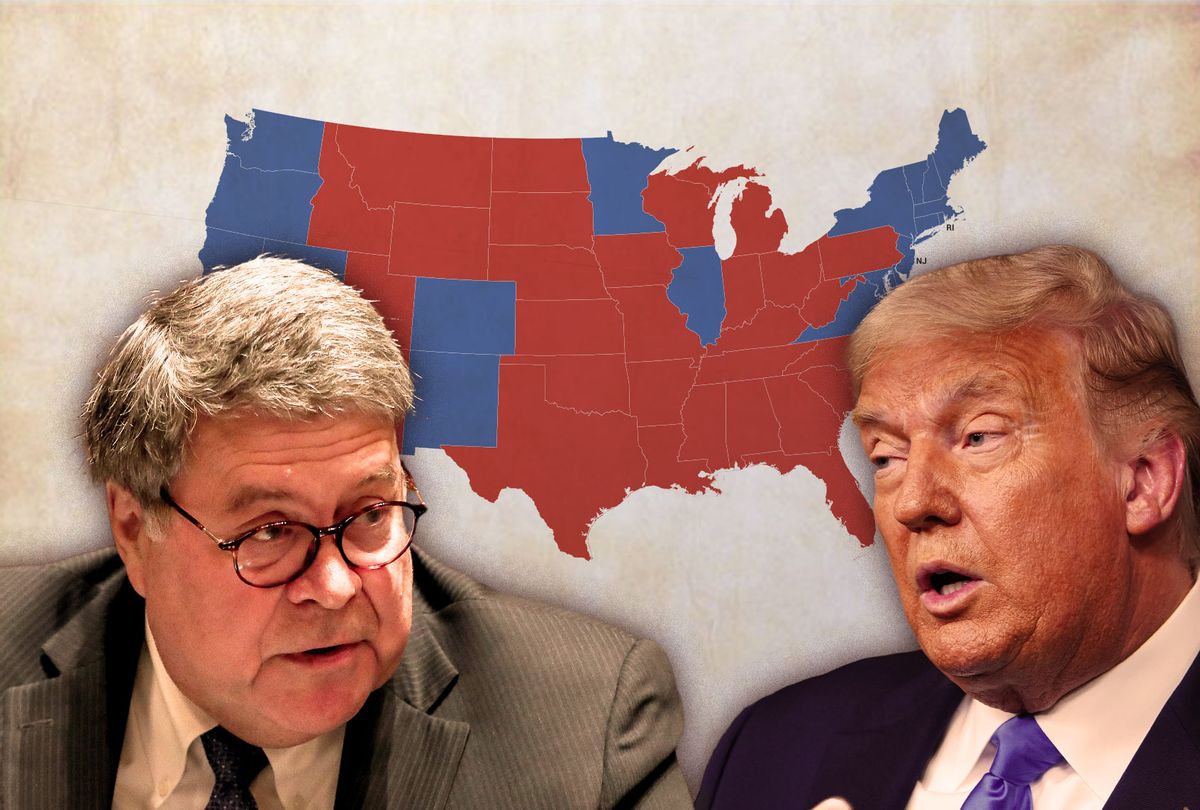 Bill Barr, Donald Trump and an electoral map of the USA (Photo illustration by Salon/Getty Images)
--

U.S. Attorney General William Barr, one of President Donald Trump's most aggressive loyalists in Washington, D.C., has joined the president in claiming that mail-in voting encourages voter fraud. Reporter Jerry Lambe, in an article published by Law & Crime on October 7, discusses some of the reactions that legal experts have had to Barr's comments — noting that some of them believe he is setting a troubling precedent by interfering in an election.

Citing reporting from ProPublica, Lambe explains that the U.S. Department of Justice has "advised U.S. attorneys' offices that a longstanding policy prohibiting the Department from interfering in U.S. elections will no longer preclude prosecutors who suspect election fraud from taking public investigative steps, even in the hours before polls close on November 3."

The DOJ's Public Integrity Section, according to Lambe, sent out an e-mail on Friday, October 2 announcing an "exception to the general non-interference policy" if a U.S. attorney suspects fraud involving postal workers or employees of the U.S. military. That exception, the e-mail said, applies to circumstances in which "the integrity of any component of the federal government is implicated by election offenses within the scope of the policy, including, but not limited, to misconduct by federal officials or employees administering an aspect of the voting process through the United States Postal Service, the Department of Defense or any other federal department or agency."

During an interview with the Chicago Tribune in September, Barr claimed that voting by mail would encourage the "business of selling and buying votes."

Barr's critics are arguing that it is wildly inappropriate for him to interfere in an election. Attorney Daniel Goldman, who advised House Democrats during the impeachment inquiries against Trump, tweeted, "Every DOJ prosecutor and agent must remember that they represent the United States of America, not Bill Barr or Donald Trump. There is no place in our system of justice for the DOJ to interfere in elections, which this policy change is designed to do."

Justin Levitt, a professor at Loyola Law School and a former deputy assistant attorney general in the DOJ's civil rights division, described Barr's actions as "profoundly counterproductive." And attorney Matthew Miller, a security analyst for MSNBC, slammed the exception as a "dangerous foreshadowing of what Barr has planned."