The week that Donald Trump lost the election 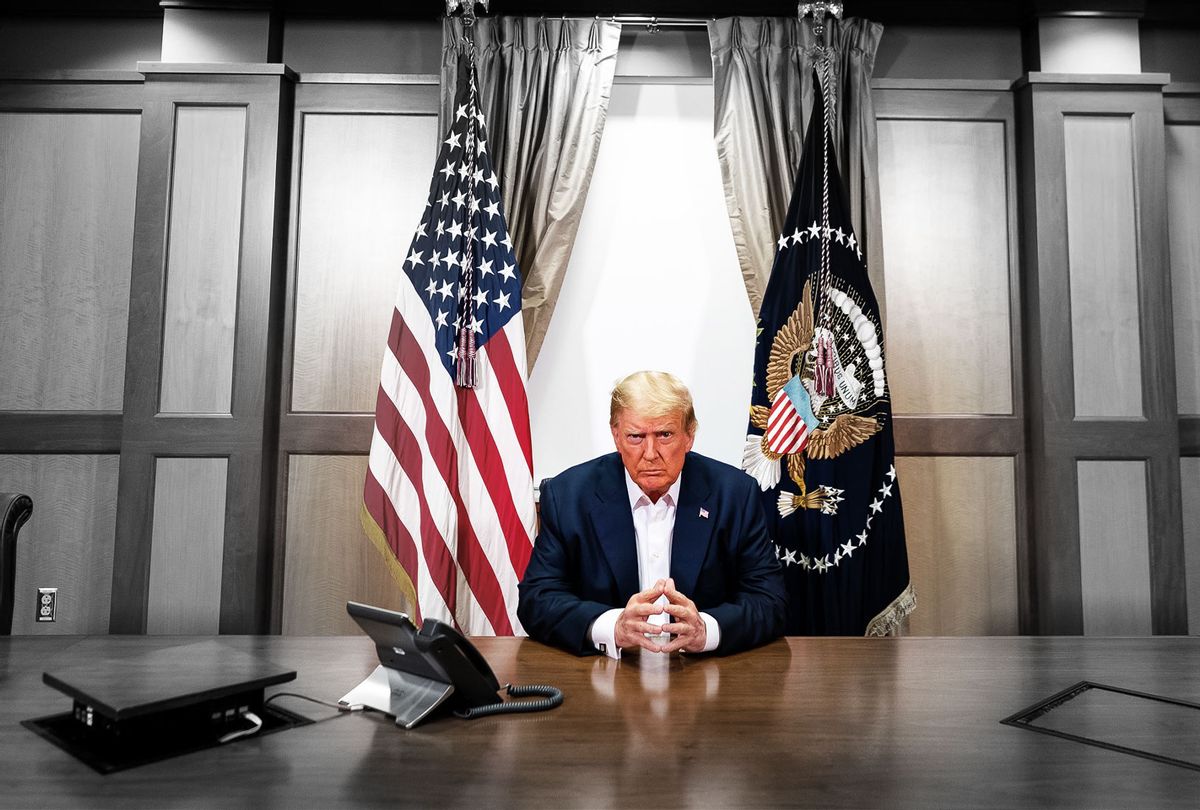 In this handout provided by The White House, President Donald Trump participates in a phone call with Vice President Mike Pence, Secretary of State Mike Pompeo, and Chairman of the Joint Chiefs of Staff Gen. Mark Milley in his conference room at Walter Reed National Military Medical Center on October 4, 2020 in Bethesda, Maryland. (Photo edit by Salon/The White House/Getty Images)
--

Trump was already down in the polls, both nationally and in many swing states, and after his unhinged performance in the debate with Joe Biden last week, his people knew he would lose more ground. Sure enough, two days later, an NBC/Wall Street Journal national poll had Biden up by 14 points, 53% to 39%, among registered voters. Biden's margin among women was 20 points last month; in the new poll, he led by 27, 60% to 33%.

A CNN poll conducted at the same time, and largely after Trump first tested positive for the COVID virus, had Biden up over Trump by 16 points, 57% to 41%. Women in the CNN poll, who a month ago favored Biden by 20 points, now favored him by 34 points, 66% to 32%.

By last weekend, Trump was tanking in the polls, he was sick with COVID and he was in the hospital. So what did he do? Almost immediately after leaving Walter Reed Medical Center and making his mock-Mussolini triumphant return to the White House, he tweeted an end to any possible new stimulus package for COVID relief, calling off negotiations with Democrats.

There are more than 213,000 dead from the virus, new coronavirus cases are averaging 45,000 a day over the last week, and there were 53,000 new cases on Thursday alone. According to National Geographic, "the virus is spreading uncontrollably" in the Midwest, new cases are up in 15 states, and "deaths are still hovering around 900 to 1000 a day."

Schools are shutting down in some places after reopening in August and September, some cities are closing bars and restaurants, and there were 840,000 new claims for unemployment last week.

This is the COVID election, folks.

But Trump has treated the virus with disdain and "played it down" from the beginning. First, he denied it was a problem at all and tried to wish it away. On Feb. 26, he said, "When you have 15 people, and the 15 within a couple of days is going to be down to close to zero, that's a pretty good job we've done." Thirty-four times, Trump has said the virus was going to "go away" or "disappear." He and members of his administration, including Vice President Mike Pence, outright refused to wear masks to protect themselves and others around them, most recently at the infamous "super-spreader" Rose Garden announcement of Amy Coney Barrett's nomination to the Supreme Court. His own family flouted the mask rule at the debate with Joe Biden.

Now, with more than 30 people in his own White House testing positive for COVID, including himself, Trump is trying to play down the virus's ability to kill.

In a bizarre video made at the White House just after his release from Walter Reed, Trump told people "don't be afraid" of the virus, and "don't let it dominate you." It was pure, unadulterated macho posturing and angry denialism, an obsession with appearance over reality, a version of "strength" in quotes that he seems to have absorbed from Cold War era dictators and Lone Ranger-style go-your-own-way westerns. You have the feeling that every day he wakes up and sees himself as George C. Scott in "Patton," standing alone in front of a gigantic American flag, growling a bunch of macho nonsense.

But think about it: He had a perfect opportunity to pivot and put himself on a course to win this election going away. Instead of standing on the balcony of the White House and saluting God-only-knows-what, Trump could have used the occasion of his COVID infection to change his tone. and, He could have kept his mask on and made a short video in which he told his fellow Americans, OK. I get it. I caught the virus, and it's a really bad thing, and here's what we can do together to put this thing away for good.

Instead of goading his base to follow him over a cliff, he could have sought out and doubtlessly received their sympathy and support. He could have looked into the eye of the camera and said that getting sick with the virus has made him understand how tough it's been on everyone. I realize that I've had the privilege of the best health care in America at Walter Reed, treatments that are not normally available. And for that reason, from now on, we're going to cover COVID for everyone. All testing for the virus will be free, and the federal government will cover 100 percent of the cost of treating everyone who comes down with the virus. Vaccines, when available, will be given for free, and every new drug developed to treat the virus will be provided to patients for free.

Then he could have announced that he was going to pick up the phone and make a deal for $3 trillion to help his fellow Americans cope with the fallout from the virus. He could have agreed to restart supplemental unemployment payments, provide help to state and local governments to make up for reduced tax revenues, send out new checks to every taxpayer for another $1,200, include help for the airlines, provide tax relief and send cash to small business owners to get them through the next few months until a vaccine can begin to reopen normal business for everyone. He could even have included a couple hundred billion specifically ear-marked for child care to make a direct appeal to the women whose support he has sand-blasted away from himself every time he opens his mouth.

Sure, it would have blown up the deficit, but it's not his money, and the deficit has already been exploded not once but twice, with his only-for-the zillionaires tax cut and the last stimulus bill. Republicans facing re-election battles at least as tough as Trump's, or worse, would have embraced his Big Giveaway with open arms. It would have been like dropping trillions of dollars into the campaign chest of the Republican Party. Democrats, who have already passed a $2.2 trillion bill in the House, would have been forced to go along with it. Trump could have put his name on the whole thing, and Biden would have been left to endorse a plan he knew would benefit his opponent far more than himself and his fellow Democrats.

That's the way Trump could have turned his illness into his October surprise. Instead of running from reality, he could have embraced it. He could have confronted the virus he has lied about for nine months and transformed a hit on himself into help for everyone else.

Instead, he's troweling on the pancake makeup and telling lies about how long he's had the virus and how many more White House staffers have tested positive, and now he's refusing to debate Joe Biden in front of 80 million voters he absolutely needs to pull himself out of the hole he's dug. With only three weeks to go, this is the one we'll look back on as the week Donald Trump lost the election.