"A shameless stunt": Inside Trump's push to use government funds to save his campaign 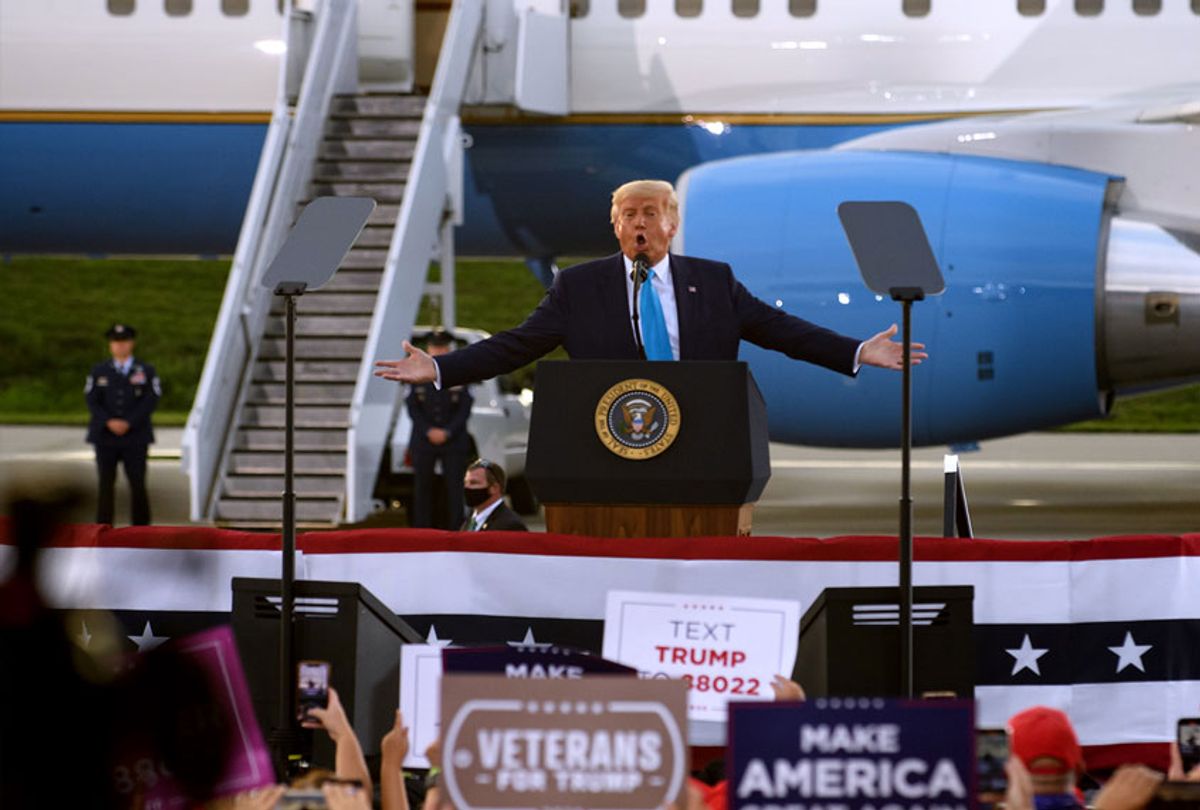 President Donald Trump speaks to supporters at a campaign rally at Arnold Palmer Regional Airport on September 3, 2020 in Latrobe, Pennsylvania. Trump won Pennsylvania in the 2016 election by a narrow margin. (Jeff Swensen/Getty Images)
--

If President Donald Trump loses to former Vice President Joe Biden in this year's presidential election, two of the main reasons are likely to be his response to his COVID-19 pandemic and his health care policy — specifically, Trump's push to eliminate the Affordable Care Act and its protections for people with preexisting conditions. One desperate move that Trump is making in the hope of saving his campaign is promising senior citizens drug discount cards, and Politico's Dan Diamond is reporting that Trump wants them to be available before November 3.

Caught by surprise by President Donald Trump's promise to deliver drug-discount cards to seniors, health officials are scrambling to get the nearly $8 billion plan done by Election Day, according to five officials and draft documents obtained by Politico. The taxpayer-funded plan, which was only announced two weeks ago and is being justified inside the White House and the Health Department as a test of the Medicare program, is being driven by Centers for Medicare and Medicaid Services Administrator Seema Verma and White House Chief of Staff Mark Meadows, the officials said.

The $200 cards, Diamond notes, "would resemble credit cards" and "would need to be used at pharmacies" — and they "would be paid for by tapping Medicare's trust fund."

Politico has obtained a copy of a draft proposal for the plan that has been circulated in the White House, and according to the proposal, "The goal is to begin the test by distributing cards starting in October 2020."

Trump's idea for drug discount cards for seniors comes at a time when many polls are showing his support among seniors falling. And Rep. Frank Pallone, the Democrat who chairs the House Energy and Commerce Committee, isn't the least bit impressed by the proposal. Pallone told Politico, "It's a shameless stunt that steals billions from Medicare in order to fund a legally dubious scheme that's clearly intended to benefit President Trump's campaign right before Election Day."

An official for the Department of Health and Human Services, quoted anonymously, told Politico, "It's turning into this last-minute, thrown-together thing." And another HHS official interviewed by Politico said, "This is a solution in search of a problem and a bald play for votes in the form of money in pockets."

Stacie Dusetzina, a professor at Vanderbilt University who has studied Medicare's drug program, went over the draft proposal — and Dusetzina told Politico, "There are a lot of things that seem problematic. It's an incredibly large amount of money to be spending, (and) it's not really solving any systemic problem."

Twitter has had plenty of reactions to Diamond's article and Trump's drug card proposal. Juliette Cubanski, deputy director of the Program on Medicare Policy, tweeted, "A lot of people with Medicare might appreciate receiving a $200 drug discount card, but this doesn't do anything to address the persistent problem of rising drug prices. And for those taking expensive drugs who struggle to pay their monthly copays, $200 won't go very far."

Twitter user @ColorFiend wrote, "Trump is bribing seniors to vote for him, while Therese Walsh (editorial director of Writer Unboxed), posted, "Too bad he kneecapped usps, huh?" — a reference to problems in the United States Postal Service that have occurred under Trump's postmaster general, Louis DeJoy. And another Twitter user, Gordon G. Forbes, wrote, "Any voter that can be bought for $200 is a cheap date, or an easy mark. But Trump knows his base."