Our national dialogue on monuments is important: The Mellon Foundation will spend $250 million to drive it forward 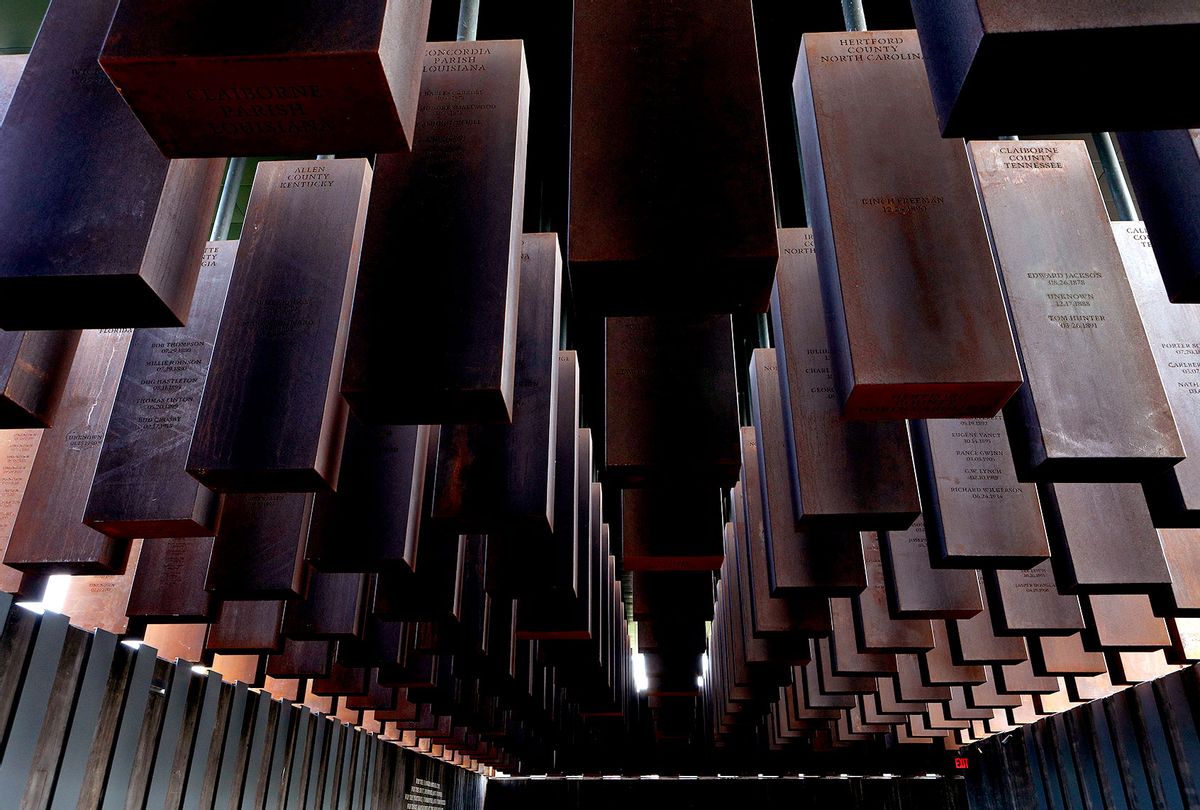 Over 800 corten-steel monuments, one for each county in the United States where a racial terror lynching took place with the names of the lynching victims engraved on the columns are on display at The National Memorial For Peace And Justice, the nations first memorial dedicated to the legacy of enslaved black people and people terrorized by lynching in Montgomery, Alabama on July 6, 2018. (Raymond Boyd/Getty Images)
--

Imagine a map that commemorates the powerfully complex history of the United States. Vast and strikingly beautiful, the map would reveal the intricate detail created by a cartography of many different voices and stories.

In Montgomery, Alabama, there are the 800 steel columns of the National Memorial for Peace and Justice — each one a remembrance of thousands of victims of racial terror, each one tall and still in their witness. In another region is the Great Wall of Los Angeles, its murals' vivid colors conveying the stories of Mexican farmworkers, Chinese laborers, and Dust Bowl refugees with equal vigor, the stories running on and on down the wall of a flood control channel that leads towards the Pacific.

The map would mark a memorial in the High Sierra that tells the story of the more than 11,000 Japanese-Americans who were interned in the camp at Manzanar during World War II, and the many who died there. To the east, a statue of the soldier Harriet Tubman, who led so many enslaved people to freedom, surveys the streets of Harlem with a steady gaze. Up high, toward the top of the map, Plains Indian Spirit Warriors ride across Montana's Little Big Horn in a powerful pictograph sculpture.

These commemorative reference points exist already, but the reality of this imagined map today includes only faint marks for the majority of our fiercest trailblazers — some of them people who lived otherwise regular lives, some of them lifelong leaders of astounding movements to realize the promise of liberty and justice for all — and all of whom, taken together, make the history of the United States so extraordinary. At the same time, too many in our country have been taught for too long with a warped atlas that charts a few members of our society as superior, and distorts or erases others as subhuman.

The National Historic Register, for example, lists vanishingly few properties explicitly associated with African-American history, Latinx history or Asian-American history. The indigenous people who first walked this land are profoundly underrepresented within it. Acts of violence and war are disproportionately exalted across the country, while the bulk of our history and its brilliant actors are nowhere to be found in the public places where we are constantly taught who we are and what we value.

Statues are not just statues, and monuments are not just stone plinths and bodies cast in bronze. They instruct. They lift up the stories of those who are seen; dominate the stories of those who are unseen; and too often propagate menacingly incomplete accounts of our country's past. As the poet Adrienne Su writes of childhood picnics at Stone Mountain, the largest Confederate monument in the United States, "Nothing at Stone Mountain Park / echoed my ancestry, but it's normal for immigrants / not to see themselves in landmarks." Monuments might be seen only in the ephemeral moments of school field trips, but they remain marked in our collective memory with the pin and pencil points of a history-tracing compass.

As a poet, as a scholar and professor, and now as president of the Andrew W. Mellon Foundation, I have long explored answers to this question: "What can we do to create a commemorative landscape that speaks to the complexity of our history, educates us to better understand our collective past, and reflects the rich multiplicity of the American story?"

The Mellon Foundation has chosen to answer that question with a new five-year, quarter-billion-dollar commitment to bring a broader range of voices, stories and memories into our ongoing cartography of our country's history. We call this initiative the Monuments Project. Its grants will fund new commemorative spaces, new work that recontextualizes existing monuments and memorials, and — in some cases — the relocation of existing monuments or memorials. Because this is an initiative that will require perseverance, considerable resources, rigorous historical grounding and laser focus, the $250 million Monuments Project will constitute a significant portion of Mellon's grantmaking budget for the next several years.

Our urgent national dialogue around monuments, memorials and their influence on national narratives demands a grantmaking commitment of this dramatic scale. The Monuments Project will make both the full reach of our history and our many different forebears visible and known, and encompass broad public collaboration with artists, scholars, community activists and cultural institutions. It will expand the very meaning of monuments themselves to include the word, the act and the unexpectedly preserved spaces that move us to awed silence — from video footage of filmmaker Bree Newsome removing the Confederate flag from the South Carolina statehouse to poet and Vietnam War veteran Yusef Komunyakaa reading aloud his powerful elegy, "Facing It," about his visit to Maya Lin's Vietnam Veterans Memorial.

Robert Hayden, in his poem "Frederick Douglass," wrote of commemorating the great abolitionist "not with statues' rhetoric, not with legends and poems and wreaths of bronze alone," but instead "with the lives grown out of his life." Through the Monuments Project, the map we imagine will have its contours fully defined, its topography fully detailed, and its brave and innovative people fully represented. There will be soaring peaks of new artistic interpretations, broad valleys of new research and education and the long rivers of social justice movements and their many tributaries. Together, we will see, and we will honor, the America grown out of this abundance — the lives grown out of so many remarkable lives.

Elizabeth Alexander — poet, educator, memoirist, scholar, and cultural advocate — is president of The Andrew W. Mellon Foundation. She has held distinguished professorships at Smith College, Columbia University and Yale University, is a member of the American Academy of Arts and Sciences and a chancellor of the Academy of American Poets and serves on the Pulitzer Prize Board. Alexander composed and delivered “Praise Song for the Day” for the inauguration of President Barack Obama in 2009, and is author or co-author of 14 books, including "American Sublime" and "The Light of the World."