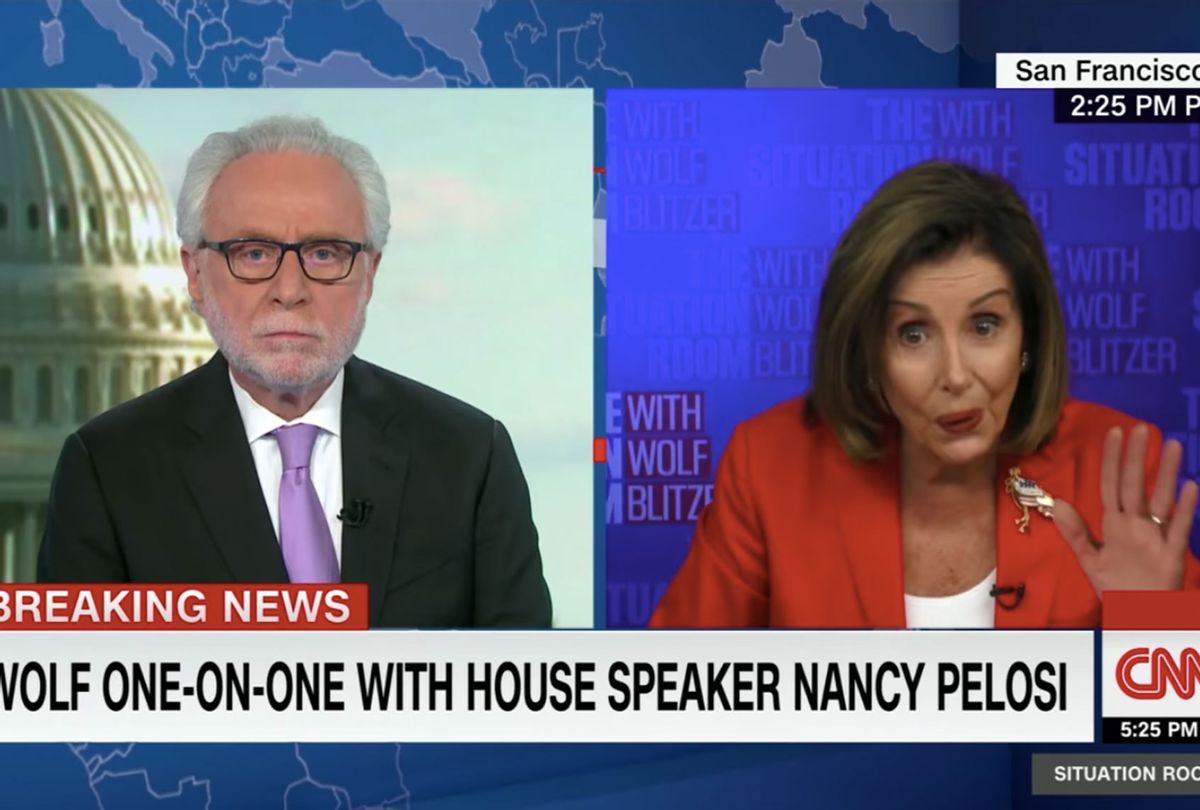 Speaker of the House Nancy Pelosi, D-Calif., got into a contentious exchange with CNN host Wolf Blitzer on Tuesday after he questioned why she had not accepted President Donald Trump's stimulus proposal.

House Democrats passed a $2.2 trillion proposal before Treasury Secretary Steven Mnuchin countered with a $1.8 trillion offer despite Trump's claim that he was shutting down negotiations. Among other measures, the offer includes $300 billion in aid for states and local governments, another round of $1,200 stimulus payments, $400 per week in supplemental federal unemployment benefits and lawsuit protections for businesses.

Democrats said the proposal was insufficient, calling for $400 billion in additional relief for states and cities and the unemployment boost to be increased to $600 per week. Democrats have also vowed to oppose the liability protections while pushing to add refundable child tax credits to help working parents.

Many Senate Republicans, pushing for a far lower price tag, called Trump's proposal a "betrayal" of GOP voters. Senate Majority Leader Mitch McConnell, R-Ky., said Trump's proposal was unlikely to pass with the Senate's focus on confirming Supreme Court nominee Amy Coney Barrett. He instead plans to force a vote on a $500 billion plan ahead of the election.

Blitzer suggested on Tuesday that Pelosi's reluctance was preventing the bill from passing, even though McConnell refused to negotiate for months after Democrats passed its first $3.4 trillion plan in May and has pushed back on the White House offer.

"Many Americans are waiting in food lines for the first time in their lives. Can you look them in the eye, Madam Speaker, and explain why you don't want to accept the president's latest stimulus offer?" Blitzer asked.

"I hope you'll ask the same question of the Republicans on why they don't want to meet the needs of the American people," Pelosi replied. "But let me say to those people, because all of my colleagues — we represent these people . . . and their needs are not addressed in the president's proposal. So when you say to me, 'Why don't you accept theirs?' Why don't they accept ours?"

"Excuse me for interrupting, Madam Speaker, but they really need the money right now," Blitzer pressed. "Even members of your own caucus, Madam Speaker, want to accept this deal."

Blitzer quoted Rep. Ro Khanna, D-Calif., the head of the Congressional Progressive Caucus, who cited the urgent need to get aid to struggling Americans quickly in calling for Democrats to back the proposal.

"We have a moral obligation to do something," Khanna said this week. "We are the party that stands for the working poor."

Pelosi dismissed Khanna's comments as she accused Blitzer of being a Republican "apologist."

"What I say to you is: I don't know if you're always an apologist — and many of your colleagues — for the Republican position," she said. "Ro Khanna, that's nice. That isn't what we're going to do."

"People need help now," she added. "But it's no use giving them a false thing just because the president wants to put a check with his name on it in the mail that we should not be doing all we can to help people pay the rent, put food on the table and enhance benefits."

Blitzer continued to press the speaker.

"There are millions of Americans who have lost their jobs. They can't pay their rent. The kids need the food," he said. "$1.8 trillion, and the president just tweeted, 'stimulus, go big or go home.' He wants more. Why not work out a deal with him and don't let the perfect, as they say here in Washington, be the enemy of the good?"

"I will not let the wrong be the enemy of the right," Pelosi responded.

"You know what? Do you have any idea what the difference is between the spending that they have in their bill and that we have in our bill?" Pelosi asked. "Do you realize that they have come back and said all these things for child tax credits and earned income tax credits, helping people who have lost their jobs are eliminated in their bill?"

Blitzer noted that former Democratic presidential candidate Andrew Yang had also called for Democrats to back the proposal.

"It's infuriating that so many Americans are hurting, and we're still waiting on a relief bill that should have been passed months ago," Yang told CNN this week.

Pelosi dismissed the remarks, arguing that neither Yang nor Khanna were not familiar with the bill's more arcane details.

Blitzer continued to press Pelosi on why she would not negotiate a deal directly with the president.

"With all due respect — and we've known each other a long time — you really don't know what you're talking about," Pelosi said, arguing that Blitzer did not "even know" how the money in the proposal would be spent.

Blitzer again cited Democrats who "want a deal, because so many people right now are suffering."

"You evidently do not respect the chairman of the committees who wrote these bills, and I wish you would respect the knowledge that goes into meeting the needs of the American people," Pelosi replied, accusing the host of "defending the administration all this time with no knowledge of the difference between our two bills."

"Madam Speaker, these are incredibly difficult times right now, and we'll leave it on that note," Blitzer said, trying to go to break.

Blitzer said it was "not about me" but struggling Americans.

"And we represent them," Pelosi said.

"Thanks so much for your sensitivity to our constituents' needs," Pelosi said sarcastically.

"I am sensitive to them, because I see them on the street begging for food, begging for money," Blitzer said.