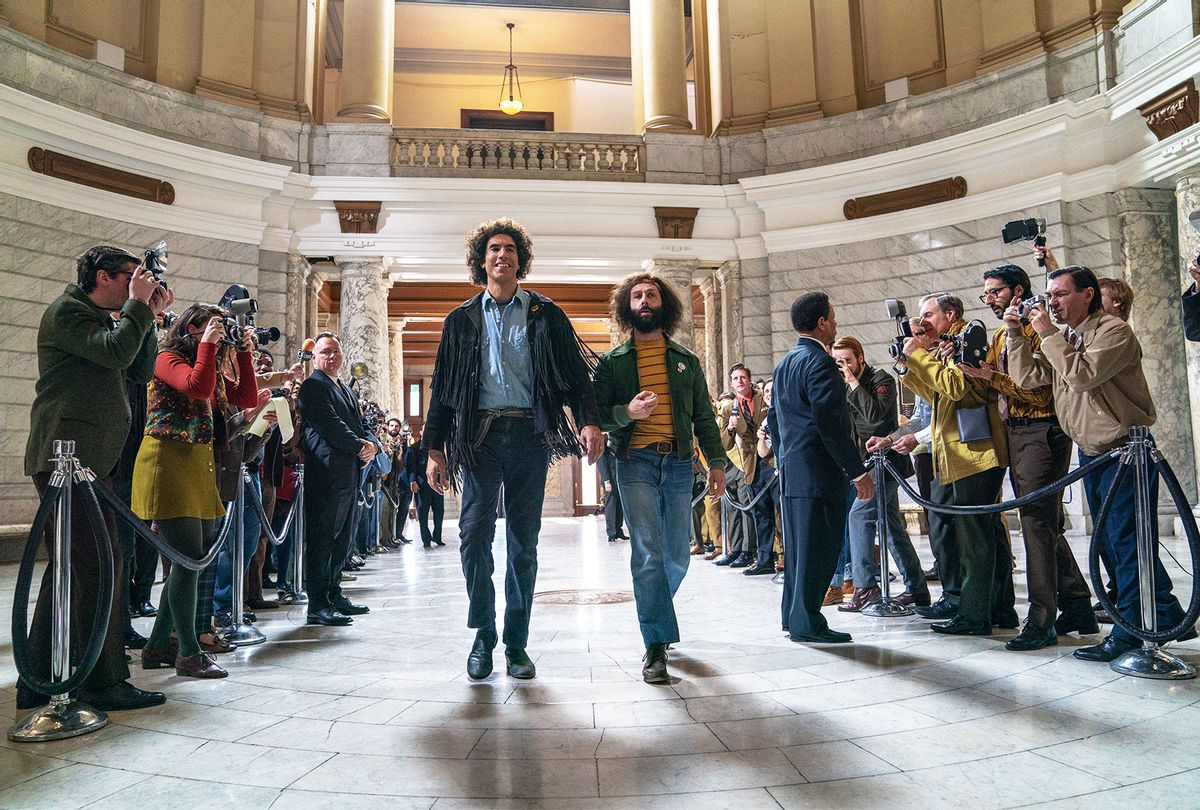 Trial Of The Chicago 7 (Niko Tavernise/NETFLIX)
--

Frequently "The Trial of the Chicago 7" resembles a 1960s-style heist flick as opposed a courtroom drama. This is most noticeable near the beginning of the film, as Aaron Sorkin ("The West Wing," "A Few Good Men") gives us a view of each of the eight famous anti-war radicals accused of conspiring to cause the riots at 1968 Democratic National Convention in Chicago prepare for their day in court.

The scene is a sequence of moments edited together featuring the likes of Students for a Democratic Society leader Tom Hayden, antiwar pacifist David Dellinger, notorious "Yippies" Abbie Hoffman and Jerry Rubin, and Black Panther Party leader Bobby Seale responding to the federal case thrown at them, one they're well aware is a load of bull.

This being Sorkin, the montage is executed as a signature walk-and-talk, only this one bounces between cities, homes and headquarters, connected by a vivacious '60s go-go groove bouncing in the background. As a whole it prepares the audience to witness a case that was supposed to be serious business that in the final edit is revealed to be a sham, pure theater – or as Hoffman accurately refers to it, a "political trial."

Sorkin wrote and directed "The Trial of the Chicago 7" in a style most suited to maintain the attention of the 2020 audiences, one that slaps more than it shocks and battles the story's inclination toward pure gravity. Part of this approach reflects the motley nature of the assembled defendants, who were charged as co-conspirators even though many had never met one another. Seale consistently reminds the jury and courtroom spectators that he doesn't have a lawyer present and, in fact, was only in Chicago for four hours to give a speech; he wasn't even present when the rioting took place.

But he didn't have to be. In this story the charges aren't connected to anything of concrete culpability but rather what these men symbolized. It wasn't about what they did but what and how they thought.

Sorkin's film is constructed to draw neon-bright parallels between this famous abuse of the justice system and the rampant inequities in our time.

Movies about pivotal cases in American history tend to be earnest showcases that pander more to the performer's abilities than the audience's interest. By inserting this 1969 court case into a cinematic genre that swings, Sorkin elevates the profiles of the eight civil rights activists railroaded by a government to the status of all-stars, as if to flip off the ghosts Richard Nixon and his Attorney General John Mitchell, two men who were eager to make examples of all the anti-war protesters making the administration look bad.

That said, "The Trial of the Chicago 7" is also quite plainly an actors' showcase – specifically for Sacha Baron Cohen, who plays the activist Hoffman, and Eddie Redmayne as Tom Hayden, although Yahya Abdul-Mateen II is unforgettable as Seale, spitting fire in the scene leading up to the judge ordering Seale to be gagged, chained and humiliated in full view of the jury and courtroom onlookers.

This is a repugnant moment in history begs to be recreated with the appropriate menace and depravity, and Abdul-Mateen II, along with Frank Langella's vicious presiding Judge Julius Hoffman, do it justice. (Originally Seale was part of the eight men grouped together on the conspiracy charge but, following that travesty, his case was separated from the other seven.)

Sorkin writes passionate exchanges for each of the ensemble's principal characters, underlining the real history inspiring each scene by interspersing archival footage of the actual riots and public figures connected to the case between dramatized frames at appropriate turns. But his most effective narrative ploy is to use Hoffman and Hayden as a case study of what happens when diametrically opposed styles of civil disobedience attempt to work toward the same goal.

Redmayne's Hayden is clean-cut, respectful of process and willing to appease authority up to a point while Hoffman and his compatriot Jerry Rubin (Jeremy Strong) wear their anti-establishment shagginess proudly and without apology. Together, they personify the central problems plaguing liberals to this day – that of an incomplete cohesiveness due to disagreements over conformity and propriety, of being so caught up in arguing over whether it's better to push change from the outside or work from within that they risk seeing opportunities for victory right in front of them.

Sorkin speaks to this notion through Hayden when he berates Hoffman, saying that thanks to hippie burnouts like him history will view the Vietnam-ear antiwar protests not as organized and righteous by a coalition of strategists, but as a mess of long-haired burnouts nattering on about flower power.

In that moment the filmmaker announces what he's seeking to avoid in case we haven't already noticed the effort. To Sorkin's credit, "The Trial of the Chicago 7" neither gets mired in any trappings of tie-dye and patchouli, nor does it collapse under the ballast of its own sense of seriousness.

By amplifying the crooked spirit of the injustice as it was served here as opposed to straining to accurately recreate the case blow-by-blow as dictated by courtroom transcripts, the uninitiated viewer can easily draw the lines from this story to present day government's efforts to curtail our First Amendment rights to protest.

Even those who aren't seeking out those thematic connections will no doubt enjoy Sacha Baron Cohen's effortless and lively portrayal of Hoffman and appreciate his effort to nail the real-life figure's Boston accent, along with John Carroll Lynch's take on Dellinger, a stalwart peacekeeper who can't help but break at one key moment when the circus-like proceedings devolve from ludicrous to dangerously unequal.

Langella channels the energy of a graphic novel supervillain as Justice Hoffman, a man tightly bound to etiquette and lawful propriety and who is obviously ready to render his guilty verdict long before the trial begins. The list of recognizable stars doing solid work here is lengthy, including Joseph Gordon-Levitt as do-gooder young federal prosecutor Richard Schultz and, in a memorable cameo, Michael Keaton as the previous administration's far more honest attorney general. People who enjoy watching Strong's work in "Succession" will be entertained by his hazy and passionate take on Rubin.

Together the actors make quite the watchable crew, companions and adversaries alike. And if "The Trial of the Chicago 7" doesn't quite come together as neatly as a viewer might expect of a story about a landmark case such as this, maybe that's in its favor. It may be messy, but it's fleet-footed and it means well, and in the way of any good caper flick it extols the virtue of breaking the law for all the right reasons, come what may.

"The Trial of the Chicago 7" is currently streaming on Netflix.