I grew up surrounded by toxic masculinity, but I evolved: We have to give people a chance to grow

When I hear calls to "divest" personally from straight Black men, I think about the lessons I learned as a boy 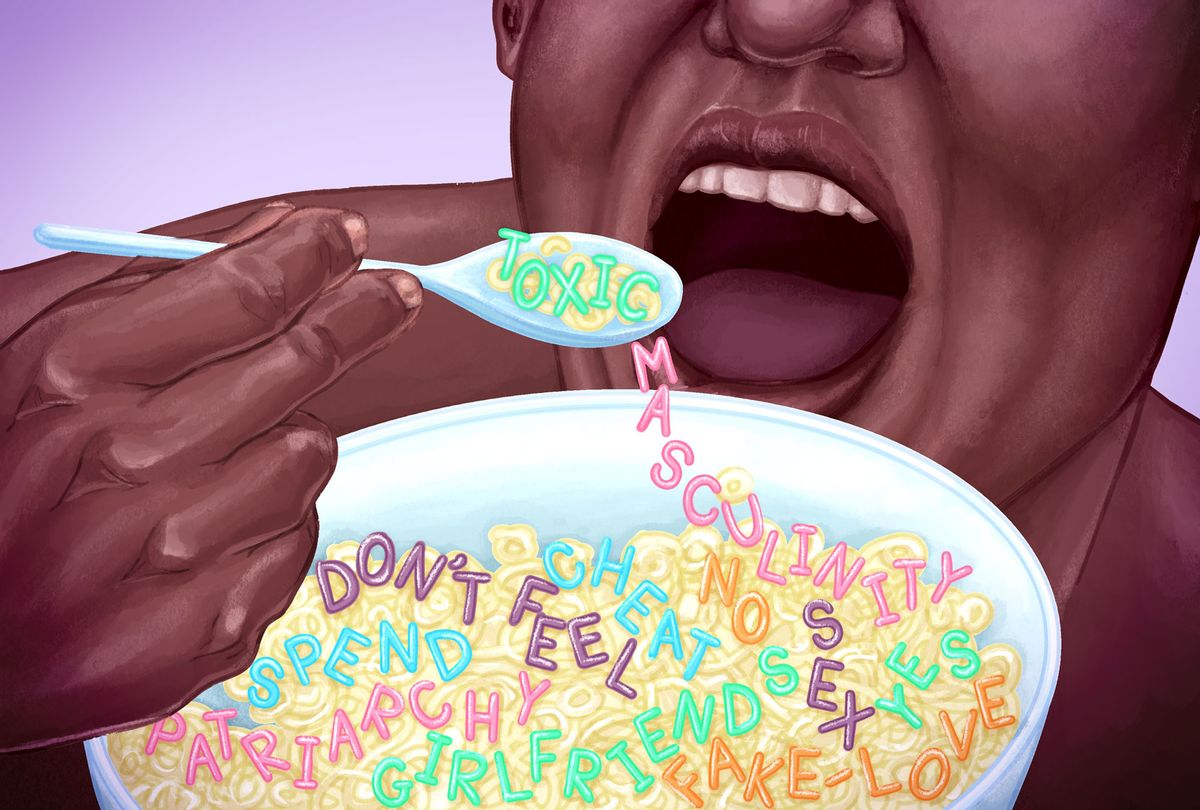 The most important lesson I continue to learn is that we have to give people a chance to grow. No one is born preprogrammed to deal with society and the way it constantly evolves. We learn and then we grow. This lesson has been weighing heavy on me lately when I see posts on social media about canceling whole groups of people, holding them collectively responsible for the actions of some.

When people call for others to "divest" from straight Black men, to cut them out of their lives entirely, I don't know what those individuals have been through. Something extremely traumatic, I imagine. I'm not going to be the corny guy popping up in their mentions like, "Not all Black men!" or "But what will you tell your Black son?!" As I'm sure they've heard those arguments before .

I don't have a direct rebuttal to the posts that tear apart my gender and sexuality. I respect the people behind the sentiment. But I can offer a glimpse into the reality I was raised in. It's not universal, but it is a reality many Black boys have shared.

In 1991, boney preteen me, in my football or basketball jerseys with jeans and the latest Nikes, suddenly had a new major interest: pretty girls and how to date them. I turned to the older dudes on my block, the ones on the corner: "How y'all get girls, what y'all be sayin?" They always kept a girlfriend — girlfriends — and all kinds of women from places far away from east Baltimore would visit them on our little block.

At that point the idea of monogamy didn't exist in my world. My dad was with my mom, but I didn't have an understanding of the inner workings of their relationship — no memorable language, no burst of affection or lovey-dovey gestures — that I could hang a concept of monogamy onto. I knew they loved each other, but they didn't seem to be madly in love, or even having much fun — at least not as much fun as the older dudes on my block seemed to be having with their lady friends.

"Aye Lil D, yo — if she say hi to you before you say hi to her, that mean she tryin have sex with you," they told me.

These guys were my teachers­ outside of school, outside of home — the OGs, the big homies. They'd pile up on the corner with their white teeth all evenly wrapped in gold crowns, rubber-banned beepers and new sweatsuits, gold chains hung over Hilfiger logos on their polos and hoodies with crosses dangling. I dressed like a little version of them.

"Fake-love them girls, and then leave them girls. And date their friends too," they'd preach. "Never call a girl right after she give you some!" That's normal, they promised me, before giving me cash to spend in my attempts to imitate their looks and lives.

"You a virgin?" they'd ask me when I was as young as eight years old. "You better not be!" they'd laugh.

They were like a street corner choir sponsored by Air Jordans, narrating my formative years: Never apologize, never have regrets, never let them see you sweat. Men don't need, men don't feel, men can't be hurt. Real men hurt them — and them and them over there too.

They always sounded sad but looked happy, and when they sounded happy they looked sad. I felt like they were wrong before I knew they were wrong. But they were still an influence on me.

"Don't listen to them dumbass guys," Dad would tell me. "They only get girls because they spend, spend, spend. And you don't want to be with nobody like that. Trust me."

But Dad's was a flawed lesson, too. He might not have meant to, but he was teaching me that on the block there was no space for non-transactional relationships between men and women. Without talking to the older guys on the block, or having relationships with any of the women they knew, my father reduced their relationships to money. I trusted my dad, but I felt he was wrong. I hung on the corner, and I knew it wasn't all about that.

And I wanted to impress the women I liked and I wanted to be liked. I thought those older guys could teach me that. I trusted them, but they were wrong too. They lied to me, to all of us young boys who were new to ideas of sex and romance.

They said no really means yes and yes means yes, that basically everything is yes. Don't hold or kiss women in public, and never say I love you. All women are replaceable, they told us. Being in love is stupid.

"They don't like suckas who open doors, who fall asleep on the phone, who always available!" The older dudes preached. "Who like an always-available-ass guy, anyway?"

"Don't listen to them dumbass guys," my dad repeated. "Trust me."

Ultimately, I trusted my dad because he was my dad. He didn't have all of the answers the way those other dudes pretended to, but he planted a seed inside me that forced me to question their teachings. Their sad looks said more to me than their happy words.

We can't move pass the sins of our elders if we blindly follow them, and my dad saved me from that. Teaching me to question allowed me to be open to learning new ways of connecting with women, of understanding love, and of pushing back against our patriarchal system and its many ways of oppression. Questioning has also allowed me to be open to the idea of looking at those older dudes from my block as victims. It's not a popular opinion, but I believe it to be true.

Why'd they hold and share so many predatory thoughts and sexist ideas? No one is born objectifying and hating women. That's learned behavior from a toxic culture. Those thoughts were planted in the older dudes from my block — and in my father, too — and then passed down to my friends and me, where they became the source of trauma, self-inflicted and inflicted on others, until I became aware of my actions, acknowledged my flaws, and tried to make amends.

I was raised to be an asshole. Luckily, I evolved. I was given the space to grow and change, and then to help others enlighten themselves so they can do the same. Now I advocate for love and equality for all, even if you hate my guts. My days are spent serving the women in my family and trying to use my art to highlight other oppressed groups fighting to be heard because I was lucky enough to have experiences that prompted me to question what I was being taught, not because I'm inherently a better person.

Men who want to abolish patriarchy have to do the work, educate themselves and challenge other men to do the same. Women and nonbinary folks don't have to celebrate the men who are making these strides to change. But writing them off as attention seekers or movement jackers — or dismissing them as incorrigible — is misguided.

In her 2004 book "The Will to Change: Men, Masculinity, and Love," acclaimed scholar bell hooks writes:

"To create loving men, we must love males. Loving maleness is different from praising and rewarding males for living up to sexist-defined notions of male identity. Caring about men because of what they do for us is not the same as loving males for simply being. When we love maleness, we extend our love whether males are performing or not. Performance is different from simply being. In patriarchal culture males are not allowed simply to be who they are and to glory in their unique identity. Their value is always determined by what they do. In an anti-patriarchal culture males do not have to prove their value and worth. They know from birth that simply being gives them value, the right to be cherished and loved."

Racism erases a huge chunk of straight male privilege for Black men. Simply being does not automatically give us value in this culture. Our straight male privilege covers the ability to walk down the street without being sexually harassed and to be picked first on predominately white basketball courts. A few of us are granted job opportunities based on a Cool Black Guy cliché we shouldn't have to fulfill, which means we are often the only Black man, or one of a few, in the office — blessed enough to be pulled from the pool of Black men who aren't finding work at all. After all, we are still men, and patriarchy demands men fulfill the Great Provider stereotype even when society prohibits us from doing so, throwing many of us into underground economies and after that, the carceral system or death.

A dose of our own medicine can feel fair at first. But it will leave us all divided, and ultimately dead. Straight men of all races and ethnicities need to acknowledge our privileges, understand the damage we have caused historically and work to dismantle patriarchy. But to do so in a culture where it's becoming acceptable, even normalized, to write us off entirely won't help build a positive movement as fast as leaving a door open for us will as we continue to do the work of questioning what we were taught — and teaching the younger generation to trust us, but keep questioning too.