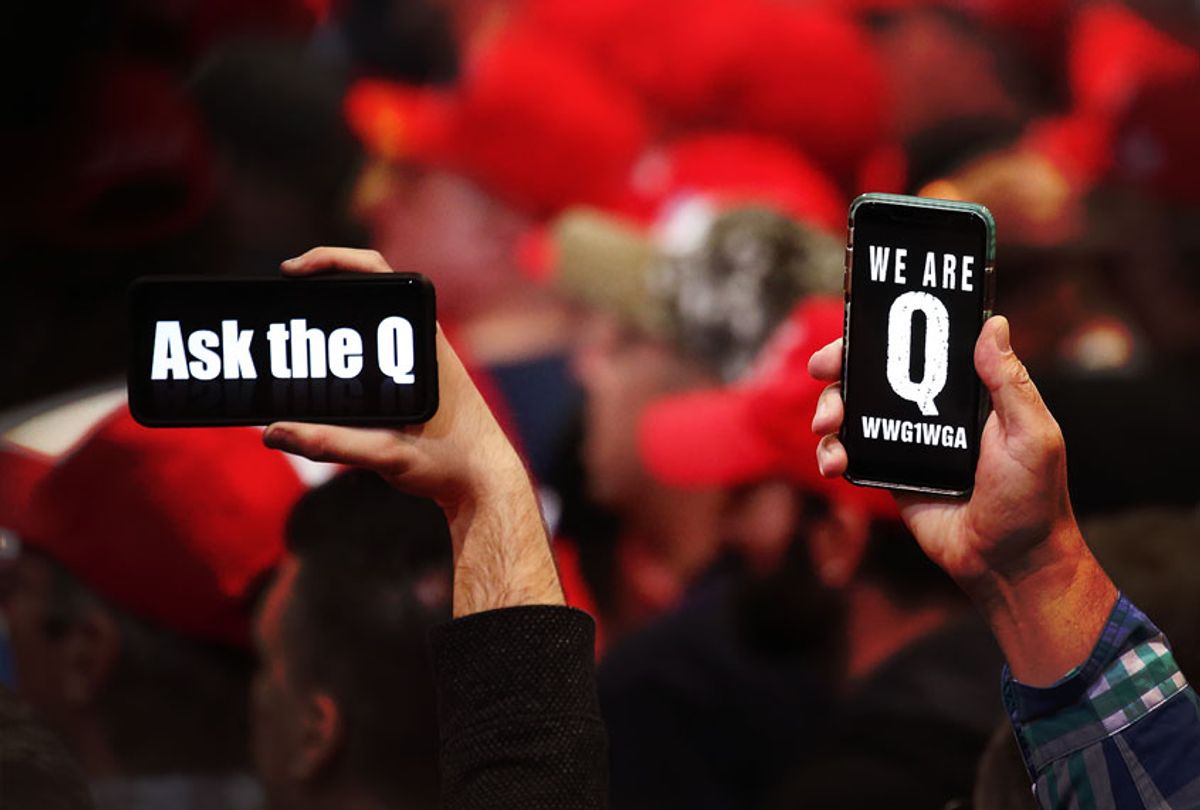 As outlandish as QAnon's beliefs are, the conspiracy cult has been gaining ground in the Republican Party. A Yahoo News/YouGov poll finds that roughly 50% of President Donald Trump's supporters now embrace at least some of QAnon's claims.

QAnon believes that the United States' federal government has been infiltrated by an international cabal of pedophiles, Satanists and cannibals and that Trump was put in the White House to lead the fight against the cabal. According to the fictional belief set, an anonymous figure named Q is providing updates on Trump's battle. And one of QAnon's beliefs is that R&B superstar Beyoncé isn't really African-American but rather, is really an Italian woman named Ann Marie Latrassi who is passing herself off as Black as part of the conspiracy.

The poll also asked, "Do you believe that President Trump is working to dismantle an elite child sex trafficking ring involving top Democrats?" — to which 52% of Trump supporters responded "yes," while only 4% of Biden supporters said "yes."

Yahoo News reporters Andrew Romano and Caitlin Dickson note that only 16% of Trump supporters who were familiar were QAnon were willing to dismiss the entire movement as conspiracy nonsense that has no basis in fact.

The inroads that QAnon has made in the GOP were evident when, in August, QAnon supporter Marjorie Taylor Greene won a Republican congressional primary in Georgia. Because her district is overwhelmingly Republican, Greene will likely win the general election on November 3 and be sworn into the U.S. House of Representatives in January 2021.

Well-known Republicans who have made donations to Green's campaign include Rep. Jim Jordan of Ohio and White House Chief of Staff Mark Meadows. And after her primary win, Trump congratulated Greene on Twitter and exalted her as a "future Republican star."

Nina Jankowicz of the nonpartisan Wilson Center told Yahoo News that it's "really crazy" that "such a high number" of Trump supporters embrace QAnon's conspiracy theory.

Jankowicz explained, "It seems, increasingly, like we're dealing with two different sets of facts in this country, sometimes more. The fact is that QAnon is a movement, a conspiracy that has been cited by the FBI as potentially inciting terrorist and other violent extremist acts in this country. It shouldn't be something that we're this split (on) along partisan lines."

During a recent town hall event hosted by NBC News, moderator Savannah Guthrie grilled Trump about QAnon — and he maintained, "I know nothing about QAnon." But Trump added that from what he has heard, "They are very strongly against pedophilia, and I agree with that."

Jankowicz told Yahoo News, "The fact that we have so many political candidates who are public adherents of QAnon and a president who himself has refused to disavow the theory (amounts to) a tacit endorsement of a different set of facts. That's what's really worrisome about it."