Let's imagine the unimaginable: A second term for Donald Trump

After the shock of November 2016, we have to face this possibility: How bad will Trump 2.0 get? Pretty damn bad 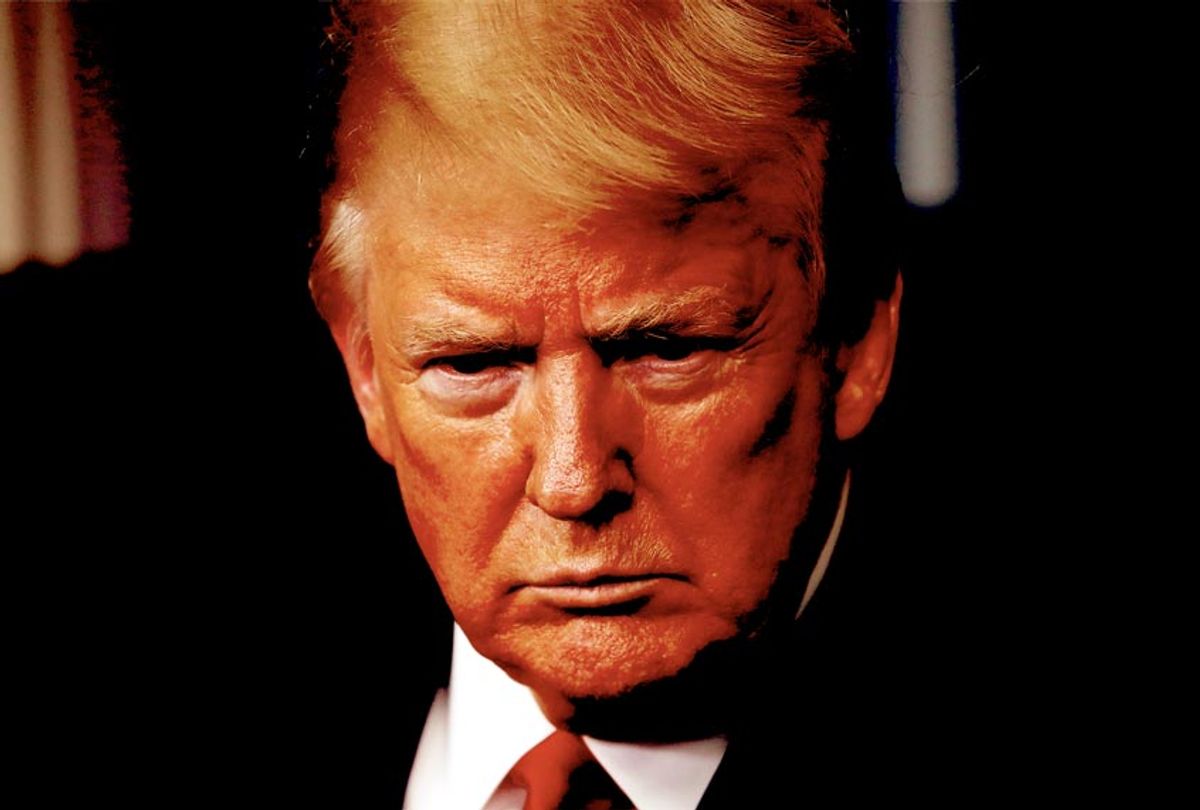 Four years ago, nearly everyone, including Donald Trump himself, was convinced Hillary Clinton was all but guaranteed a resounding victory. I remember articles predicting that Clinton would win the entire East Coast, including South Carolina. Later, following the third debate of that campaign season, I distinctly recall watching Steve Schmidt on MSNBC announcing in his dramatic monotone, "Hillary Clinton will be the 45th president of the United States." Election forecasters from Nate Silver to Sabato's Crystal Ball agreed.

None of that happened, of course, for a variety of reasons, including the attack by Russian military intelligence and what I've been calling the "American nervous breakdown." Sixty-two million of our fellow citizens lost track of right and wrong — brainwashed by a daily infusion of propaganda crapped into the world by Russian troll farms and the conservative entertainment complex. Millions of us lost track of why experience and presidential character were important, and the ideals of humility, decency and honor were rejected in favor of immature trolling, and petty vengeance.

And how'd that work out, Trump voters? Our republic is in worse shape today than it's been in a century, perhaps since the Civil War. Hundreds of thousands of us are dead due to Trump's herky-jerky response to a global pandemic. America is a global pariah. The economy is considerably worse than it was four years ago and 40 percent of our nation's grownups continue to be willingly suckered by a maniacal, sociopathic con man.

So sue me for being Captain Scarypants again, but despite the polls showing Joe Biden with a seemingly formidable lead, I'm still greatly concerned that Trump will somehow scam and sue his way to a second term. If he does, what will that mean for the United States?

With Trump, there's no way to know precisely what he'll do from moment to moment, much less next year or four years from now. As we've witnessed, his thing is to jump from childish vendetta to childish vendetta, and one transactional blunder after another. His actions, as always, will depend greatly on how whiny and victimized he feels. And he's always whining.

Even though there's no time-traveling DeLorean that enables us to forecast what another four years of the Trump crisis will look like, I can think of five specific things that will absolutely happen.

Trump will prosecute dissidents. He's already started with the Black Lives Matter protesters earlier this year, but now he has a real taste for it. No matter what, Trump will sue to have vote-by-mail ballots thrown out, and will appeal any adverse decisions all the way to the Supreme Court. In the process of doing so, protests will likely erupt, giving Trump his first post-election opportunity to order his secret police to gas, shoot and arrest protesters. He's already threatened to do exactly this, telling his loyalists, "Our country is gonna change. We're not gonna allow [more anti-Trump protests] to happen." Last week Trump bragged about what looked an awful lot like the extrajudicial murder of an American citizen by U.S. marshals in Washington state. Expect much more of that. As Michael Cohen wrote in his book, "Trump never actually jokes."

Conservatives will own the Supreme Court for a generation. Unless something emerges that forces her to withdraw, it looks like Amy Coney Barrett will be confirmed, giving conservatives on the high court a clear majority of 6-3. Meanwhile, Stephen Breyer, one of the three remaining Democratic appointees, is 82 years old, so it's reasonable to assume he'll retire or pass away within the next four years. Trump will name his replacement, leaving Elena Kagan and Sonia Sotomayor as the last remaining liberals. If Clarence Thomas or Sam Alito decides to retire, Trump could add another justice or two, extending conservative control for 25 more years, and the ideological regression of America will be turbo-boosted to "ludicrous speed."

The pandemic will continue for years, not months. Trump has no intention of doing what's right. He never has. His genocidal "herd immunity" plan will continue to infect millions, while the CDC will be neutralized. In terms of a vaccine, if the scientists vouch for it, Trumpers won't take it, and if Trump vouches for it, everyone else will refuse to take it. As long as Trump is president, we'll be dealing with COVID-19 for the foreseeable future. I have no idea how our society can endure given all that, and my worst fear is that we'll have no choice but to live with the ongoing threat of infection and death.

We'll lose more time to slow or stop the climate crisis. Like the pandemic in a second Trump term, it's likely we'll end up resigning ourselves to the reality of the climate crisis, choosing to mitigate the symptoms rather than solve the problem — Trump's "it is what it is" approach. At this point, even if Trump rejoined the Paris climate accord tomorrow, and even if all the signatory nations did exactly what they need to do, global temperatures will likely still increase by 5.4 degrees Fahrenheit. The West Antarctic ice sheet is slowly melting into the sea. Greenland's ice sheet has passed its point of no return. Instead of focusing our attention on preventing our own extinction, we'll end up wasting the next four years resisting Trump while digging and scratching just to hang onto the last shreds of our democracy and national sanity.

Truth will be further eroded as QAnon becomes a dominant GOP voting bloc. It's always possible this fad retreats back to the margins, but for the moment, the Republican Party has grappled itself to this underground society of suckers and weirdos. Party leadership already recognizes the Q people as a necessary voting bloc — a subsidiary of Trump's Red Hat army. Trump, the nominal head of his party, has retweeted QAnon tweets, and last week during his NBC town hall, he practically lionized the group as noble opponents of pedophilia (just after saying he knows "nothing" about them). If the president fully embraces QAnon gibberish about the "deep state," and if that metastasizes in the political debate, it could end up helping Trump ascend to monarch status on a mountain of anti-"deep state" horseshit, granting him carte blanche as Congress and the bureaucracy are rendered (even more) impotent.

Apart from these catastrophes, the thing that keeps me up at night is the basic notion that a sham re-election will endow Trump with the false perception of a mandate. Remember in 2004, after George W. Bush narrowly won re-election? One of the first things he announced was, "I earned capital in the campaign, political capital, and I intend to spend it." Now imagine Trump saying the same thing, then acting accordingly. It's terrifying to consider the institution-crushing actions he'll take with his "capital."

The best approach? Assume the worst. He's given us no reason to assume otherwise. I fear he'll attempt to establish himself as the American Putin, maybe creating a new title and post for himself so he can remain in power, while juggernauting through the last roadblocks toward a full-on kleptocracy. Suffice it to say there are untold hazards ahead, with each hammer-blow further stripping away our constitutional system until America more closely resembles Russia — dismal, depressed and undemocratic.

I hope I'm wrong about all of this. But based on what we know about Donald Trump, as well as the sinister end-of-days cranks helping him along, I can't in good faith trust that things will transpire normally. We've got a Pandora's Box full of reasons to believe our country has been seized by villains who don't care whether the entire system is crushed under Trump's ponderous bulk. Given everything that's happened, I worry that they've covered their bases with election-stealing contingencies that include shenanigans we haven't even considered yet. After the shock of election night four years ago, I'm not willing to take anything for granted, including the polls.

There is also reason to believe an unprecedented coalition of American voters will successfully oust Trump, while perhaps humiliating him and his idiocratic movement back to the permanent margins of our politics. This has to be the result of the election. After all, the choice is either a decent, experienced man (who you might disagree with on policy) or a shrieking, saucer-eyed con artist who dry-heaves lies and incarcerates children while bragging to his cult about murdering American citizens. There are 14 days left to make sure it's not the latter outcome. If everything works out the way it should, I'll be thrilled to retract everything I wrote today. Please, America — make me do it.