It's impossible to watch the new documentary without thinking of the upcoming election. Consider it a prequel 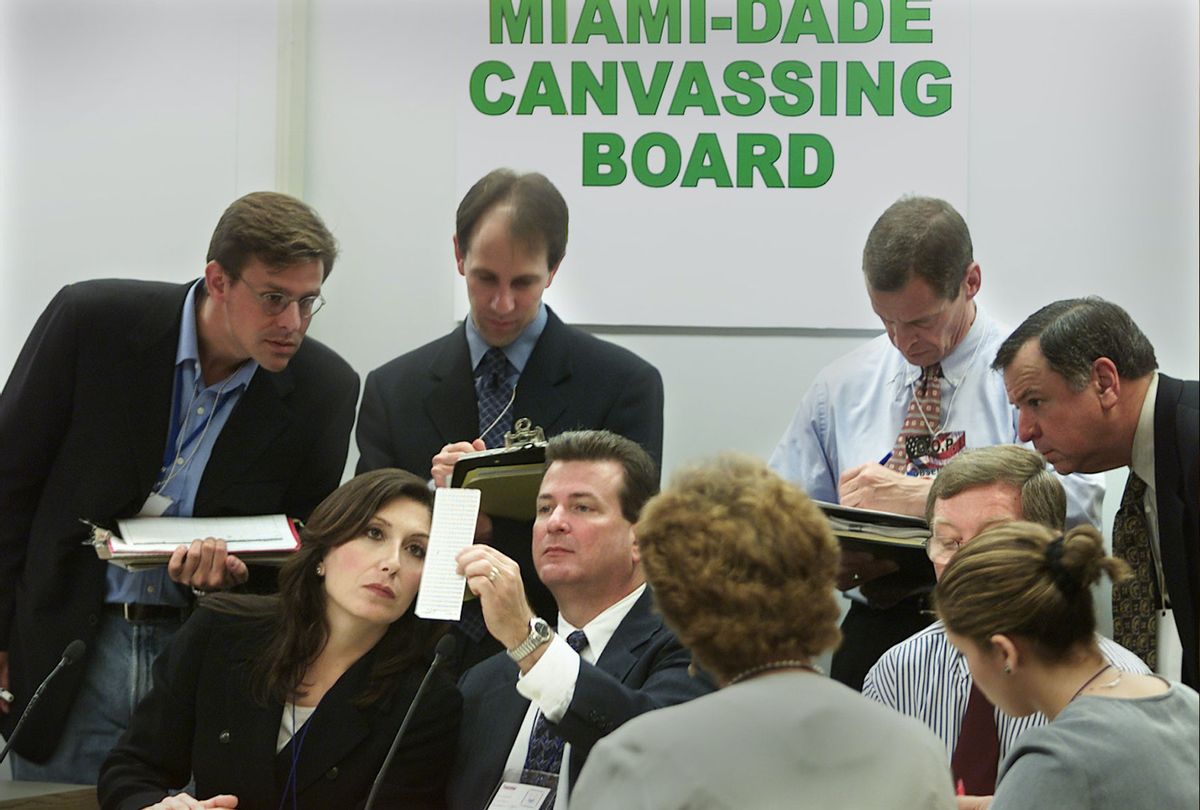 Miami-Dade Canvassing Board during the 2000 election (Getty/HBO)
--

It's basically impossible to watch HBO's "537 Votes" without thinking about Nov. 3. The thrust of the documentary, which traces the complexities of the 2000 Florida recount, is found in the chaos and the uncertainty surrounding the election results. This year feels ripe for a repeat as questions about early and mail-in voting abound amid postal service lags, and as President Trump has yet to guarantee a peaceful transfer of power if he loses the election.

As such, it makes sense to view the Billy Corben-directed documentary as both a prelude to this year's election and as a greater warning about political strategy in unprecedented times. As Rick Sanchez, a Cuban-American Miami TV anchor puts it in the film, "While Democrats are sitting around trying to figure out how to do the right thing, Republicans are figuring out how to win."

"537 Votes" opens nearly a year prior to the fateful election, when 5-year-old Elian González was found clinging to an inner tube about three miles off the Florida coast. His mother, Elizabeth Brotons Rodríguez, had drowned while attempting to leave Cuba with Elian and her boyfriend. Rodríguez had family in Miami's Little Havana, while Elian's biological father was still in Cuba.

As the families began to tussle over the boy's custody and future, the nation — but especially Florida — was swept up in the dispute as well. As the documentary lays out, the popularity of Alex Penelas, the Cuban-American executive mayor of Miami-Dade County, surged in the meantime.

He was young, handsome, charismatic and unwavering (at least initially) about his stance on keeping Elian in the States. "We will not lend resources, [including] police officers, to assist the federal government in any way, shape or form," Penelas said at the time.

While eventual Democratic presidential nominee Al Gore broke ranks with the Clinton administration, saying that he felt the case could have been handled in family court, the Clinton Administration's Justice Department ultimately approved a raid to take custody of Elian.

It was a decision that ultimately alienated Cuban-American voters from the Democratic party, while also ensuring that Gore was isolated from much of Bill Clinton's presidential administration.

Most voters who remember the 2000 election will likely remember this event as background noise that was eventually overshadowed by the talk of uncounted votes and hanging chads, but what Corben manages to do in this documentary is neatly explain how the Elian case ultimately served as a catalyst for the recount (and essentially the end of Penelas' career), while also laying the groundwork for the Republican near-bloodsport political play that is so well-known today.

While Democrats focused on decency and democracy, Corben asserts, Republicans focused on conquest. "Politics is about winning," Roger Stone, who is one of the main voices for the Republican side in the documentary, says matter-of-factly to the camera.

The controversy over the handling of Elian's future takes up just over the first half of the documentary, and it's telling is pretty stylish. Much like HBO's "McMillions," "537 Votes" elevates what could have been a bone-dry political retelling with that era's cultural markers: "Everybody Dance Now" by C+C Music Factory, clips of "Saturday Night Live," excerpts of "South Park," montages of local newscasters detailing the events of the day and the immediate communities' responses.

In contrast, the second half of the documentary can feel a little anemic at times. It's the part of the story with which everyone is more familiar, but lacks sit-downs with the key figures who propelled the recount or were involved in the election. It makes sense that Gore and George W. Bush wouldn't speak for a documentary of this scope, but the local experts who were integral to shaping Elian's narrative for new audiences just don't have quite the heft needed to further illuminate the recount and the surrounding drama which has already been well-trodden through the 2008 HBO film "Recount."

But Corben ultimately sticks the landing by encapsulating how politics has descended from a place where political rivals were viewed as opponents, rather than enemies — a message that intensely resonates in preparation for the upcoming election as the country feels almost irreparably divided. While imperfect, "537 Votes" succeeds in making the tumult and social upheaval of 2000 feel fresh again, while also delivering additional nuance to the story that may have been lost over the last two decades.