A lower court had ruled that the ban violated the Constitution, as well as the Americans With Disabilities Act 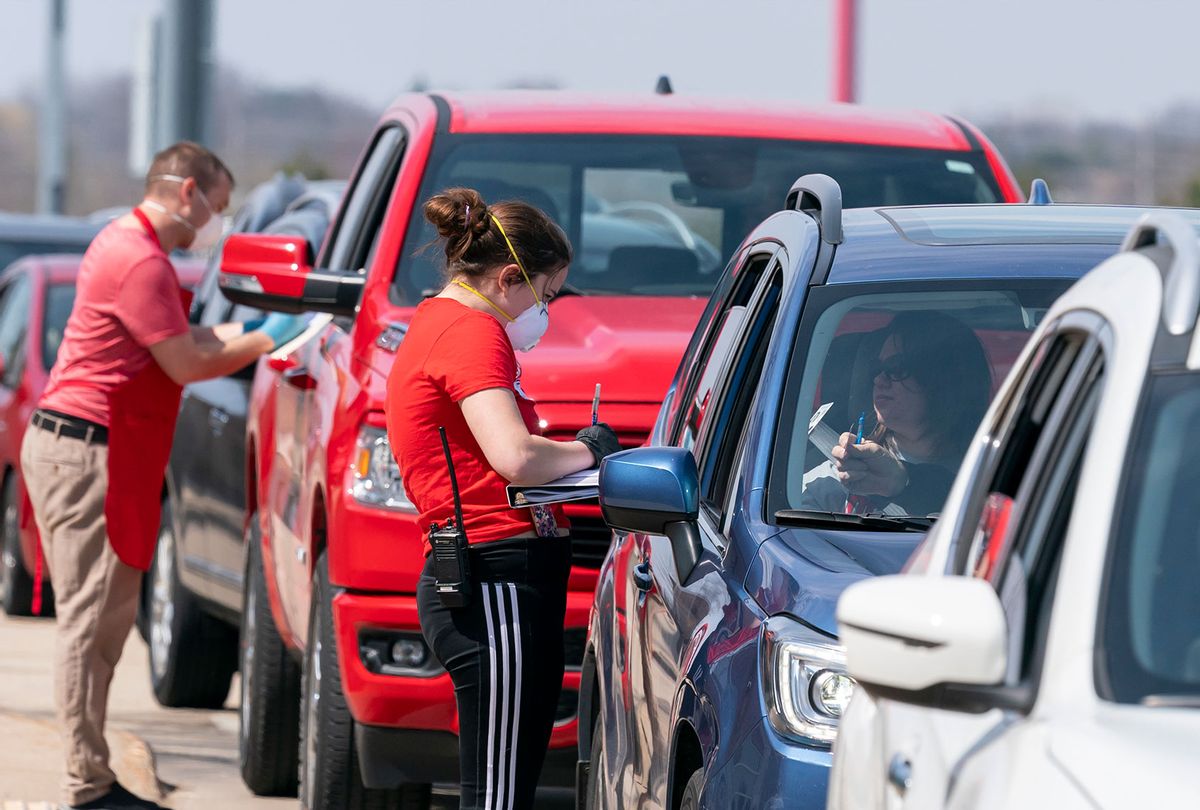 Poll workers take ballots during curbside voting on April 7, 2020 in Sun Prairie, Wisconsin. Residents in Wisconsin went to the polls a day after the U.S. Supreme Court voted against an extension of the absentee ballot deadline in the state. Because of the coronavirus, the number of polling places was drastically reduced. (Andy Manis/Getty Images)
--

A divided Supreme Court on Wednesday allowed Alabama to ban curbside voting amid the coronavirus pandemic without explanation.

Some Alabama counties with large numbers of Democratic voters had planned to allow curbside voting to accommodate people with disabilities and increased coronavirus risk, according to NPR. But Republican Secretary of State John Merrill banned counties from doing so without any exceptions.

A federal district court had previously ruled that the ban violated the Americans With Disabilities Act. The ruling was upheld by a federal appeals court before the Supreme Court issued a 5-3 decision granting the state's request for a stay of the lower court rulings.

The ruling came down from the Supreme Court's emergency or "shadow" docket, which does not require justices to explain their rulings. The court's five conservative justices, who all voted to stay the rulings, did not offer an explanation for their decision.

"If those vulnerable voters wish to vote in person, they must wait inside, for as long as it takes, in a crowd of fellow voters whom Alabama does not require to wear face coverings," she wrote.

Sotomayor cited the case of Howard Porter Jr., an elderly Black man with asthma and Parkinson's disease, who said during his testimony that his ancestors had died for his right to vote.

Sotomayor said Jefferson and Montgomery counties "are ready and willing to help vulnerable voters like Mr. Porter cast their ballots without unnecessarily risking infection from a deadly virus."

Merrill argued in a Supreme Court brief that "some level of risk is inherent in life and in voting, pandemic or no."

A brief from the plaintiffs argued that "counties have employed curbside voting as recently as 2016 and 2018, even though state law expressly gives counties broad authority to assist voters with disabilities and to manage elections, and even though denying such access for high-risk voters violates the Constitution and the Americans With Disabilities Act."

Sotomayor wrote that the high court should have upheld the lower court ruling, which "does not require all counties to adopt curbside voting" and provides a remedy that "respects both the right of voters with disabilities to vote safely and the state's interest in orderly elections."

She added that Merrill "does not meaningfully dispute that the plaintiffs have disabilities, that COVID-19 is disproportionately likely to be fatal to these plaintiffs, and that traditional-in-person voting will meaningfully increase their risk of exposure."

Sotomayor also noted that in-person voting was easier in Alabama than its cumbersome mail-in voting process, and the Centers for Disease Control and Prevention recommended curbside voting amid the pandemic.

The Supreme Court has heard numerous voting access cases in recent weeks. On Monday, a split 4-4 ruling allowed Pennsylvania to accept mail-in ballots up to three days after Election Day — even if they do not have a clear postmark — after a challenge from state Republicans. Earlier this month, the Supreme Court granted a Republican request to restore a witness signature requirement for absentee ballots in South Carolina.

The court is expected to rule on a Republican challenge to a state-court-approved agreement allowing North Carolina to accept clearly postmarked absentee ballots up to nine days after Election Day. It is also expected to rule on a request from Democrats to restore a federal court order requiring Wisconsin to accept postmarked mail-in ballots up to six days after Election Day.

Rick Hasen, a professor at the University of California Irvine School of Law, said the Supreme Court's deference to states over federal courts on voting safety concerns "would seem to bode poorly for the attempts by Democrats and voting rights groups" seeking to extend mail-in ballot deadlines.

"Any more federally ordered voting changes that make their way to the Supreme Court before the election face a steep uphill climb," he wrote.

With Supreme Court nominee Amy Coney Barrett expected to be confirmed by the Senate as early as Monday, Democrats may face dimmer odds in election-related cases even if Chief Justice John Roberts joins liberals as he did in the Pennsylvania case.

"This cake is baked as far as a future Coney Barrett justice of the Supreme Court is concerned," Sen. Richard Blumenthal, D-Conn., who sits on the Judiciary Committee, told The Washington Post.

"There is no reason to think she would not be the fifth vote" in a case, he said, "that could end up "throwing out millions and millions of ballots."